On the corner of Stevens and Sprague, something is cooking to a crisp.

It could be either fried chicken or catfish, but it is certainly from Chicken-N-Mo, the Southern-style restaurant that’s fed Spokane and beyond since Robert Hemphill opened shop in 1992.

After years of great eats, community service and three generations of family business, Hemphill and his wife, Teresa, are celebrating Chicken-N-Mo’s 30th anniversary, making them the oldest Black restaurant in downtown Spokane.

Hemphill has always been a business man. A Fairfield, Texas native, his mother’s community service and keen eye for what people needed inspired him to provide effective assistance. A cab and house painting company were his first businesses before Chicken-N-Mo.

“If there is a need, and you fulfill people’s needs, you’ll always be successful,” Bob Hemphill said. “I saw that, and, for Southern foods, there was a need for it in the downtown area.”

So, on July 1, 1992, Chicken-N-Mo opened for business. Bob built his work ethic on his favorite business word: expectation.

“I always go in with the expectation that you’re going to receive everything that you ask for,” he said. “You’re going to find everything you seek and every door you knock on is going to open. We only expect greatness.”

The very first menu featured hot dogs, hamburgers and chicken, with typical sides. Chicken-N-Mo sold out on the first day of business.

Bob’s decision to introduce Southern cuisine to Spokane was not only a fantastic business move, but a decision that stamped Chicken-N-Mo as a local cultural asset.

Teresa Hemphill is a retired fifth -grade teacher who’s had a hand in the restaurant’s longevity. She grew up in Orange Mound, the oldest Black neighborhood in Memphis. The two met at a Calvary Baptist Church service in 1994.

“They saw greens on the menu and asked, ‘What is that, a salad?’ ” Teresa Hemphill said. “Bob introduced a lot of foods like the greens and gumbo, because they never heard of it or never had it, but they were always open to it and people were receptive.”

Bob has taken different cooking styles from areas all over the nation. His chicken is coated the “Illinois way,” while his catfish cooking techniques are from Wisconsin. The Hemphills grabbed Chicken-N-Mo’s floor plan from a restaurant in Montana, and their pulled pork is coated in Carolina sauce.

They still honor the classic Southern ingredients that make the meal. Their gumbo seasoning? Shipped in from the stew’s birth place, New Orleans. 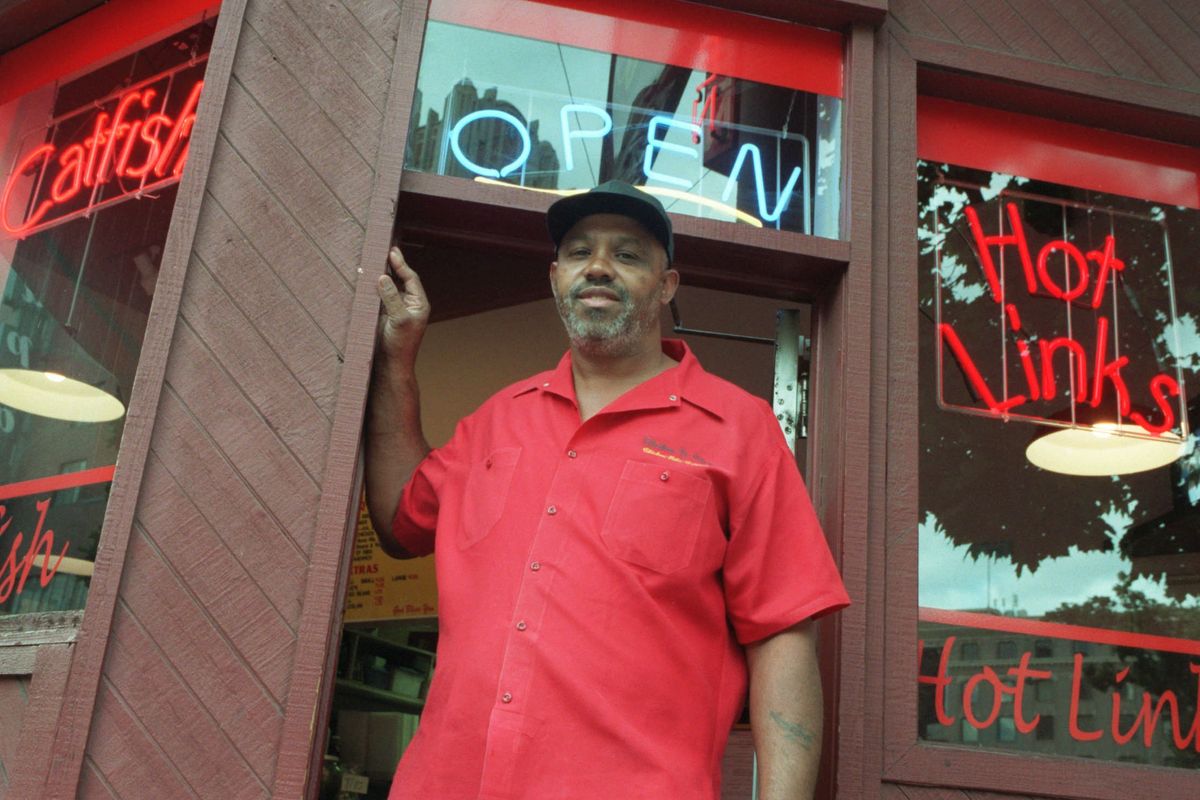 Bob Hemphill in a 1997 portrait in front of Chicken-n-Mo before it moved. (The Spokesman-Review photo archive)

In their world of culinary creation, Chicken-N-Mo’s catfish is crisped to a golden light brown that melts on immediate contact with your tongue. Their twangy garlic sauce adds character to the perfectly breaded fish. Ribs are smoked down to perfection with the restaurant’s original barbecue sauce, which is sold in Rosauers, Egger’s Meats, Huckleberry’s and Yoke’s due to its high demand.

“He created the sauce himself, and he calls the sauce a Texas-Tennessee blend because it’s more spicy and, up here, the sauce is a lot sweeter,” Teresa Hemphill said.

Teresa mentioned market runs throughout the community that turn into meet-and-greets with customers complimenting the restaurant’s addition to the city.

Bob knows everyone. Everyone knows Bob.

“He’s just very personable,” Teresa Hemphill said. “Talks to everybody, knows everybody. We cannot go any place in town. The horns are blowing and it’s ‘Hey Bob!’ ‘Hey Bob!’ everywhere we go. He’s a philosopher, and can talk to you about any- and everything.”

Flavors of Bob and Teresa are plastered throughout the space: A mini glass-stained Texas flag, armadillo and cattle crossing signs, and the Memphis license plate with Elvis memorabilia on it. The intimate space is small enough to greet customers at the front door from the kitchen, yet big enough for intimate conversation – if you’re not too focused on downing your fresh, hot food.

Chicken-N-Mo has been nominated by the Spokane Culinary Arts Guild for Best Southern Style Food, listed as a “Best of the Northwest” eatery, and won KXLY’s Slam Dunk Dish contest. Their Facebook page, where they flaunt a 4.8 restaurant rating, is filled with praise from visitors and Spokane locals alike.

“You need to bring Chicken-n-Mo to Laramie, Wyoming,” Lois Smith commented on a Jan. 26 post. “We have a lot of great local restaurants, no one does chicken like Bob at Chicken-N-Mo!!!”

Visitors include the Harlem Globetrotters, who faithfully eat at the restaurant during their annual Spokane visit. They also cater parties at Gonzaga basketball head coach Mark Few’s house and donate to Gonzaga’s Student Affairs department. Lewis & Clark High School students would flood the restaurant during the lunch hour before they closed the campus.

“So we named the chicken sandwich after them. It’s called the Tiger Patty,” Teresa Hemphill said.

Beyond satisfying hunger, Chicken-N-Mo donates to the LINKS scholarship fund where Teresa holds a 20-year membership. They also donate to EWU’s Africana Studies program, providing free Tiger Patties to some of their events.

“We always did donations to all kinds of community organizations, especially the student affairs and a lot of gift certificates.” Teresa Hemphill said.

Bob Hemphill also helps other restaurants. He gave advice and a listening ear to Michael Brown, who opened his East Central restaurant Fresh Soul in 2018.

Ed Richardson, a security guard at the Knitting Factory, is a Chicago native and grew up eating the world famous Harold’s Chicken. He called Chicken-N-Mo a close second, and one of his favorite spots of all time, ordering their two-piece dark meal or three ribs combo meal three times a week.

Richardson is close with Bob Hemphill’s sons. Teresa Hemphill, everyone’s honorary grandma, is also close with Richardson’s daughter, who attends Fisk University. After Richardson came to order before work, he teased the Hemphills about their matching Chicken-N-Mo anniversary shirts. He then took pictures of them, as if they were his kids on their first day of kindergarten.

“You notice that every customer comes in and loves on Bob, and they’re so friendly,” Richardson said. “Everyone is family here, and they’re so easy to talk to and have a conversation.”

Nearing 80, Bob knows it’ll take a miracle for him to be here for the next 30 years, but he hopes those who carry the Chicken-N-Mo legacy understand the ingredients that started it.

“You can’t operate without a clear vision,” he said. “You can’t do anything without a picture of what you want down the road. We expected all of this to happen, and when we did that, that’s probably why we’re here today.”