Tom Sherry credits his longevity in the broadcast news business to the traits he shared with a former on-air partner.

“I like people,” Sherry, the 62-year-old weather forecaster and anchorman at KREM-TV, said from his studio home of more than three decades this week. “I had a golden retriever dog for a long time, Doppler the weather dog, and really I think my personality is the same as his. I just really like people.”

Spokane has liked Sherry for decades, embracing him with awards, donations to an annual Thanksgiving turkey drives and cheering crowds at live broadcasts during high school football games. At 6 p.m. Friday, Sherry will appear on his last regular broadcast at the CBS affiliate, though he’s vowed to return for guest appearances and to help usher along his established philanthropic efforts.

Sherry, who grew up in Southern California as a CB radio enthusiast, came to TV from radio. He was the drive-time talent and program director at KDRK when he took the weekend weather job at KREM. He credited the man he would ultimately replace, Peter Colford, for preparing him to appear on camera when Colford was out due to colon cancer treatment.

“Well, if I was sitting in Peter’s chair, then everybody at home knew Peter was not having a good day.”

It was an unenviable position, said the newscast’s two co-anchors, Charles Rowe and Nadine Woodward. But Sherry’s likability and distinct personality won viewers over after he took the position following Colford’s death, they said.

“Tom became his own person,” said Woodward, now mayor of Spokane. “He was comfortable in his own skin.”

“Tom is a terrific talent,” said Rowe, who came to KREM after stints in Los Angeles and Chicago, among other markets. “If he would have become a game show host, like Pat Sajak, he could have made a fortune.”

Sherry said he was influenced by the radio disc jockeys he grew up listening to in California, in particular the “boss radio” format that proliferated in the 1960s. He said the format drove him to think in “bits,” like when he went to Los Angeles for the Grammy Awards in 1995 and shot a promo in which hotel concierges, limo drivers and more pretended to recognize him from a cowpoke jingle on the back of a pony in Spokane. 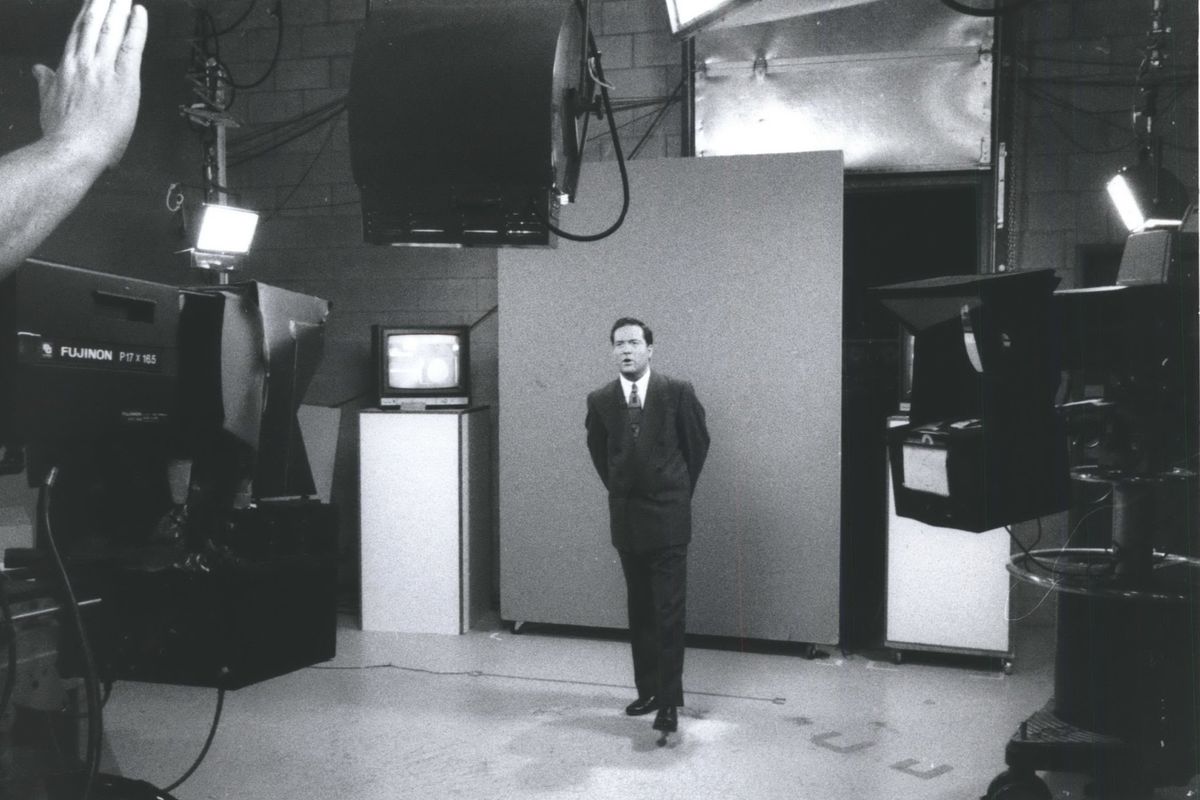 Tom Sherry of KREM-2 in a 1992 photo. (The Spokesman-Review photo archive)

“Tom was always self-deprecating, always willing to make fun of himself,” Woodward said. “Those were the biggest laughs we got on the air.”

Sherry remembered one time leaning over to Rowe, before the cameras came on for a news broadcast.

“I said, ‘You know, I used to watch you in high school,’ and he just looked at me,” Sherry said, putting on a stone face. “And now I know what that’s like.”

Whitney Ward, who’s appeared on the evening newscasts with Sherry on KREM for the past two-plus years, said Sherry could also seriously report the news when needed. The two were thrown together on air for live coverage of the shooting at Freeman High School in September 2017, and Ward credited Sherry for being a calming voice during a newscast when many basic details were still unknown.

“He’s so smart, and well-versed about the issues in this community,” Ward said. “And that’s when I think, maybe for the first time, that he’s more than just the guy who does the weather.”

Mark Hanrahan started anchoring with Sherry and Jane McCarthy in 2015, taking the place of a longtime and well-liked anchor in Randy Shaw. Hanrahan took Shaw out to dinner, he said, and the journalism veteran offered Hanrahan this nugget of advice.

“He said, ‘Don’t worry about it, you’re working alongside the most beloved weatherman in the history of the Inland Northwest,’ ” Hanrahan said. “I didn’t know how true that was at the time.”

For years, he’d also been working outside the newsroom. That included working with Laura Papetti at KREM to help develop Tom’s Turkey Drive, the annual charitable partnership with Second Harvest that now provides 11,000 Thanksgiving meals each year.

“He could have called it in for the last two decades,” said Papetti, who in addition to appearing on-air also serves as their community marketing director. “And he didn’t. He chose not to.”

Sherry credited local businesses, including Rosauers, Darigold and Franz bakery, with picking up the idea of feeding families at the holidays.

“Along the way, it just took off like magic,” Sherry said. “It was unbelievable.”

Sherry also made road trips in the fall, bringing “Tom’s Tailgate” to local high schools. In the van for drives to far-flung high schools, was longtime production assistant Charlie Laborte.

“Our show ended at 7,” Laborte said. “He’d still be there for another 20 minutes, just talking to people.

“If a woman comes by with her son, we have a three-hour drive back home, but he’d say, let’s enjoy the moment.”

Sherry, who took a leave of absence in November to receive treatment for prostate cancer, said the distance from fans imposed by pandemic precautions led him to mull retirement, even in the middle of a two-year contract. He made his decision last year, he said, before undergoing the cancer treatment, which did not require chemotherapy or surgery and is not the reason he’s walking away from daily TV news, he said.

“That was a dark time for a lot of people,” Sherry said of the early days of the pandemic, when anchors were being asked to work from home. “So we tried to bring some levity.”

That included bits at home with his new wife, where they’d hide a wine glass in the background of the scene that would slowly drain during the news hour. Or a bit about the weather that included the novel idea of looking out the window.

“I’d walk over and I’d look outside and say, ‘It’s a beautiful day.’ I’d tell people, ‘You may have one of these at your house.’ ”

But the pandemic restrictions kept Sherry away from the people in the newsroom and on the streets, including during the turkey drives. It weighed on Sherry, he said, and he also thought about the next generation of talent. Jeremy Lagoo, who’s been reporting the weather on KREM’s morning show for a year and a half, will take over the 4 p.m. to 11 p.m. weekday newscasts, and Thomas Patrick, who’s delivered the nightside weather, will join the morning show.

“I think for people my age – again, I’m pretty young – but I think if you are, it’s a good idea to step aside so that someone who’s younger can get into a good-paying job, you know, and raise their family,” Sherry said.

He praised the next generation of talent at KREM, including Ward, Hanrahan and Lagoo. While he’s bought a home in Arizona, closer to family, Sherry will spend most of the year here, he said.

“I just think that this is a friendly place, where if you make eye contact with somebody on the street, they’ll say hi to you, they’ll acknowledge you,” Sherry said. “I’m not sure that happens in other parts of the country.”