The final day of the State 1A/2B/1A track and field championships at Roos Field on the campus of Eastern Washington University on Saturday saw ample breaks in the clouds and a couple of meet and state records fall, a nationally recognized athlete win for the last time as a high schooler, and a Division I basketball player dominate in her “second sport.”

Those efforts were led by the St. George’s girls team, which scored 113 points to run away with the State 2B title.

In 1A, Freeman’s boys placed third with 41.5 points behind champion Connell (59) and Lynden Christian (41.5) and Lakeside was fifth with 38.5 points. Deer Park’s girls finished fourth with 38 points as King’s took the team title with 51 points.

Davenport (55 points) finished second in boys 2B behind Rainier (67 points) and its University of Texas-bound thrower Jeremiah Nubbe. Chewelah placed third with 46 points.

In the 1B boys ranks, St. John-Endicott/LaCrosse tied with Garfield-Palouse with 33 points in seventh place. Odessa (57), Oakesdale (49) and Wilbur-Creston-Keller (39) finished fourth through sixth among girls. 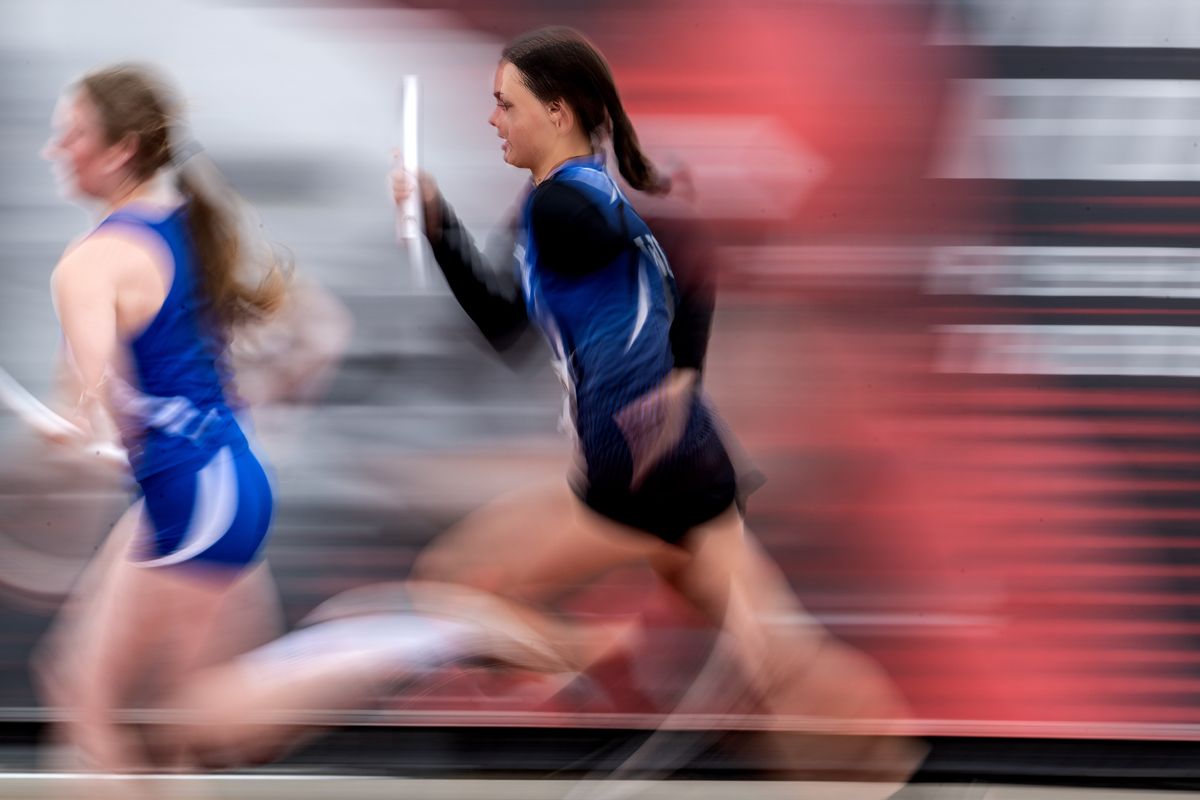 Wilbur Creston’s Kaidyn Maioho , on right, runs the third leg of the Girls 1B 4X100 Meter Relay during the WIAA State 1A, 1B and 2B Track and Field Championships, Saturday, May 28, 2022, at EWU’s Roos Field in Cheney. Wilbur Creston placed 2nd in the race. (COLIN MULVANY/THE SPOKESMAN-REVIEW)

The St. George’s girls won all three relays – and they weren’t particularly close. In the 4x400 race, the Dragons won by 6 seconds, matching the number of consecutive times they’ve won state in the event.

The 4x400 team was made up of Georgia Steele, Maggie McLaughlin, Savvy Briceno and Josie McLaughlin.

Senior Maggie McLaughlin took the lead during the second leg and the Dragons did nothing but extend the lead though the final three legs.

“It’s an amazing relief,” McLaughlin said. “We’ve all worked so hard and we just wanted to make our coaches happy and proud cause they’ve been there for us all along the way.”

“We love Maggie,” St. George’s coach T.J. Moulton said. “She stresses us out. But she runs so hard in everything she does. She’s always someone we can count on to just run as hard as Maggie can run. Can’t ask anything more than that.”

McLaughlin was a freshman when St. George’s broke the record of five consecutive wins in the 4x400.

“To make it six consecutive now as a senior it’s just so fulfilling,” she said.

“I’ve been working hard the past couple of years putting in the work and getting ready for college and now it just feels awesome.”

Moulton said he was “stressed” all week in preparation, and had some finagling to do with his roster.

But he was so confident that he had a backup run in prelims in order to conserve some energy.

“Savvy ran the third leg for us today. She had a tough final day,” he said. “She had to anchor our 4x200 and then had to do the 400 and 300 hurdles double back-to-back. That’s tough. So we wanted to make the prelims today easy as we could for her.”

McLaughlin took as much pride in the team title as any individual award.

“It feels great to finally have that team championship title for the girls,” she said.

“We’ve been really close through the years, including cross country, so finally getting that I just feel very fulfilled.”

Moulton looks to reload and defend the title next year.

“That’s the goal,” he said. “We’ve got a lot of talent. We have a lot of young athletes coming up it’s our goal every year to win it.

“That’s kind of been our thing to start the year every season with. Winning the relays is our goal and the rest of the team branches off of that.”

Rainier’s Nubbe broke the 2B meet and overall state meet record in the discus with a throw of 203 feet, 7 inches, breaking the previous meet mark by 18 feet.

He won the event by 50 feet over the second-place competitor.

“The pushing part is definitely hard sometimes,” he said. “It’s hard to be really competitive and get hyped up in a meet when there’s no one really near you. So I do have to think about what those guys have thrown in the nation so that I can continue to push myself even though maybe the environment isn’t as competitive.”

Raymond’s Kyra Gardner, who is heading to Washington State next year to play basketball, won the girls 2B high jump and long jump Saturday, adding to her victory in the triple jump on Thursday.

She was happy to participate in a big track meet with all the atmosphere one last time in high school.

“It feels amazing,” she said. “I get to be around a ton of nice people, get to compete against a lot of really tough competitors. It’s feels nice to be back.”

She said high jump is her favorite event in track.

She’s ready to make the Palouse her home for a while after visiting this weekend.

Pomeroy’s Colton Slaybaugh broke the meet record in the 1B pole vault at 14-1.

“It’s been a lot of years in preparation,” he said. “I’ve had a couple years taken away from me by COVID and everything so it feels good to be back and take care of business.”

Slaybaugh said the meet record was always in his sights.