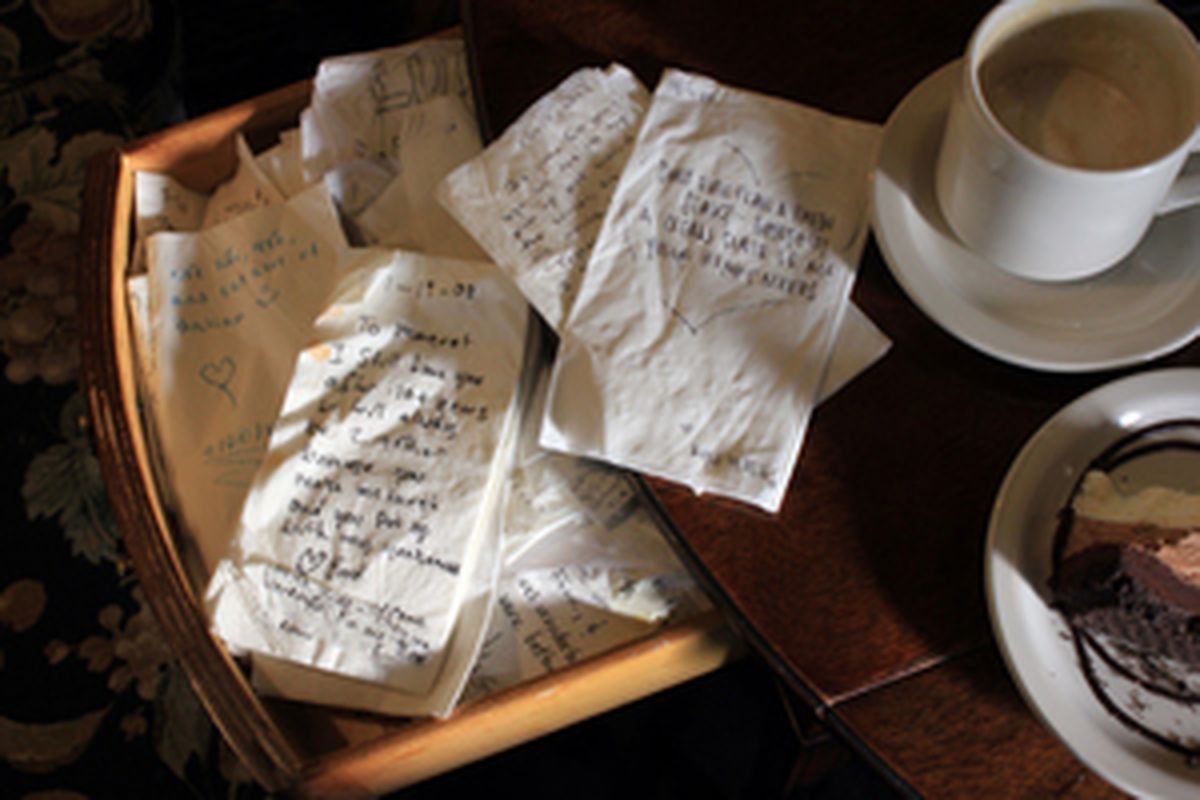 Love letters abound in the bar at Europa

In the restaurant’s bar, handwritten love letters – many of them scrawled on napkins – are tucked into top drawers of coffee and end tables. Customers are welcome to read them – and add their own.

“You see it a lot in the evening hours,” owner Aja Engels told The Spokesman-Review in 2014. “People come in for coffee and they’re cuddled up on the couch, looking through the letters. It’s sweet.”

She isn’t sure just exactly how the tradition started, but is happy to have inherited it. She and her husband, executive chef Jeff Engels, bought the restaurant in 2013.

Europa opened in 1982 and the bar was added in a 1994 remodel. It’s believed the love letters started appearing a short time after that. They’re signed with Xs and Os and lipstick kiss impressions and have been inspiring sweethearts to leave their own notes for more than 20 years. 125 Wall St. (509) 455-4051.

When it comes to romantic dining, ambiance and hospitality are as important as the menu.

Often, romantic restaurants are special occasion places, classy and lavish – not the kind of spots you go to grab some quick grub but the kind where sweethearts can take their time, lingering over multicourse menus and maybe just one more glass of bubbly.

Here are a few Spokane-area favorites. Reservations are recommended.

A favorite starter is the $14 charred octopus with Spanish chorizo, roasted red peppers, potatoes, chili oil and a balsamic reduction. Popular sides include wild mushrooms and Brussels sprouts with chili oil and pancetta as well as the house-made buttermilk spaetzle mac-and-cheese with extra sharp cheddar, both for $8.50 each. Mains include the $28 half chicken with those Brussels sprouts as well as the $30 cassoulet with Andouille sausage, braised pork cheeks, duck leg confit, braised white beans, greens and duck fat bread crumbs.

For weekend brunch, this small Italian eatery in Browne’s Addition is bright and airy. But lights are dimmed for dinner service, turning it into a cozy and intimate place to experience the warmth of Italy. The menu features elegant and contemporary Italian cuisine as well as modern takes on traditional fare from both northern and southern Italy. From the bar come quality craft cocktails, often made with Italian liqueurs.

Start with classic Prosciutto di Parma with fig jam, mozzarella, basil and balsamic syrup. Or, opt for the charred octopus with spicy tomato oil, potatoes and lemon-parsley salad. Mains include goat cheese ravioli with arugula-basil cream and walnuts, squid ink fettuccine with spicy wild shrimp, and wild boar with cavatelli pasta, red wine and tomatoes. On the side, there are two options: spaghetti with olive oil and Parmesan, or caramelized Brussels sprouts with crispy pancetta, honey and Madeira.

Owners Anna Vogel and Bethe Bowman opened Italia in 2010. Both had previously worked for celebrity chef Tom Douglas in Seattle. Vogel, who grew up in Switzerland, worked in restaurants in Sydney, New York City and Boston, before moving to the Northwest to become Douglas’ corporate chef for about nine years. Bowman also worked for Douglas, then managed the front of the house at Luna before she and Vogel bought their restaurant. 144 S. Cannon St. (509) 459-6000. Reservations can be made online at www.italiatrattoriaspokane.com.

With its extensive wine list and elevated Pacific Northwest- and Mediterranean-inspired cuisine, this South Hill restaurant is a longtime fine-dining favorite. Opened in 1992 by restaurateurs William and Marcia Bond, Luna is now owned and managed by husband-and-wife Aaron DeLis and Hannah Heber, who share the Bonds’ passion for fresh, seasonal ingredients and scratch-made fare.

The $17 ahi tuna tartare – with avocado, tomato, red onion and wasabi vinaigrette – is a popular appetizer. Look also for sauteed Brussels sprouts with apple, pancetta and potato puree for $12. Mains include citrus-cured salmon with spinach, golden raisins, pancetta chives and hollandaise, as well as the duck breast with fennel puree, leeks, Yukon gold potatoes, butternut squash and pear-fennel salad, both for $30 each. For dessert, consider coconut cake with coconut cream, lemon curd and vanilla gelato or salted devil’s chocolate cake with candied hazelnuts, both for $9 each. 5620 S. Perry St. (509) 448-2383. www.lunaspokane.com.

Classic French fare and flair combine with contemporary American character and cuisine at this elegant downtown bistro, where the ceilings are high, the feel is sophisticated yet welcoming, and the menu is (mostly) meaty.

Start with a $17 charcuterie board with three types of house-cured meats or the $20 plate of foie gras. Then move onto a main – beef, bird, fish, pork – for $29 on up to market price. (There are tofu and lentil entrees, too.) For dessert, consider $8 crème brûlée or a little fromage for $10.

Sante opened in 2008 and is owned by husband-and-wife restaurateurs Jeremy and Kate Hansen. It recently underwent a light renovation, including new kitchen flooring and a fresh coat of paint. 404 W. Main Ave. (509) 315-4613. santespokane.com.

This destination restaurant offers classic French cuisine in hilltop residential setting, overlooking a golf course. The feel is refined yet friendly, sophisticated yet casual. The fare is upscale French bistro with northern Italian influences. The chef’s family comes from Italy’s Piedmont region, but he and his wife are French.

Fleur de Sel is owned and operated by the husband-and-wife team of Laurent and Patricia Zirotti, who met at hotel management school on the French Riviera and worked in the hospitality industry there before moving to Billings in 1998, to run Enzo Mediterranean Bistro. Ten years later, they opened Fleur de Sel.

Start with $7 pork pâté, $10 escargots in puff pastry or $8 French onion soup the way the chef’s mother made it. Entrees include Parisian gnocchi with prawns for $24 and smoked pork tenderloin with Brussels sprouts compote with bacon jam for $19. “Les Classiques” menu offers more: French grilled cheese with or without an egg – Croque Monsieur for $14, Croque Madame for $15 – as well as steak frites for $27, duck confit for $23 and lamb cheek stew for $20.

Don’t skip dessert. The decadent $9 chocolate tart, topped with caramel sauce and fleur de sel, features Belgian chocolate ganache. Or, on the smaller side, there are two French macarons and chocolate caramel for $5. 4365 E. Iverness Drive in Post Falls. (208) 777-7600. fleur-de-sel.weebly.com.

The refined dining room of this downtown steakhouse, reminiscent of those you might find in New York City, specializes in what the name suggests.

The dining room – modern, sophisticated – is done in warm tones with plenty of wood as well as stone accents. Expect table linens and cushy chairs as well as bench seating and, for larger groups, booths.

The feel is a little more casual in the masculine, wood-lined basement lounge, where a professional piano player adds to the ambiance every night of the week beginning at 6 p.m. or, Sundays, at 5 p.m. 165 S. Post St. (509) 474-9888. churchillssteakhouse.com.

Set in the hall outside the restaurant, Masselow’s Lounge features low-slung armchairs set around a modern fire feature. The feel is contemporary, open and elegant. Start here with a craft cocktail or a selection from the establishment’s extensive wine list before heading inside the intimate, dimly lighted dining room.

Appetizers include smoked escargots and ahi tuna tartare, both $11 each, and a $15 cheese plate with honeycomb from Green Bluff. Steaks run from $38 for a 12-ounce New York to $110 for a 40-ounce porterhouse meant for two. Sauces – bearnaise, peppercorn demi-glace, bacon-Gorgonzola, horseradish aoili, house steak – are another $3 each or three for $6. Additions include a giant prawn for $5 to a lobster tail at market price.

Also on the menu: pork and lamb chops, a half or whole chicken, Chilean sea bass and wild salmon. There are also sides for sharing such as the $12 prosciutto asparagus, $10 truffled corn pudding and loaded $8 baked potato. Northern Quest Resort and Casino, 100 N. Hayford Road in Airway Heights. (509) 481-6020. masselows.com.

Beverly’s at the Coeur d’Alene Resort – Beverly’s boasts one of the region’s most extensive wine collections as well as spectacular lake views from the restaurant’s seventh-floor perch. Arrive early this time of year to watch the sun set over Lake Coeur d’Alene and the resort’s marina.

Palm Court Grill and Peacock Room Lounge – Dine in the gilded atrium that doubles as the hotel lobby at the ornate Historic Davenport Hotel in the heart of downtown. Tables are cordoned off from those coming and going or lingering by the fountain, and plush, high-back chairs help lend a sense of privacy. The Palm Court Grill features classic and hearty American fare – ribeye, prime rib, halibut, salmon with Champagne-huckleberry sauce – with a side of Spokane history. Built in 1914 by acclaimed architect Kirtland Cutter, the hotel sat empty for 15 years before Walt and Karen Worthy began their multimillion-dollar renovation, restoring the Davenport to grandeur and reopening it in 2002. Start or end in the Peacock Room Lounge with its signature Cougar Gold Cheese Dip or array or martinis. 10 S. Post St. (509) 789-6848. www.davenporthotelcollection.com.

Appetizers run from $13 for country-fried calamari to $32 for a sampler platter with coconut prawns, roasted crab and artichoke dip, and grilled teriyaki tenderloins. Steaks run from $31 to $48. Surf-and-turf dinner combos are $40 to $56. There’s seafood and pasta, too. Specialty martinis include the Three Berry and Lavender cosmos, $10 each. 621 W. Mallon St. (509) 328-5965. clinkerdagger.com.