A GRIP ON SPORTS • The rest of this month will be dominated by three things: Christmas shopping, college football bowl games and NFL playoff chases. For time management reasons, we will express our thanks those of us who live in the Northwest don’t have to worry about that last one.

• This weekend, however, has its own set of issues related to time. Take tonight, for instance. Anyone wanting to watch the three college events that touch our area is out of luck, as all three – Eastern Washington at Montana in the FCS football playoffs, Oregon vs. Utah in Las Vegas for the Pac-12 football title and Gonzaga hosting Wyoming in women’s play – are being played at approximately the same time. 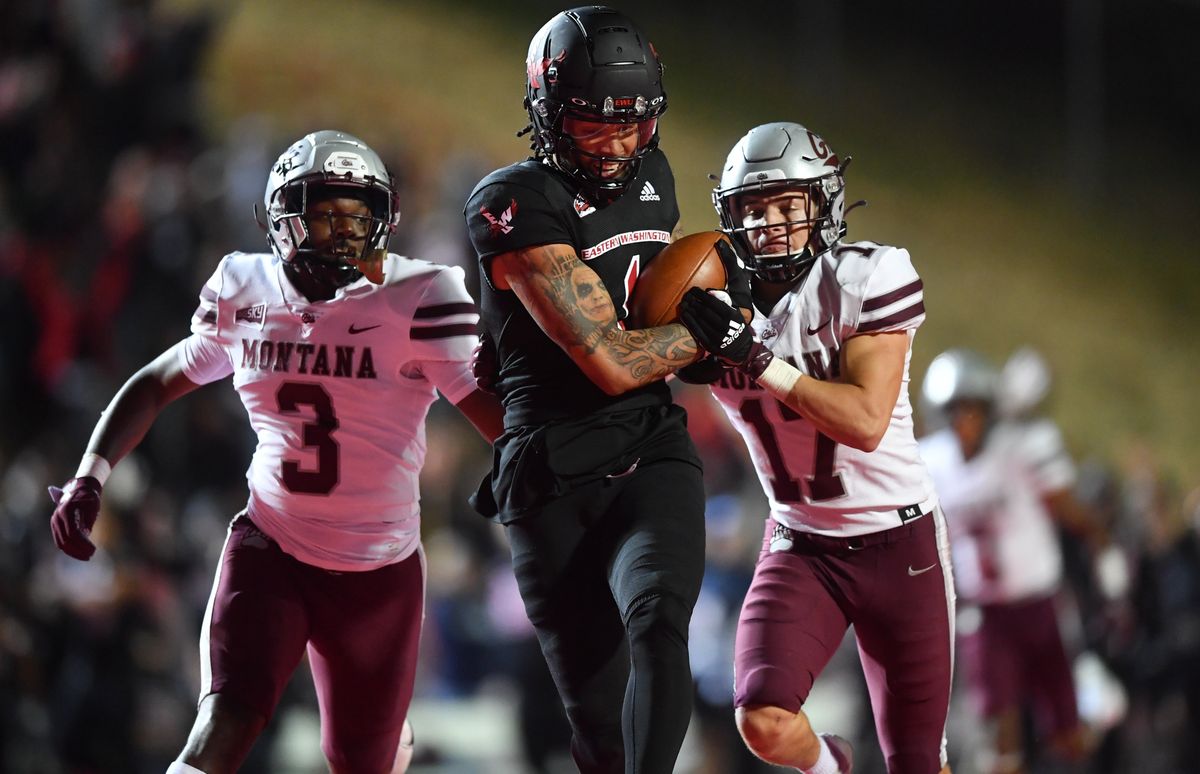 Yes sir, the 6 p.m. hour is going to be crowded even if you eat your dinner in front of the TV. That’s where the Pac-12 title game is best consumed (5 p.m. start on ABC) but the other two are harder to watch. The Eagles are ESPN+, a streaming service, while there isn’t even a local broadcast of the GU women, according to our On The Air listing.

As per usual, Saturday will be swamped with college football and basketball. The best of the latter includes a Wisconsin interconference rivalry (Marquette at Wisconsin, 9:30 a.m. on Fox) and Washington State hosting USC in a Pac-12 matchup (3 p.m., Pac-12 Network). And there is the Zags’ Battle in Seattle, which you can watch starting at 5 p.m. on ESPN2.

The day is pretty much clear, however, for the football title games around the nation. Baylor and Oklahoma State kick it off on ABC at 9 a.m. with the Bog 12 title on the line. It ends with Michigan and Iowa meeting for the Big Ten title at 5 p.m. on Fox. But, as they used to say on TV, there is more. The California/USC game, postponed due to COVID-19 issues a few weeks ago, starts at 8 p.m. on FS1.

We will find out the playoff participants Sunday morning, as ESPN hosts that part of the day’s festivities starting at 9 a.m. Places like Washington State will find out their destination in the early afternoon.

Yes, right while the Seahawks are playing. If that matters to you. It certainly doesn’t to others in the NFL, except maybe their opponent, the 49ers. San Francisco is still in the playoff hunt, unlike its rivals from Seattle.

There are some interesting college basketball games on tap, though one of the more relevant to this area, UCLA at Washington, may not go off as planned – noon on the Pac-12 Network – due to COVID-19 issues among the Huskies. We’ll see.

Just like everything else on tap for this weekend. 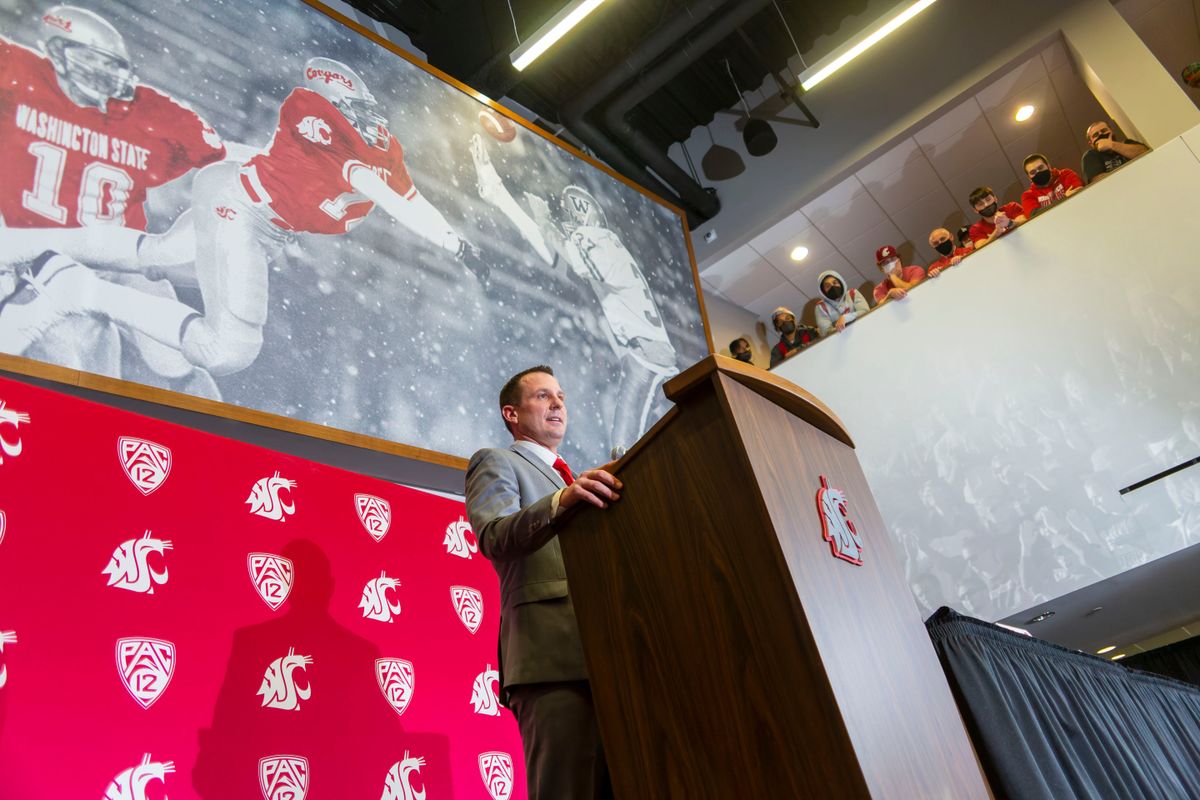 • It’s officially official. Jake Dickert, and his family, is officially part of the Cougar collective. His introductory press conference – you know, the one thing athletic directors feel they have to win when hiring a new college football coach – was held yesterday in Pullman. Everyone was there. Except us.

It had a similar feel to the second WSU hiring press conference I attended. (The first was for Len Stevens, replacing George Raveling as basketball coach, and it was held at the Spokane airport as Len and sports information director Rod Commons headed to Seattle.) The personal story Paul Wulff presented that December day in 2007 was similar to Dickert’s, though Wulff had the extra-added attraction of being a Cougar alum. 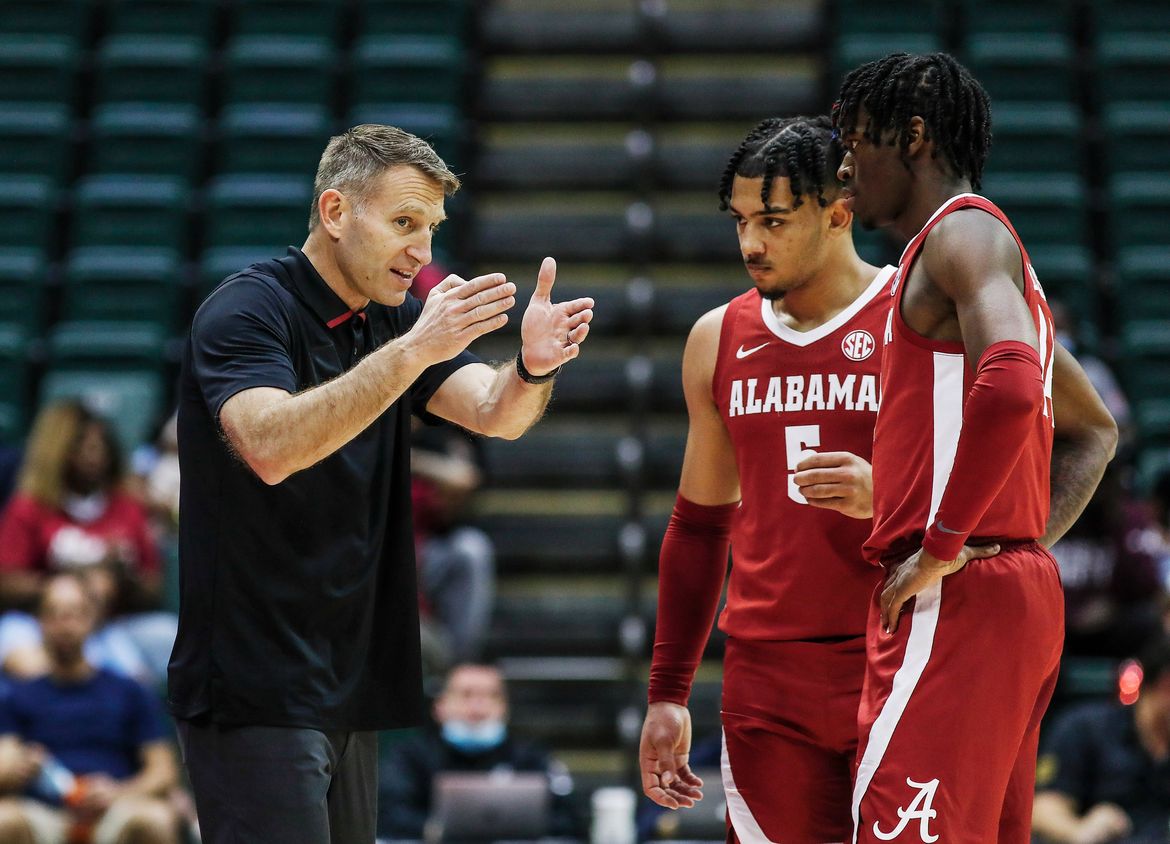 Gonzaga: Why now? Why bring back the Battle in Seattle this season? Theo Lawson has an answer to that question, though it’s not exceptionally analytical. … What will Alabama bring to Key Arena tomorrow night? Jim Meehan has that answer as well. … The women host struggling Wyoming tonight. Jim Allen has a preview. … Speaking of preview, Larry Weir’s guest on the latest Press Box podcast, Steven Karr, has one of Saturday’s Seattle game. … Around the WCC, if you saw the end of Saint Mary’s win at Utah State last night, you saw two things: The Gaels getting the benefit of an iffy whistle and Randy Bennett acting like a donkey as he left the court. … The Santa Clara women will go for their second consecutive College Cup title and they’ll do it in Santa Clara. BYU gives the WCC two teams playing for the NCAA’s soccer crown, though the rivals meet in the semifinals tonight. … BYU hoops is in a funk. 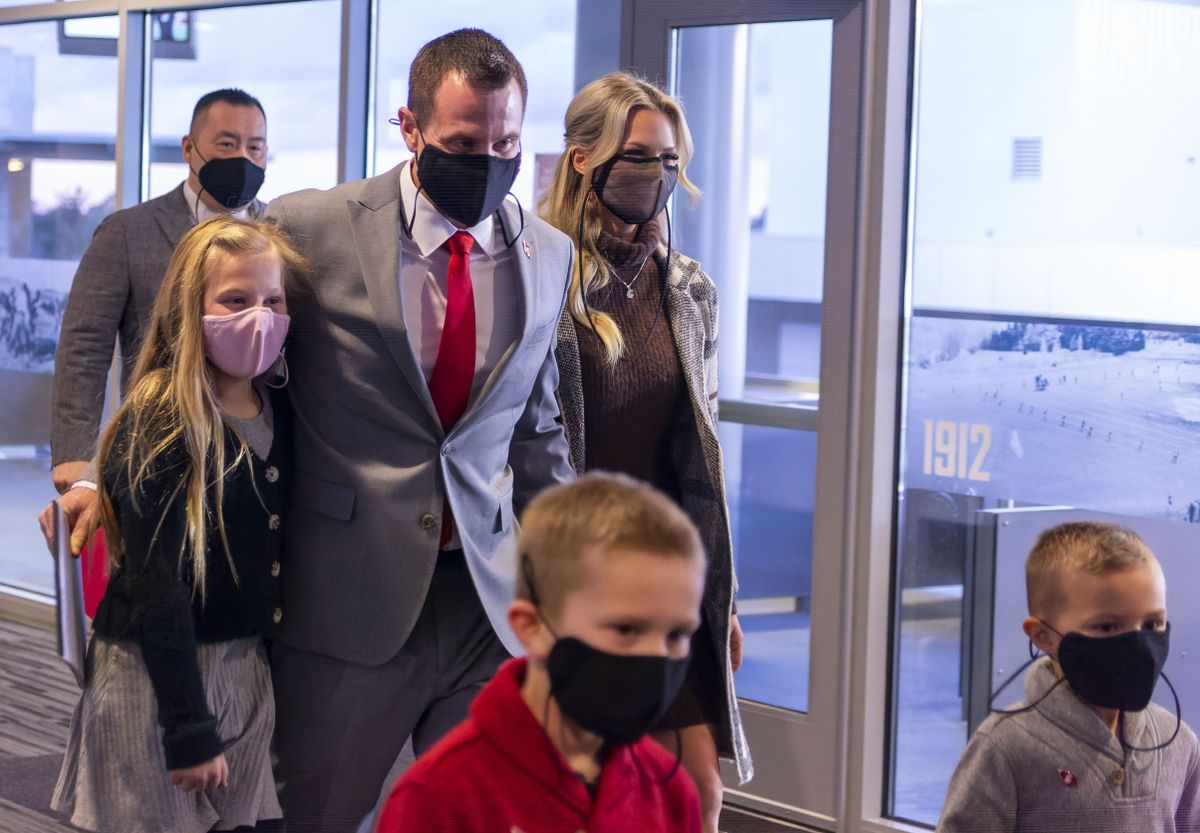 WSU: John Blanchette was in Pullman yesterday and he has his thoughts on Dickert’s coronation – and future. John is high on it. … Dave Nichols filled in for Colton Clark and has the latest staff news, including the unofficial (for now) hiring of a defensive coordinator. … Dave also has this coverage of the volleyball team’s NCAA-opening win over Northern Colorado and the women winning a nonconference basketball game 72-58 over visiting USF. … The Arizona Cardinals have a great safety tandem. One is a Husky, the other a Cougar. … Elsewhere in the Pac-12 and college football, Jon Wilner delves into tonight’s championship football game. He picks Oregon. … So do Duck fans. But Utah had the advantage the last time these two teams met and the Utes feel they still have it at the line of scrimmage. Oregon counters with skill players. … The Lincoln Riley hire is still reverberating through the USC campus and among the high school campuses in Southern California. All the while, the Trojans try to prepare for California. … Arizona State quarterback Jayden Daniels is coming back for another season. … Oregon State is still revamping its stadium. … Arizona seems to have turned the corner on recruiting. … In basketball news, we wondered if Oregon State was better than its record. Nope. Not after opening conference play with a loss to California. … Colorado has a short turnaround after the UCLA loss. … Arizona may not be able to find a spot for the postponed Washington game. … Utah is hurting. … Finally, the future is cloudy at Stanford. 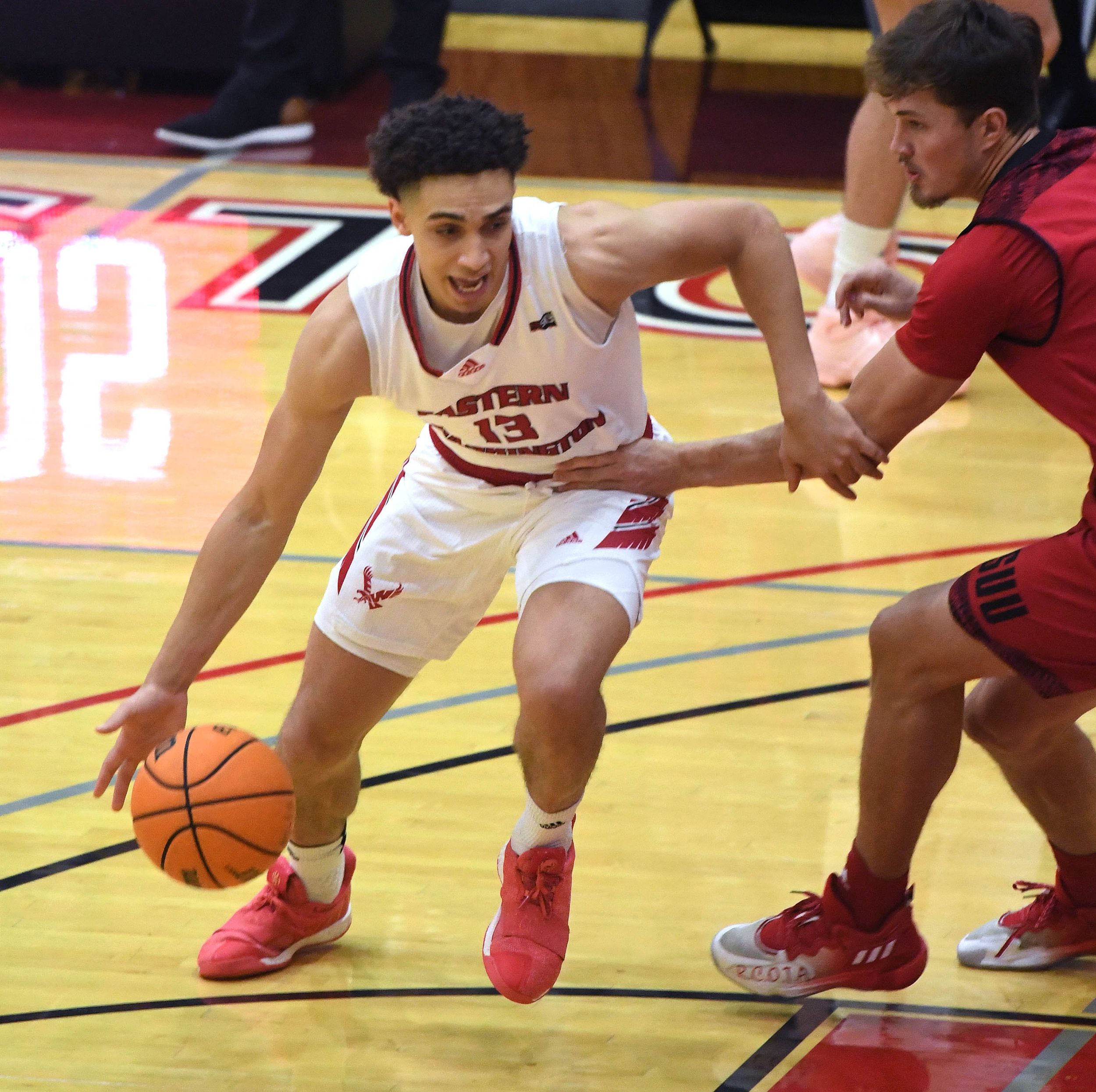 EWU: The Eagles opened the conference schedule Thursday night, falling to visiting Southern Utah 89-76 in Cheney. Dan Thompson was there and has this game story while Colin Mulvany also has a photo gallery. … Dan also has a preview of tonight’s showdown in Missoula as well as three things to watch. … Around the Big Sky, Montana is ready and Washington-Grizzly Stadium will be rocking. … Get this. Montana State has an FCS playoff game tomorrow at home. The Bobcats will have a new starting quarterback. This year’s put his name in the transfer portal yesterday, two days before the game. … In conference basketball play last night, Portland State topped Idaho State, Montana got past Sacramento State, Northern Colorado defeated Montana State in overtime and Weber State rolled over Northern Arizona.

Preps: Almira/Coulee-Hartline returns to the State 1B football championship game Saturday. And another Isaac, Dane, will be at quarterback. Dave Nichols has this story. … Dave also has a basketball roundup from Thursday night.

Seahawks: Where does Russell Wilson rank these days in the NFC West? Fourth? He has won just once since his good friend and mentor died. … How will Seattle use Adrian Peterson? … The failed onside kick last week was a gut punch.

Mariners: Baseball is risking a huge loss with the work stoppage.

Sounders: As everyone who watched them knew, Seattle had some of the MLS’ best players this season.

• Someone asked me for pictures of the puppy on social media. I will not be sharing. I don’t trust those of you who follow me on Twitter to be able to resist Donut’s cuteness. I can’t resist those sad-look eyes, even when he’s chewing up a shoe. How could anyone? Until later …