Hammersley Inlet, WASH. – Walking onto a beach recently exposed by a receding sea, Eric Sparkman paused and looked at an expanse of sun-baked shells.

“Oh, here we go,” he said, bending down and prying apart a Manila clam and revealing an empty interior picked clean by scavengers. “Here is some death.”

Documenting that death was the mission Friday, as Sparkman and Rana Brown, both biologists with the Squaxin Island Tribe toured Hammersley Inlet and Oakland Bay southwest of Seattle studying how three straight 100-degree days in late June impacted shellfish in the Puget Sound.

“He’s alive, but is he dying?” Sparkman said later while examining a moon snail. “I don’t know.”

That’s the question biologists and managers are asking up and down the Puget Sound and the Salish Sea following a record-breaking heat wave that coincided with some of the lowest tides of the year.

Yes, it was bad for shellfish.

Some early modeling done by a Canadian biologist suggests more than a billion sea creatures – including moneymaking clams, geoducks and oysters – died along the Salish Sea’s 4,000 miles of coastline. But experts in Washington State urge caution when tossing numbers about, noting that conditions – and thus, mortality – vary tremendously from bay to bay and beach to beach.

“We have no idea what the numbers are,” Brown said. “It’s kind of a scary thing. You don’t know what impact it’s going to continue to have.”

That variability was clear Friday.

On one beach Sparkman recorded mortality rates around 40% for oysters. Meanwhile nearly 50% of clams on another beach died. However, just a mile or less away, other beaches had minimal death. Overall, Sparkman was surprised by how many creatures died. 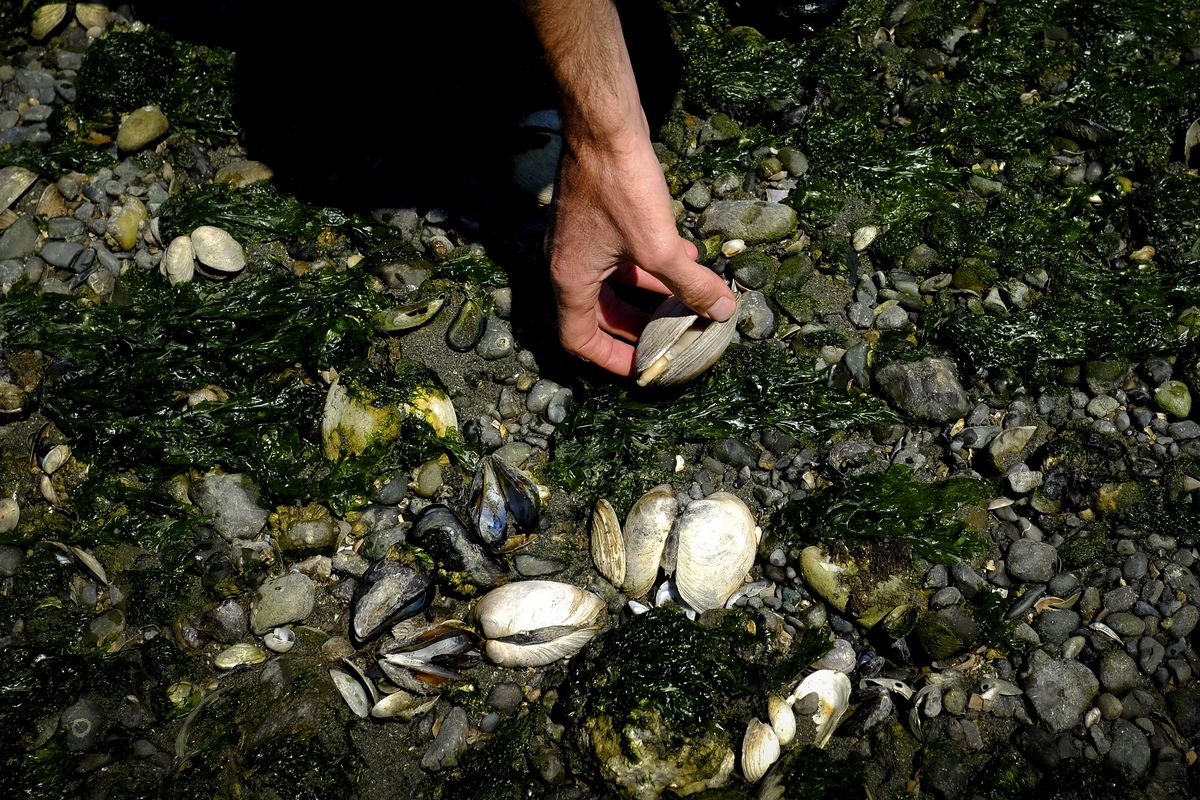 “Here’s some death,” says Eric Sparkman, a Shellfish Biologist with the Squaxin Island Tribe’s Natural Resources Department, as he shows a clam that was cooked to death during an abnormal heatwave on Friday at a beach on Hammersley Inlet near Shelton, Wash. (Tyler Tjomsland/The Spokesman-Review)

Those deaths – if widespread enough – may have ecological impacts as shellfish filter phytoplankton, which contributes to overall water quality. For instance, a large market-sized oyster can filter about 50 gallons of water per day.

And the die offs will likely damage Washington’s $150-million shellfish industry; the largest in the U.S. and one already struggling with unhealthy ocean conditions, a toxin-related die off in 2018 and cutbacks in demand due to the pandemic.

But perhaps more than anything, the heat wave and its impact – both aquatic and terrestrial – highlight the necessity of preparing for climate change, said Nick Bond, an atmospheric scientist at the University of Washington and the state’s climatologist.

“That we could get something of this magnitude is shocking and sobering,” he said, although he noted that the heat wave was “an extremely unusual weather event” made worse by climate change.

Washington’s aquaculture industry started in the mid-1800s and was, for decades, focused on the native Olympia oyster, which lived in the Willapa Bay and South Puget Sound. But, by the 1890s, the Olympia oyster industry had crashed due to over harvest and polluted water.

To revive the business, growers imported Pacific oysters, Manila clams and several other shellfish species from abroad. Now, those nonnatives dominate and are the backbone of an industry that accounts for 25% of the nation’s shellfish production by weight.

Two of the main players in the Washington shellfish game are Taylor Farms and the Hama Hama Company. Both companies reported some losses, although the scale and impact was unclear as of last week, they said.

Compounding the issue, she said, is the fact that there was a shellfish die-off in 2018 and a drop in demand in 2020 as restaurants closed due to the pandemic.

One bright spot, however, is that in June the U.S. Department of Agriculture expanded emergency funding to most aquaculture. That expansion came after severe winter storms in the Gulf of Mexico in February.

All of which leads to a larger point: as the climate changes, so will aquaculture and agriculture.

For shellfish farmers, that may mean growing crops farther down the beach in an effort to limit their exposure to heat during low tides. But that comes at a price, as the deeper the shellfish are, the more easily predated they become.

For about a decade, Dennis and Karen Stewart, who live near Lake Cushman, have hunted or gathered all the protein they eat. That pencils out to about 400 pounds of venison, 50 to 100 pounds of salmon and 40 pounds of halibut a year.

They add oysters and clams to supplement.

On Thursday, the couple went to Eagle Creek beach on the Hood Canal to dig for clams. The heat concerned Stewart, who saw evergreen trees lose many of their needles.

“We didn’t find more than one or two live mussels down there and some dead clams that were right on the surface,” he said.

Luckily, the oysters fared OK and the two collected their daily limit of 18 each.

But events like the heat wave have the Stewarts worrying that their way of life won’t be possible much longer.

Preservation of that resource, and a way of life originating from subsistence hunting and gathering, is the guiding philosophy of the Squaxin Island Tribe’s natural resource department, Sparkman said.

Puget Sound tribes have harvested shellfish, salmon and other ocean foods for thousands of years. While salmon get most of the attention, shellfish are equally important for the Squaxin Island Tribe and others.

Much of Sparkman’s work revolves around documenting how many shellfish are at each of the tribe’s 450 harvest sites, then determining what the tribal allotment is. Sparkman and others survey the beaches yearly, recording how many pounds of shellfish live in per-foot increments and then multiplying that by the beach’s surface area to gather a rough density estimate.

That task is further complicated by the fact that, since 1895, there’s been a patchwork of individuals and companies that own tidelands. No other state allows that.

It’s a dynamic and complicated system, one that’s hard to accurately survey. Plus, unlike other species – salmon, for instance – shellfish research is a low priority, Sparkman said.

So, the idea that a billion shellfish may have died during the heat wave is reasonable, albeit still an estimate, he said.

That’s a point Teri King hopes to emphasize. King is an aquaculture specialist and water quality specialist for Washington Sea Grant, a University of Washington based institute doing research, outreach and education.

“We didn’t know what to expect,” she said. “I think at first everybody thought the absolute worst. And then (we) realized some were spared. But then why were some spared and some not?”

King and others are collecting reports from commercial growers and individuals, hoping to get a better understanding. Last week, the Washington Department of Fish and Wildlife launched an online reporting portal.

“We really won’t know the full scale of any impacts until at least this fall,” said Ben Anderson, a spokesman for the agency.

Still, while surveying yet another beach Friday, it was clear the heat was stressing and killing shellfish.

That got Rana Brown reflecting on the importance of shellfish.

They clean the water. They help sustain a traditional way of life, and they’re a valuable crop.

“They’re providing a huge service for us,” she said. “Hopefully recovery will be swift.”

Tyler Tjomsland contributed to this report.