A GRIP ON SPORTS • It started in these parts yesterday. Now, until the first week of April, every day on the college basketball schedule will be filled with stress, tension and tears. The conference tournaments are underway. The finality of the season is now in plain sight.

• The Washington State women kicked it all off Wednesday in the Pac-12 Tournament. They faced Utah, knowing a loss could submarine their hopes of playing in the NCAA Tournament. 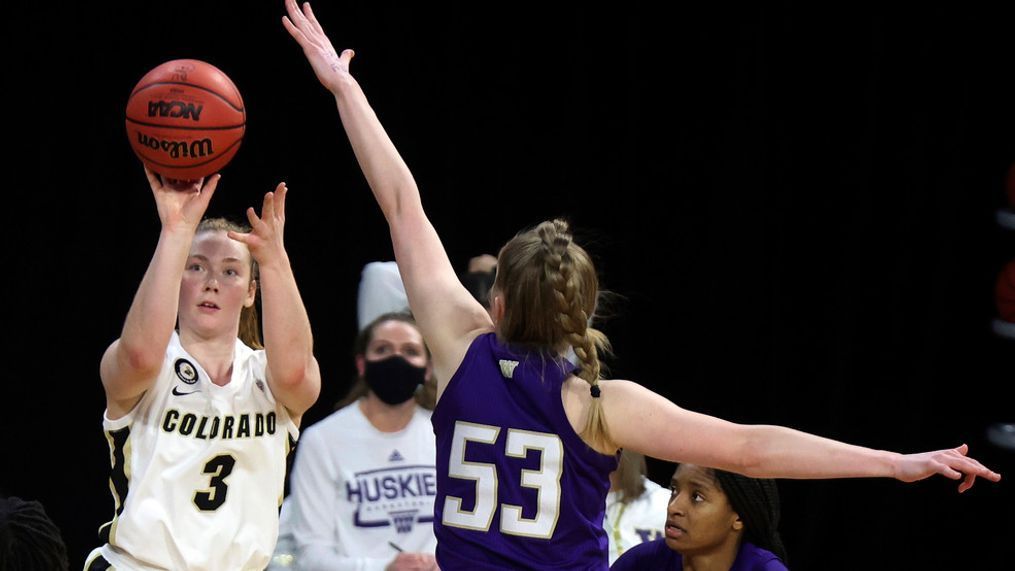 For a while it seemed possible. But the Cougars held on and lived to play another day. Oh, that’s today. Against one of the nation’s best teams, Arizona. Except WSU has already split with the Wildcats, winning a close one at home, losing a close one on the road. A neutral site – Las Vegas –rubber game is on tap (5 p.m. on the Pac-12 Networks).

If the Cougars lose tonight, they still seem a pretty good bet to play on in the NCAAs. But maybe not. This could be the beginning of the end. No one knows until the tournament field is announced.

That’s not the case for most teams that play in conference tournaments. The West Coast Conference’s tourney begins in Las Vegas today. For the teams playing prior to Sunday’s pause, it is sudden death. Lose and the season is over.

That causes tears to flow. Though we’re not sure it will as often this year.

Everything has been strange in this COVID-19-disrupted season. Nothing is normal. So why should the end be business as usual? It won’t. First off, the NCAA decided long ago this season didn’t really occur as far as each player’s eligibility clock is concerned. No one has to leave school if they don’t want. Seniors can return if they so desire. The end, then, isn’t really an end of playing, just another, longer pause.

And everyone is used to pauses. Most have been caused because that swab they stuck up your nose weekly, heck three-times-a-week in some cases, came back positive. This pause will just last a few months if that’s your choice.

The testing? There isn’t an NCAA athlete anywhere that will miss it. It’s invasive. At times it’s painful. And it looms over your days (and nights, as one athlete told me he dreams about it occasionally).

Having it over with may just cushion the blow a little bit concerning the end of the season. It’s just another way a impossible-to-see virus has changed how we look at everything, including college basketball, the past 12 months.

• In the hubbub that was yesterday morning, we ignored another attempt by the powers that be, working to enhance downtown Spokane’s economic future, as they tried knock some sense into our infrastructure.

Specifically, the Downtown Spokane Partnership and the Spokane Sports Commission, among others, took one more shot at convincing the Spokane schools to make the right choice concerning the location of the district’s football field.

If you have read this space at all before, you are aware of where I stand on this issue. Rebuilding Joe Albi Stadium at the same site is a mistake we will be lamenting for the next 50 years. Well, you will. My tombstone won’t – unless I have Kim put something pithy on it.

If I told you one site would be more centrally located, include a chance of adding youth sports fields to the city’s less-then-full inventory, could be used for other activities, would cost the school district less to operate and would not cost taxpayers a dime more to construct, would you want it? Sure you would. 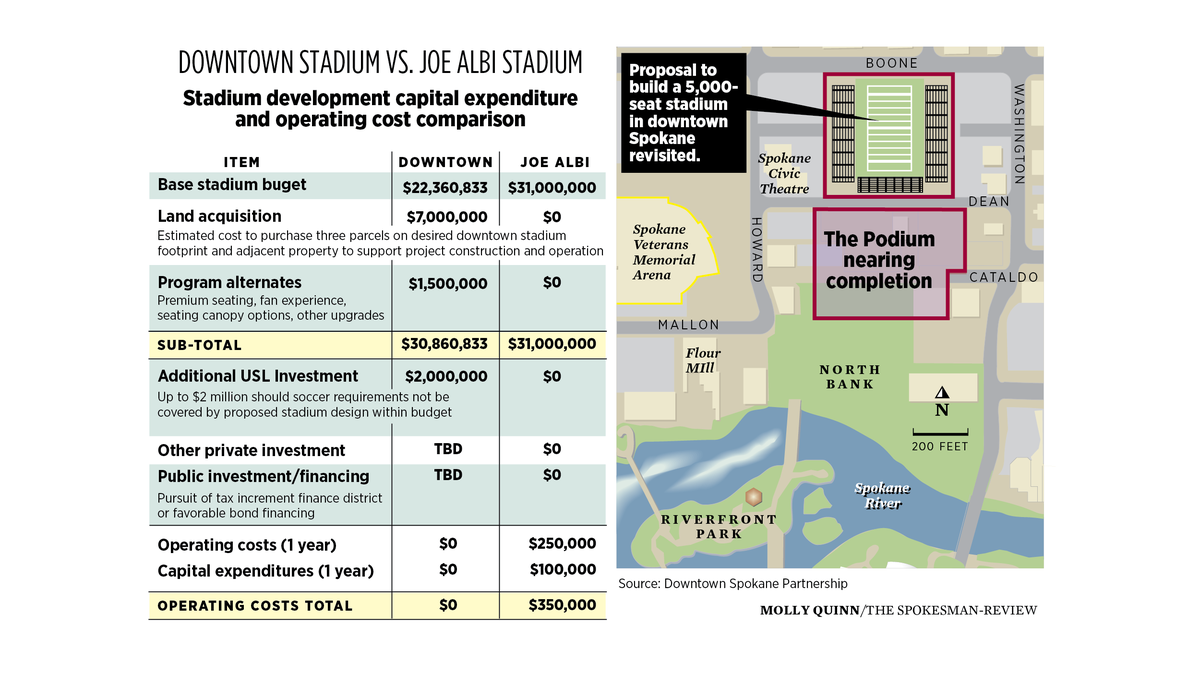 It’s a different choice than it was three years ago, when the Spokane City Council, showing all the spine of a crab, decided not to make a decision about helping improve infrastructure around the proposed stadium near the Arena. Instead it kicked the stadium question to city voters, a different group than those who would ultimately pay the stadium bill.

At the time building (and paying for) a parking structure was involved. It wasn’t needed then and isn’t needed now. In fact, thanks to the reticent of the voters on that advisory ballot, the whole plan has changed for the better. But, you know, “the voters spoke,” even when “they” really didn’t, not on what’s being proposed in 2021.

With the latest proposal capable of saving district taxpayers as much as $17.5 million over the life of the stadium – the PFD and others would pay for upkeep – it once again throws the ball in the school district board’s court.

(Our Jim Allen has covered the changing plans in depth and covers the next steps in this on-going soap opera with this morning’s story.)

Hopefully, the board has said no multiple times because its members had the prescience to see they could get a better deal. That better deal has arrived. Sure, there are questions that would need to be answered. There are details that need to be ironed out. But the bottom line is the location of the stadium, with the Public Facilities District as a partner, makes too much sense to ignore.

If the school district board rejects this plan without a thorough examination and cost analysis, it is not being a true steward of the taxpayers’ money. The downtown site, even if the cost were the same, would still be a better site in that it is more centrally located for the district’s patrons. If it actually would save the district money, and open up space on the North Side for parkland and youth sports fields, then it makes no sense to rebuild Albi. Tear it down, put up the new middle school and add more open space to the city’s inventory.

It all makes sense. Unless the board is ruled by a past that should no longer be part of the future. 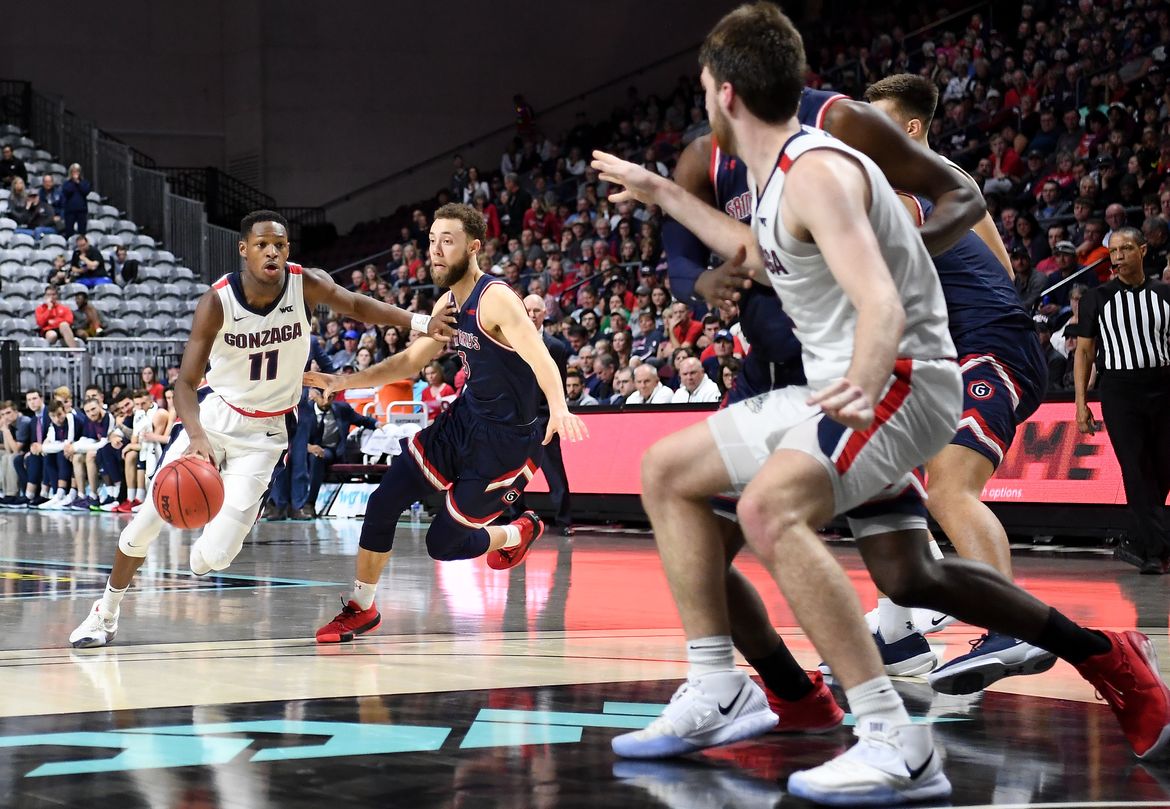 Gonzaga: It’s possible COVID-19 could derail the Zags’ national title hopes before they even start. So the school is doing everything it can to ensure such an occurrence doesn’t happen. Jim Meehan looks at the precautions the men’s and women’s teams are taking prior to and after the WCC Tournament. … Jay Bilas is one of ESPN’s top college basketball analysts. And, in some ways, one of the longest tenured conductors of the Gonzaga hype train. Justin Reed spoke with Bilas for his views on GU. … Justin also spoke with Larry Weir for the latest Press Box podcast. I’m sure the latter conversation was even more thrilling. … As the rest of the top five continue to falter don’t forget how good GU is. … Elsewhere in the WCC, the conference tournament begins today in Las Vegas, though neither Gonzaga team is in action until after the weekend. San Diego faces USF and Portland will play Santa Clara on the men’s side. … It’s been 20 years since BYU has won a conference tournament. … San Diego endured three COVID-19-caused pauses. Now the Toreros can make all the struggles  worthwhile. 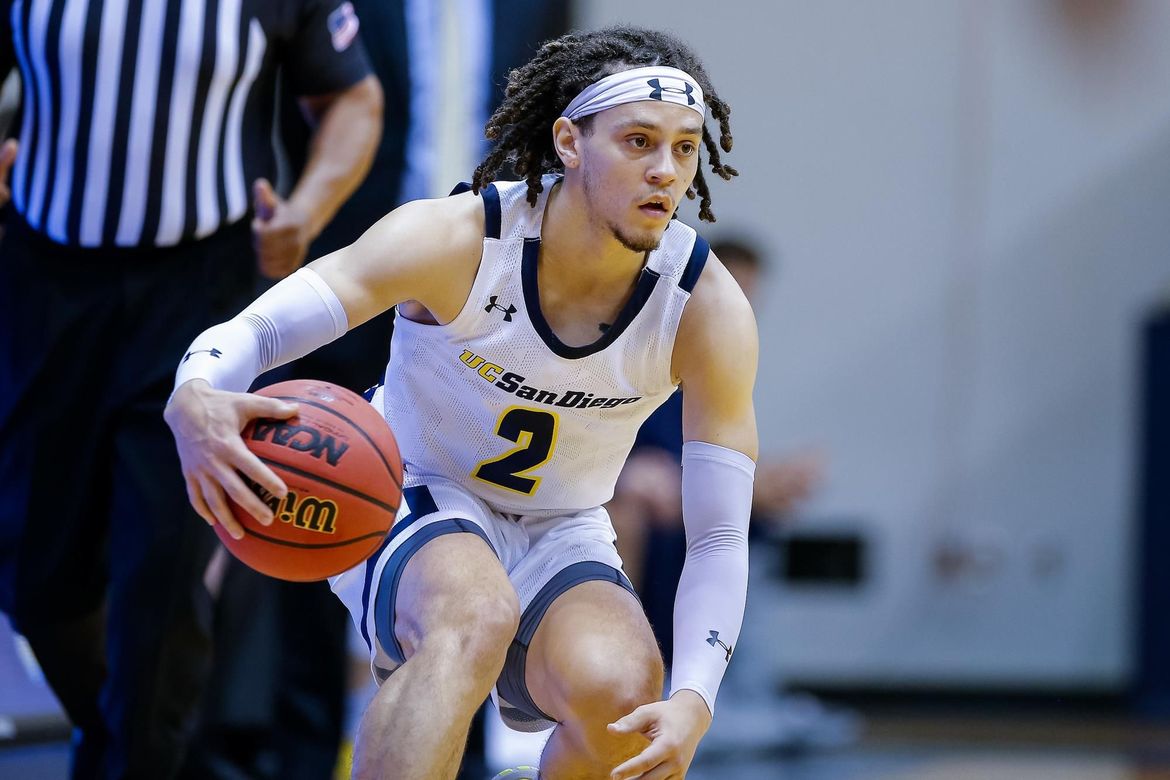 WSU: As we said above, the Cougar women defeated Utah to move on in the Pac-12 Tournament. … It looks as if Kyle Smith has attracted a transfer shooting guard to Pullman. Theo Lawson has more on Tyrell Roberts. … There can only be one first time winner of a Pac-12 swimming title for Washington State. Chloe Larson earned that honor a week ago. Dan Thompson has her story. … The Cougars’ fundraising efforts are getting noticed. … Around the Pac-12 and college basketball, there was one big upset in the women’s tournament. Washington knocked out Colorado. … Stanford is the favorite. … Oregon and Oregon State meet again, though it’s the first time in the postseason tournament. … There were three games on the men’s side last night with Oregon schools making a statement. First, the Ducks locked down UCLA in the second half and took over the conference top spot with an 82-74 home win. … USC stayed close by destroying Stanford and the Cardinal’s NCAA hopes. … Oregon State went into Salt Lake City and handed Utah another hard-to-fathom loss. Sure, the Beavers have been hot, but so had the Utes. … Colorado has to win a couple more games. … A judge rules Arizona has to release the NCAA Notice of Infractions. … In football news, we can pass on some thoughts on the schedule from Oregon and Colorado. … Arizona State is starting spring practice. 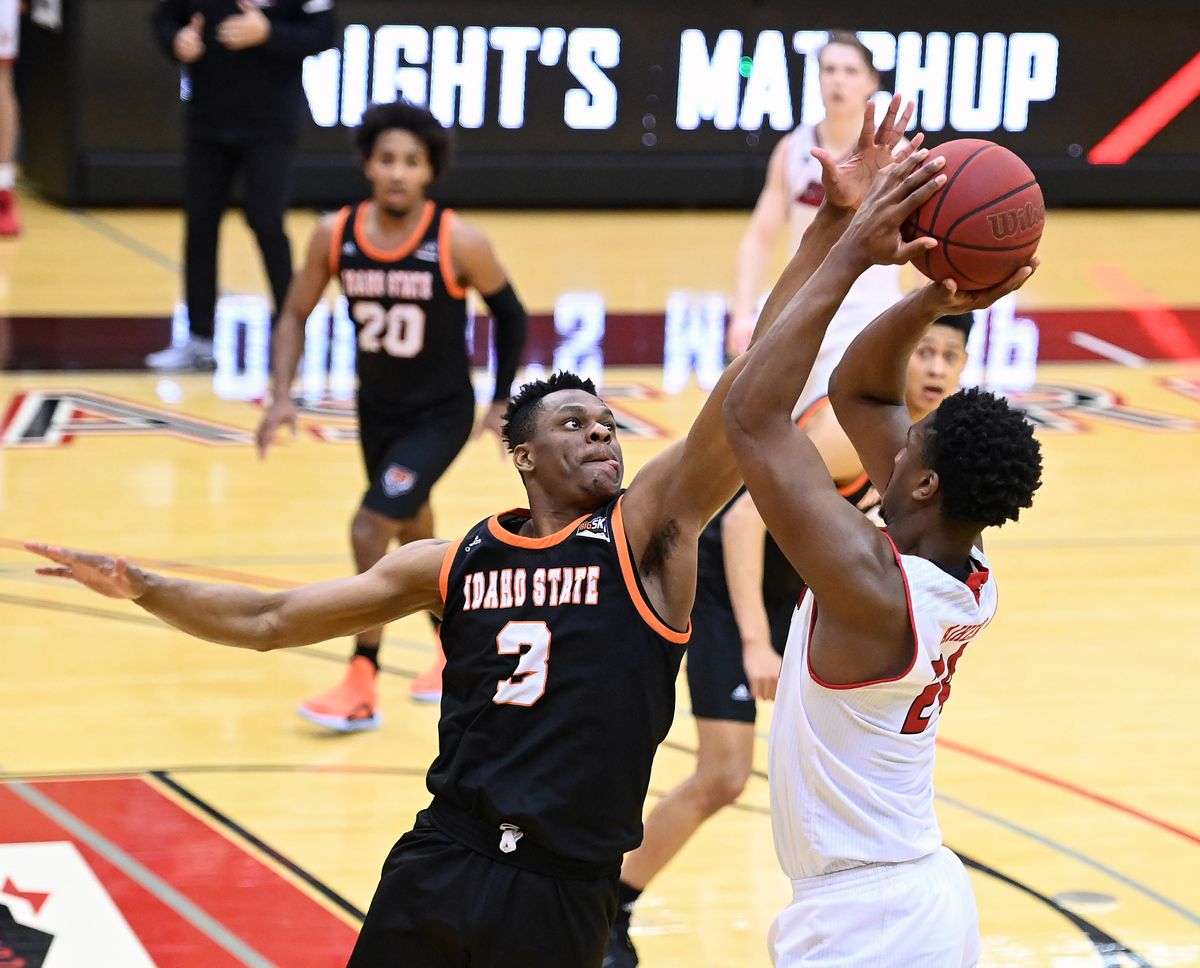 EWU: The Eagles held their second consecutive Big Sky regular season title in their hands. Idaho State knocked it out last night. Now, if Eastern is to pick it up again, it will need help. Ryan Collingwood has the particulars in this coverage of the Bengals’ 68-63 win. … Elsewhere in the Big Sky, if Southern Utah loses, Weber State can claim the conference title by sweeping Northern Colorado. … The Montana State vs. Sacramento State series has been pushed back a day. 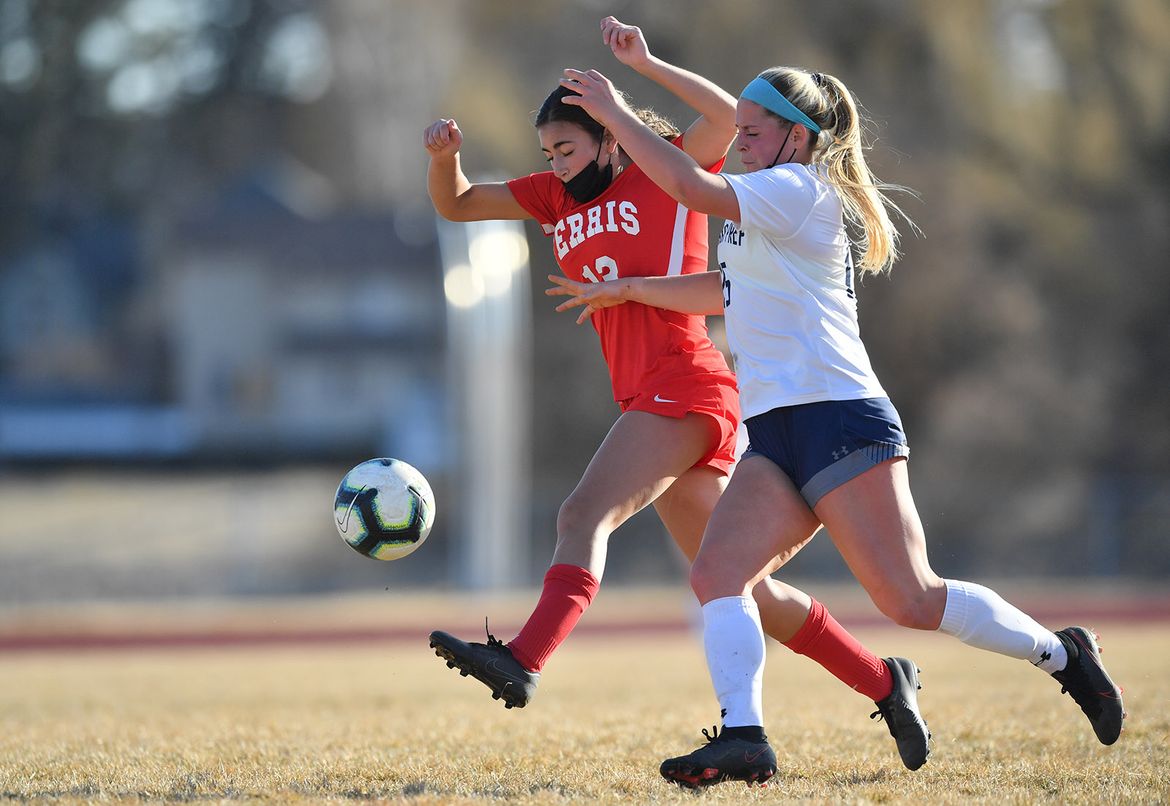 Preps: Washington’s high school sports are back on. There is one thing missing, however, from some events. Fans. Dave Nichols delves into the reasons in this column. … Steve Christilaw took a quick look at how some schools are trying to let fans at least watch games. … Football is back and Dave has a preview of this week’s Greater Spokane League games. … Soccer is also back as the girls took the field again yesterday. Dave not only put together a GSL season preview, he has a roundup of the area’s action.

Mariners: ESPN televised the M’s 8-8 tie with the Cubs yesterday, meaning a national audience was able to see what the Jarred Kelenic fuss was about. He crushed a home run. Interesting. … The bullpen may have an electric arm or two.

Seahawks: The Hawks usually don’t spend a lot of money on free agents. They don’t have to this offseason. … Their coaching staff is officially set.

• I recently strained a muscle in my back. Don’t ask me how. It’s a question I can’t answer. It’s been getting better, so much so I have forgotten about it. That must have angered it. This morning, between reading stories and beginning to write, I stretched out my right arm trying to fix a window. Big, big mistake. The overreach caused the back muscle to announce its presence with authority once again. I slowly crawled downstairs (figuratively) for a pain med or 2,000. And then began typing. Do I get a medal or something? Until later …