The coronavirus pandemic caused Spokane’s park system to hit pause on several major events and programs in 2020, even as demand for outdoor activity grew the longer people spent in quarantine.

“We were responding to the direct needs of the citizens,” said Spokane Parks Director Garrett Jones. “Just because we did these things, this way, in 2018, 2019, doesn’t mean that’s what the needs are for the citizens now.”

The pandemic pushed to 2021 the inaugural season of concerts in the newly opened U.S. Pavilion in Riverfront Park, and shuttered several of the main attractions in the remade park for all or part of the year. Revenue for the shops, restaurants and attractions in both the downtown Spokane park and South Hill’s Manito Park fell from $2.6 million in 2019 to just $830,000 last year, according to figures provided by the Parks Department. 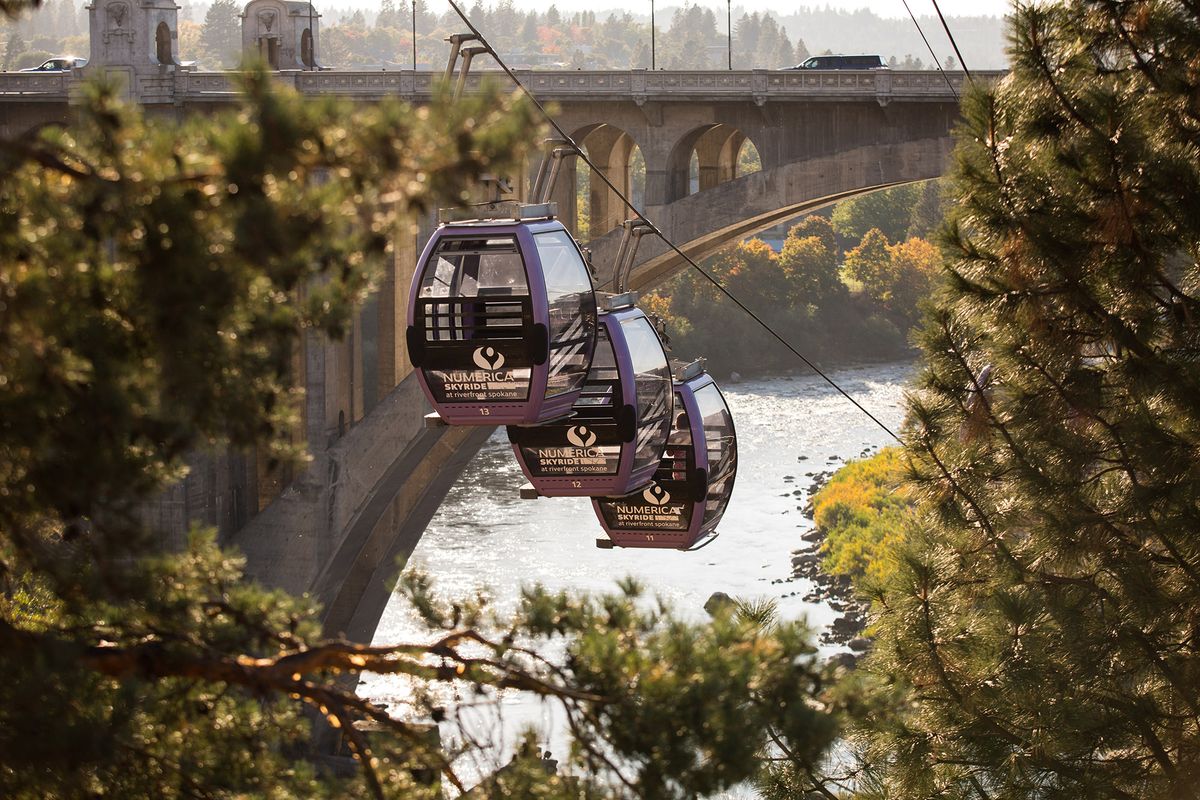 The Numerica SkyRide passes between changing trees along the Spokane River near Riverfront Park, as seen during golden hour on Oct. 6, 2020 in downtown Spokane, Wash. There are many vantage points for observing the autumnal changes in one of Spokane’s best-known parks. (Libby Kamrowski/The Spokesman-Review)

The largest loss of revenue came from the Numerica SkyRide, which closed for nearly two months when the pandemic began. Even when it reopened in May, ridership remained low for the rest of the year. In all, 84,000 fewer people rode the lift over the falls in 2020 compared to the previous year.

The Looff Carrousel only recently reopened after being shuttered. The attraction, a historic remnant of Natatorium Park, took 12,204 riders for a spin in 2020, down from more than 137,000 the year prior.

The lingering pandemic could place limits on the final celebration of the Riverfront Park redevelopment that began in 2016. The $9.3 million playground and other amenities being built in an area known as the North Bank is scheduled to open this spring, but may do so with restrictions on the attraction’s water elements.

“They do have the same requirements as aquatic centers,” Jones said of splash pads, the water features in neighborhood parks that are similar to the Ice Age flood attraction under construction in Riverfront Park. “You’d need to have preregistration and limited capacity. You would need to monitor that. That’s an operational challenge.”

Jones said Thursday during a Northwest Passages virtual event that the playground may need to open in phases later this year to adhere to health guidelines.

Despite the loss in revenue, the Parks Department in Spokane may be in better shape financially than other park systems across the country. That’s because of a requirement in the Spokane City Charter that the city spend at least 8% of its tax-supported budget year-to-year on park operations, an anomaly among other large-sized cities and a legacy of the funding system imagined by the father of Spokane’s parks, Aubrey White.

Still, that creates just a baseline of cash, and the budget for parks has remained relatively stagnant as costs for all materials have increased, Jones said. Over the past three years, the department’s expense budget has been set at about $23 million.

Without new funds coming in from attractions and recreational offerings, the department’s other big draw that took a hit in 2020, park officials have to be creative. While all other athletic leagues were put on hold in late summer, for example, the department pushed a cornhole league as a way to get people outside and playing a socially distant game OK’d by health officials.

Jones said you’ll see more of efforts like that in the coming year, especially geared toward school-age Spokanites.

“This year, there’s a lot of pandemic fatigue out there,” Jones said. “We’re reaching out to the school districts. We have a lot of our student-athletes, all their extracurricular activities have been taken away.”

One major choice the department will have to make in the coming months is whether to reopen the city’s public swimming pools, which were shuttered all of summer 2020 over concerns about virus spread. Jones said that even though there was local support to reopen aquatics centers, including a pitch from former Spokane Health Officer Dr. Bob Lutz, the restrictions imposed by state health officials made it infeasible to open in time for swimming last summer. It would have most likely meant just lap swimming and not the open sessions children and families have come to expect.

“We want to find every way possible to have that option for 2021,” Jones said.

Free admission to the city’s swimming pools was approved by the Spokane Park Board for summer 2018. In 2019, pools welcomed nearly 127,000 visitors.

The next swim season won’t be that busy, Jones admitted.

“Will it look the same as 2019? Absolutely not,” he said. “But we want to still be able to provide that service.”

Park officials hope to brief the Spokane City Council, mayor’s office and Park Board on plans for the 2021 aquatics season later this month, Jones said.

One bright spot for the department in 2020 was golf, which despite multiple shutdowns due to weather and the pandemic – including the entire month of April – actually earned about $389,000 more in revenue in 2020 compared to 2019.

“We’ve learned a lot from golf,” Jones said, noting that operating the four municipal courses required parks staff to figure out food service, retail and safe use of park space for activities.

Golf may have been the only option for some seeking outdoor recreation, he said, and the department saw an uptick in first-time golfers hitting the links. The department would like to keep those players on the course even after the pandemic subsides.

Even though the department reports revenue and expenses to the city, and has a budget to meet, Jones said the decision isn’t always about money. Sometimes, it’s about giving people an outlet, and some hope, in the middle of difficult times, like seeing the skating ribbon open during Christmastime with limited capacity.

“We know we’re not going to make a lot of money in this. There’s something about being able to open a facility,” he said. “Just knowing, during the holiday season, that this is going to be open. It brings joy as well, rather than just having that section of the park stay dark.”