A GRIP ON SPORTS • Every day this time of year we are reminded how far our society has come concerning women in sports. We see it in the gym, on television, in fields and courts everywhere. And yet, way too often we also are reminded way how far there is to go.

• We were looking forward to tonight. A chance to head over to Gonzaga, find a rare perfect parking space, walk through the rain and sit courtside to watch the women play Portland. Their 6 p.m. contest with the Pilots was scheduled after our high school practice (or Kim’s work) though early enough to get home for our typical bedtime. In other words, perfect. 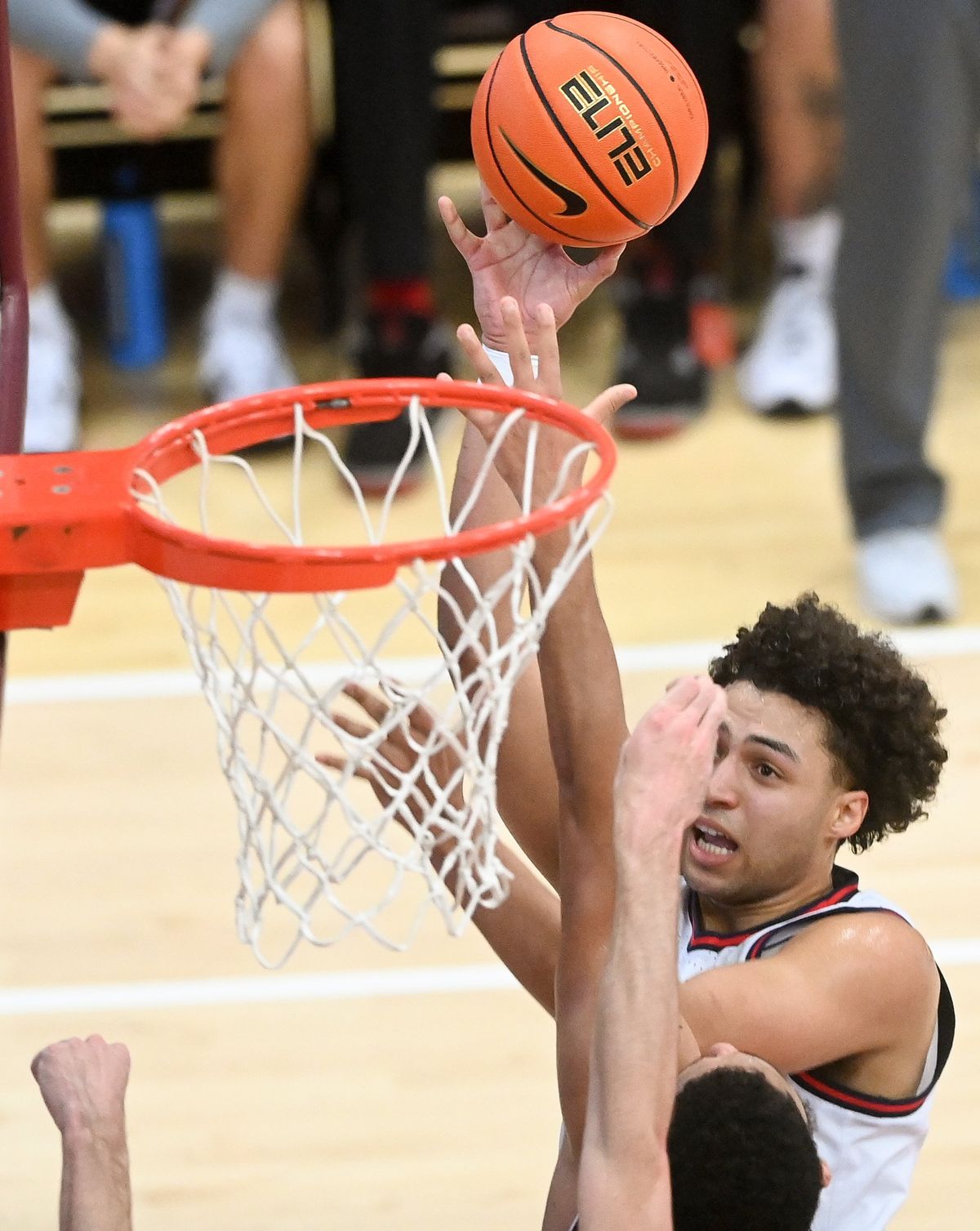 And yet tonight we won’t be attending the Gonzaga women’s game, even though we have tickets in hand. Covid worries? Nope. We are past those. We have been stymied by something with a lot longer history.

The Gonzaga men needed the time slot. For TV. So the women had to move. Sound familiar? Way too familiar?

The West Coast Conference was looking for an opening to reschedule the Bulldog men’s home game with San Francisco, a key matchup for the league. The game, originally scheduled for Jan. 6 but postponed due to the Zags’ COVID-19 issues, has to be played at some point for a lot of reasons, though mainly to help bolster the Dons’ case for an NCAA at-large berth.

When Pacific went on a virus-caused pause, tonight suddenly came open for the GU men, as they were scheduled to be in Stockton. The powers that be decided today was the right day for the USF game. In Spokane. Fine. But it’s impossible to have two games in the Kennel without a two-hour gap between. That’s needed to clear the crowd from the first and prep the arena for the second, even without concessions or other amenities due to virus restrictions.

Only one program can have the prime after-work spot. This pains me to write, because it is 2022 and it shouldn’t be pre-ordained, but that spot was always going to be filled by the men. And the women would have to play at whatever time was left over.

We’re not brain-dead. We understand a big part of the motivation is TV. The No. 1-ranked men are a national draw. CBS wanted the game for its secondary network. The 8 p.m. PST slot was open and that was that. Hundreds of people nationwide will get to tune in to hear Rich Waltz’s play-by-play. Good for them. 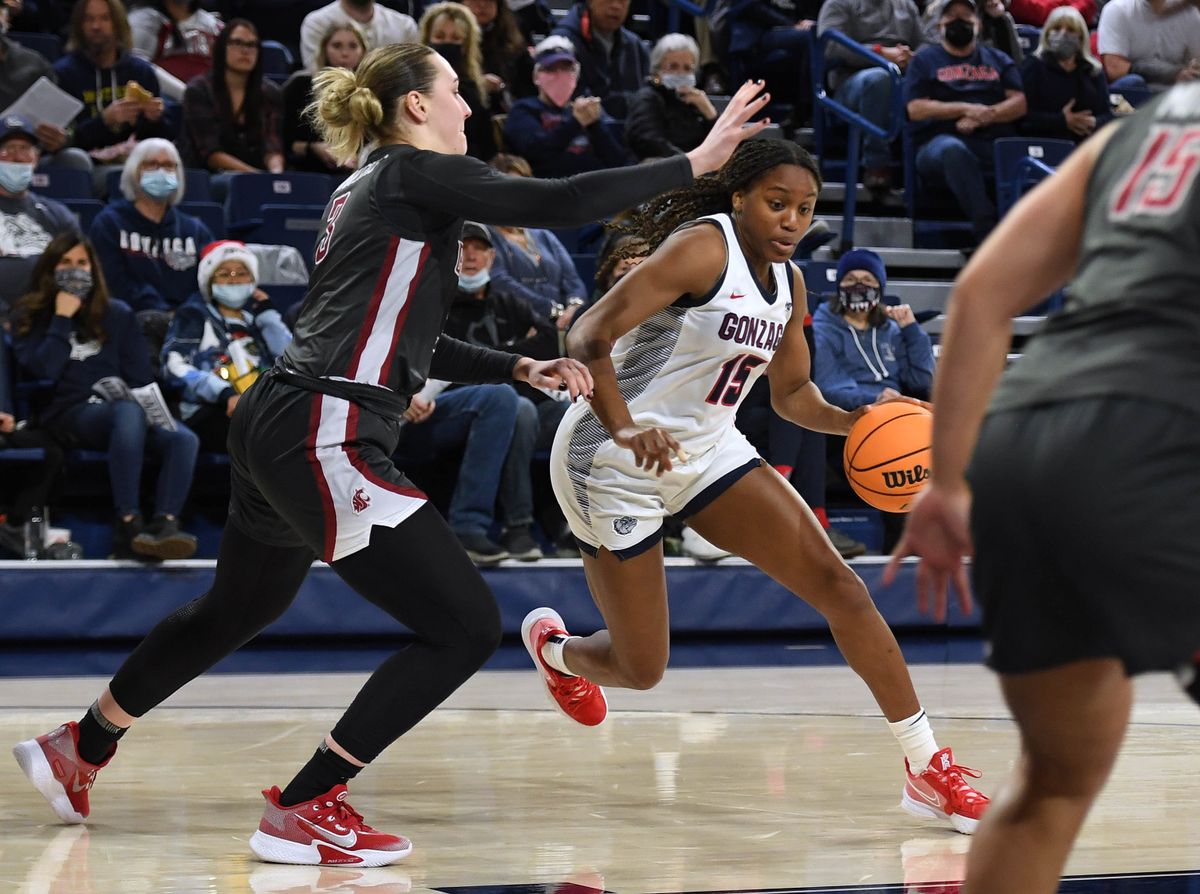 The 5,000 or so folks who support the women’s program with their wallets, voices and smiles? They are out of luck if they have jobs or other obligations.

And the women who wear Gonzaga across their jersey, playing their heart out each day for their program? Sorry, it’s a pandemic. You have to be flexible. Though, of course, over the past 50 years it’s always the women who have had to be flexible, pandemic or not. Their game starts at 4 today. This is not just something that would happen with the Zags, of course. It is just more visible due to the success the school has experienced with both programs. And that success translates into rabid fan bases that overlap but also have separate followings.

There won’t be complaints. There won’t be a bunch of disrespectful quotes. They’ll play. They’ll give their all. And they won’t rock the boat. So we will.

Some 40 years ago, we stood waiting for a men’s college basketball team to take the court. The women from the same university were still playing. The game was pushing back the men’s team’s warm-up time and the coach was ticked. He said something about the female players getting back to the kitchen. It ticked me off then. It ticks me off to this day. It was wrong then. Its buffed-up, less-blatant modern counterpart is wrong now. But it does illustrate one thing. 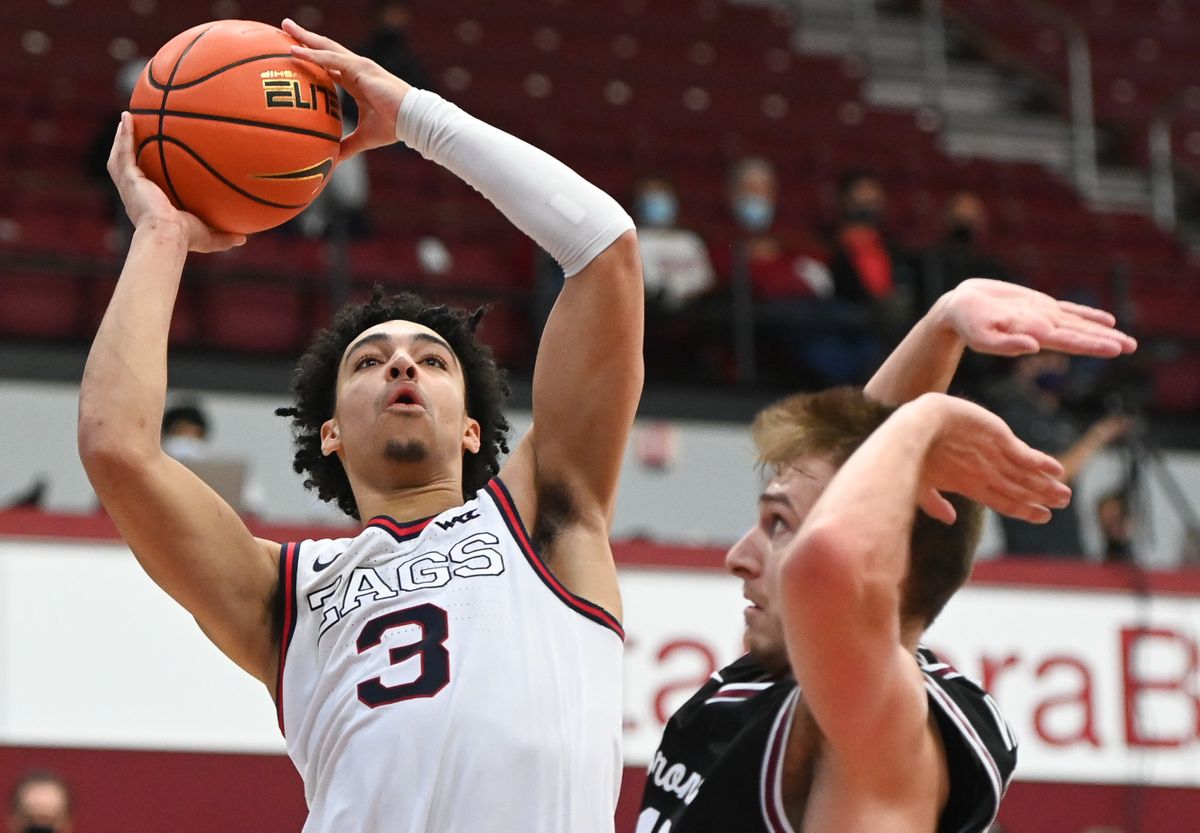 Gonzaga: San Francisco is really good. Maybe the best it’s been in 30 years. Jim Meehan has a preview of tonight’s contest, which pits two of the top 34 teams in the NCAA NET rankings. … He also has the key matchup. … The women will be playing Portland for the second time in two weeks. But the Pilots will be a bit different. Jim Allen tells us how in this game preview. … Jim also has a feature on a player who sliced up Portland in the first meeting, Yvonne Ejim. … The game with USF that had to be postponed in December will now be played on Feb. 7. Jim has that as well. … Back to the men, some folks don’t think they are a top-two team right now. … Andrew Nembhard is one of the nation’s top point guards though. … Around the WCC, the BYU women are reaching unseen heights. … The Cougar men face San Diego tonight. 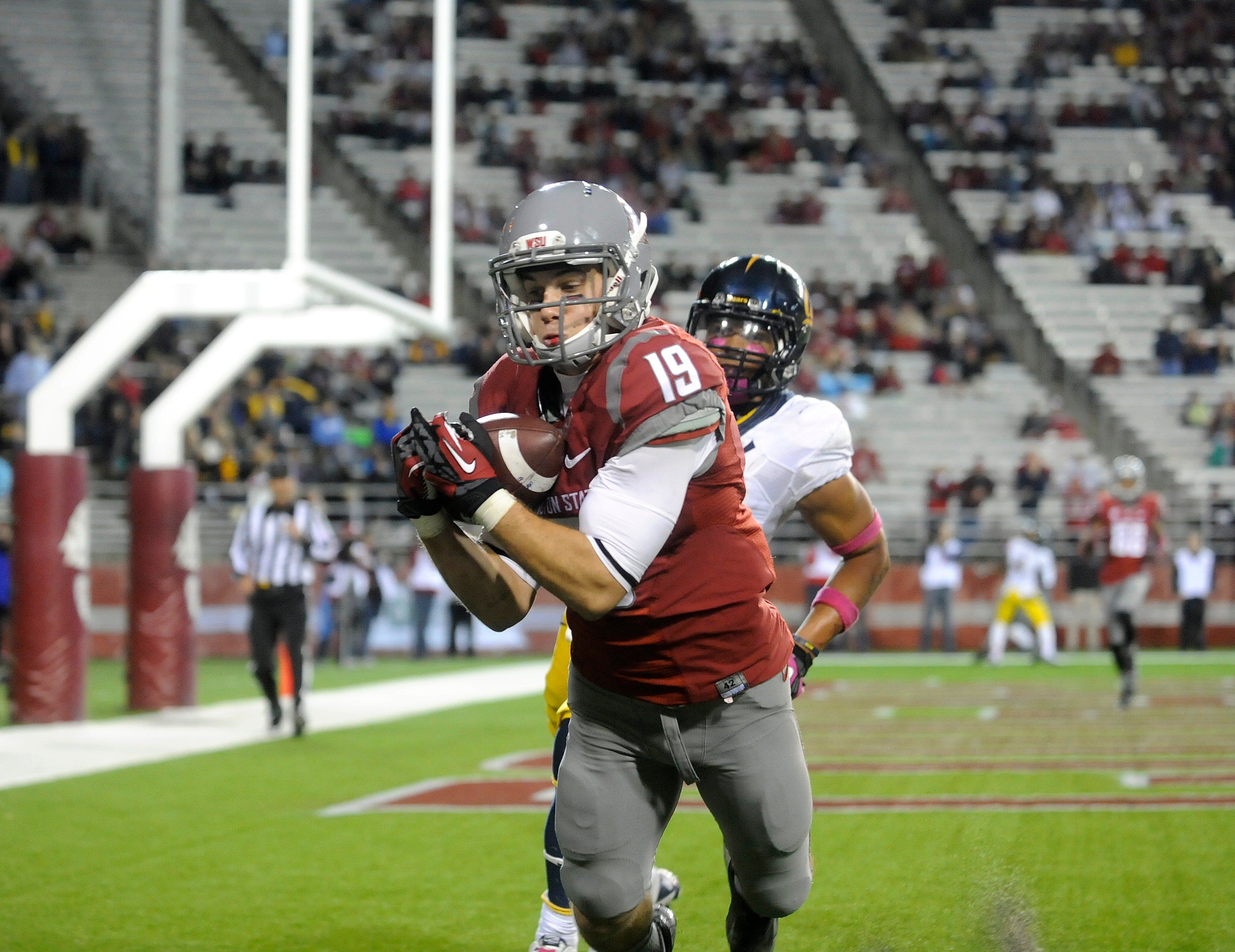 WSU: If you remember Brett Bartolone when he was running routes and catching passes at Washington State, you have a good memory. It was a while ago, back in the early days of Mike Leach’s tenure. Bartolone has a new coaching gig, having been hired yesterday to be Deion Sanders’ offensive coordinator at Jackson State. Colton Clark has the story. … Backup kicker Andrew Boyle has put his name in the transfer portal. Colton has that story as well. … The women had to postpone games with Oregon and Oregon State this weekend due to virus issues. … Elsewhere in the Pac-12 and college basketball, Washington is beginning to jell. … A couple of Oregon State players are asserting themselves. … Colorado has owned USC recently but that could change tonight. … UCLA has a lot of experience and a couple of youngsters making big contributions. … Arizona plays at Stanford tonight in a game that should be tougher than most think. … The brouhaha in the women’s game between Oregon and Arizona hasn’t gone away just yet. Adia Barnes tried to put it to rest yesterday. Both of those schools are among the conference’s best. … In football news, we linked this yesterday but Jon Wilner’s peek ahead at next season ran in today’s S-R. … We can pass along a few observations on Washington’s upcoming season. And two games for way down the road. … Arizona State has picked up a defensive line transfer from Miami. … More Colorado players are leaving. Another former Buff ended up at USC. … Utah lost $31 million in the past fiscal year. … Rivalries are fun. 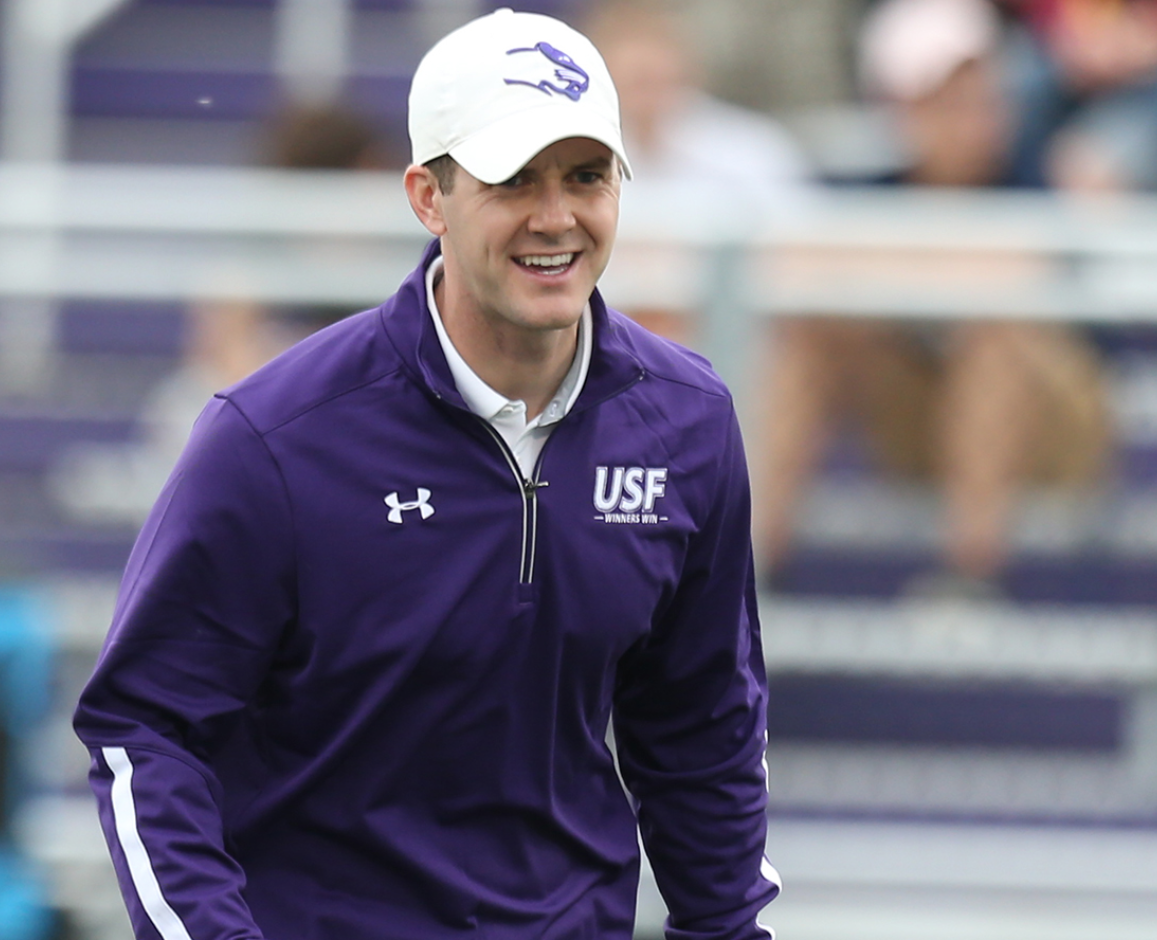 EWU: The Eagles return to the court tonight to host Sacramento State. Dan Thompson has this preview of the first game since Eastern’s virus-caused hiatus. … Jim Chapin will fill the role of offensive coordinator for Aaron Best’s football team next season. Dan has more in this story. … Around the Big Sky, Montana is back at it against Portland State. … It’s only been a few days but Weber State and Idaho State play again. … The makeup games are starting to pile up for Northern Colorado. … Montana State picked up a football transfer from Georgia. 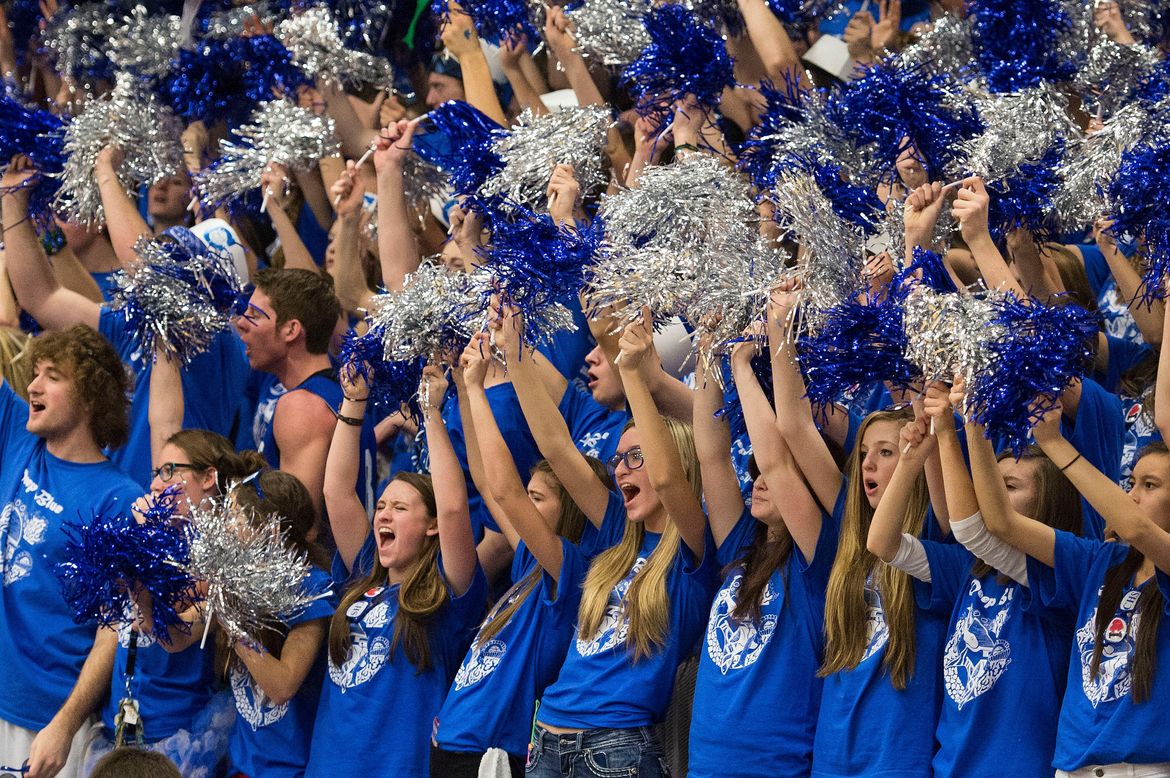 Preps: There will not be a spirit competition between Coeur d’Alene and Lake City highs this Friday when the schools meet in hoops. As Dave Nichols tells us, the competition has been canceled due to COVID-19 concerns. However, fans will still be allowed to attend. Huh. … Dave also has a roundup of the events in the area Wednesday night.

Seahawks: Pete Carroll is interviewing candidates for the vacant defensive coordinator spot. No big names yet, but a lot of up-and-coming coaches. … Just how is the Hawk brain trust going to handle the offseason? … Finally, Russell Wilson and the Hawks need to stay together.

Kraken: February will feature a lot of games as the NHL reschedules postponements in what was to be the Olympics pause.

Mariners: The international talent the M’s signed recently may be a sign of things to come. … The M’s farm system has quite a few highly prized prospects.

• Did personal inconvenience play into my thoughts this morning? Yes. In that if we hadn’t been personally impacted, we wouldn’t have been aware of what was happening. But it’s not the driving force behind the thoughts. Those are informed by similar occurrences in the recent past. As my dad used to remind me, the more things seem to change, the less that really changes. He was fine with it. His son isn’t. Until later …