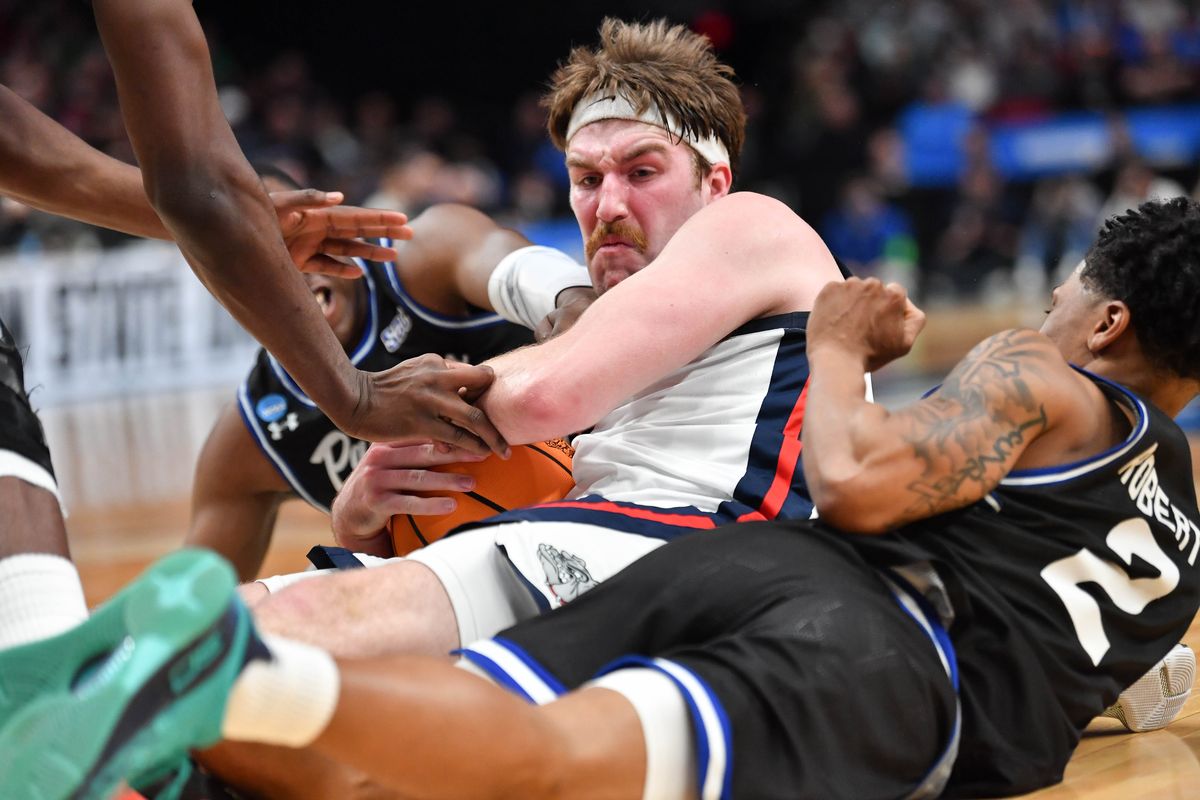 Gonzaga Bulldogs forward Drew Timme (2) wrestles for a loose ball against Georgia State Panthers guard Justin Roberts (2) during the first half of the first round of the NCAA Division I Men’s Basketball Tournament on Thursday Mar 17, 2022, at the Moda Center in Portland, Ore. (Tyler Tjomsland/The Spokesman-Review)

Georgia State hung with Gonzaga for 30 minutes, making the most of a sloppy, physical game and looking to become the second No. 16 seed to win a game in an NCAA Tournament.

The Bulldogs blew the game open late and ran away with a 93-72 win over the Panthers in Portland, behind impressive performances from its frontcourt duo.

The Bulldogs (27-3) finished 36 of 71 from the field, scoring almost all of their points in the paint – a recipe that may not work for the remainder of the tournament. Gonzaga shot 5 of 18 on 3-pointers and made 53% of its free throws.

Next up for the Zags is a meeting with No. 9 seed Memphis on Saturday, who took care of former Gonzaga assistant Leon Rice and Boise State earlier in the day. The Penny Hardaway coached Tigers (22-10) have won seven of their last eight games.

PORTLAND – Usually sporting a Sony 4K camcorder, Dave Holmgren had built up a cult following for his old-school antics while following his son Chet on his basketball journey. | Read more »

TV take: Gonzaga toughens up in second half to pull away from Georgia State in NCAA Tournament first round

As Mark Few headed to the Moda Center locker room at halftime in the Zags’ opening-round NCAA Tournament game with Georgia State, he had to stop to complete a mandatory television interview. | Read more »

Timme gets a cherry-picked dunk in transition to lead with four points. The Panthers aren’t backing down early as the 16 seed, 3 of 9 from the field and tied with the top team in the nation at the U16 media timeout.

* Note this is only a reenactment, we are not allowed to post highlights … but this is just as good pic.twitter.com/GPibFzrKXl

DREW TIMME AND-1 TO START THINGS OFF FOR GONZAGA 😱#MarchMadness pic.twitter.com/TUNhwHFWRB

Hunter Sallis getting plenty of minutes early, as Watson finds him under the hoop with a pretty behind-the-back feed. That play served as a four-point swing as the Panthers missed a gimme layup on the other end after a steal.

Anton Watson drops the BEHIND THE BACK assist for Gonzaga 🤯#MarchMadness pic.twitter.com/5QZxPHjCaT

7:49 - GU 21, GSU 21: Panthers bullying the Bulldogs in the post, gathering six offensive rebounds to hold a 17-13 advantage on the boards at the U8 media timeout.

6:20 - GU 23, GSU 23: Nsoseme is down on the floor holding his right knee and appearing to be in a lot of pain. The last thing the Panthers want to see, as the big man had been controlling the post with five rebounds.

He was able to get up and walk to the bench under his own power.

The Zags are 2 of 11 on 3-pointers and 7 of 17 from the line. The only thing keeping GU in the game is Georgia State’s inefficiencies. The Panthers are shooting 25.8% from the field.

Timme leads with eight points, but is 4 of 9 on free throws.

Gonzaga should take a lead into the locker room, where Mark Few will look to wake up his team that was favored by over 20 points.

Gonzaga struggled on the offensive end, limping to a 35-33 lead at halftime in the first round of the NCAA Tournament.

The Bulldogs shot 40% from the field, which included a stretch of 12 straight misses, made 2 of 11 attempts on 3-pointers and shot 9 of 19 on free throws.

Drew Timme led with 10 points and eight rebounds, but the Panthers held a 28-23 advantage on the glass, cleaning up with second chance points.

GSU has had an even tougher time from the field making 10 of 35 attempts.

Timme is up to 20 points leading the way in the second half as Bolton is the only other Zag in double figures with 10.

Allen leads GSU with 13 points, while Roberts adds 11. Not much separating the two teams. Panthers hold a 10-9 advantage on free throws despite seven less attempts.

Justin Roberts hits the tough jumper 💪@GeorgiaStateMBB is keeping it close against the Zags 👀 #MarchMadness pic.twitter.com/qIlLu8hifR

Holmgren is up to 12 points, 15 rebounds and six blocks, as he and Timme both have double-doubles.

Scott fouled out for GSU, whose bench is starting to run thin after loosing Nsoseme to an injury in the first half.

Timme leads with 32 points, while Holmgren has 16 points with 17 rebounds and seven blocks.

1:10 - GU 93, GSU 67: Arlauskas checks in and converts a reverse layup, putting a bow on what was an excellent late run from the Zags, after struggling for a majority of the game.

Gonzaga enters the NCAA Tournament with the top overall seed for the second straight year and the same question coming from fans and commentators across the country – will Mark Few and the Zags finally get the monkey off their back?

The Bulldogs (26-3) begin their chase for the first men’s basketball championship against 16-seeded Georgia State in Portland at 1:15 p.m. on TNT.

The Panthers (18-10) earned an automatic-bid by winning the Sun Belt Tournament over Louisiana. GSU started the season 8-10, before winning 10 straight to finish 3rd in the conference.

Meanwhile, the Zags are coming off an impressive West Coast Conference championship win over Saint Mary’s, where Gonzaga avenged its conference to the Gaels.

The winner will advance to play No. 9 seed Memphis on Saturday, who beat Boise State 64-53 this morning.

Time to write our next chapter 📝#MarchMadness x #UnitedWeZag pic.twitter.com/jXu7HL7bQD

Here are just a few recent issues of ⁦@SpokesmanSports. ..⁩. If you’re a fan of #Gonzaga basketball and you’re not reading the ⁦@SpokesmanReview⁩, subscribe here: https://t.co/DyYcjL5kFy pic.twitter.com/9odmr8OFyd

The Bulldogs haven’t lost in the first round of the NCAA Tournament since 2008, where they lost to Davidson and a player named Steph Curry as a No. 7 seed. 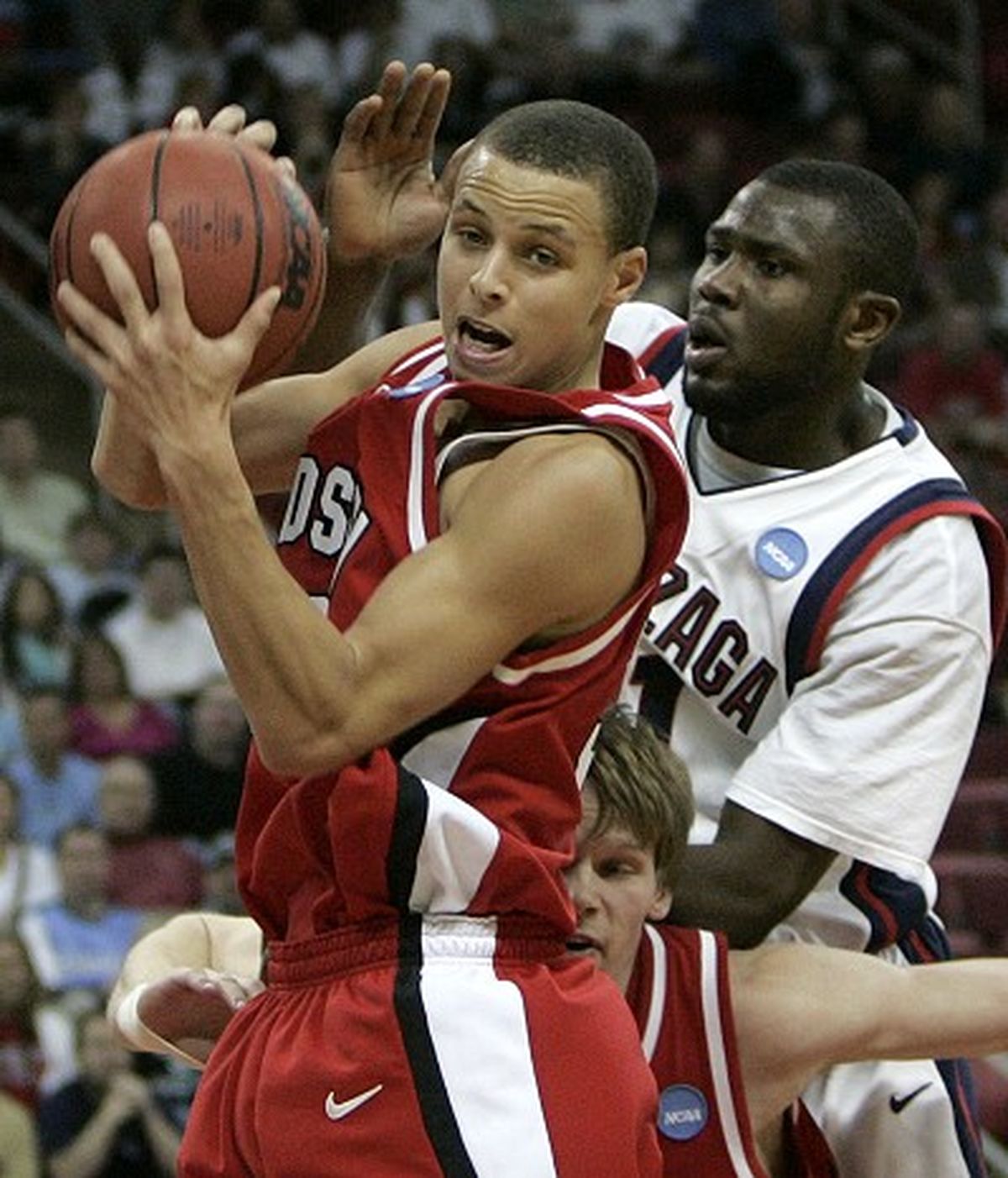 ‘This is not a 16 seed’: Gonzaga won’t overlook Georgia State in NCAA Tournament opener

A 29-point effort from Corey Allen in the semifinal round of the Sun Belt Conference Tournament was good enough to lift Georgia State over Appalachian State for a 71-66 victory. | Read more »

Dave Boling: In the earliest days of Gonzaga’s brush with the Big Dance, the message was simple – ‘Get the round thing to the bald thing’

In 1995, Gonzaga coach Dan Fitzgerald, showman, comedian, curmudgeon, colorful story-weaver, was asked how he managed to get his team rolling late in the season and earn the school’s first NCAA trip. “I kept telling them: ‘Get the round thing to the bald thing’.” The round thing: A basketball. The bald thing: John Rillie. | Read more »

From (Double) Zero to 55: When it comes to Gonzaga men’s basketball history, these numbers add up to greatness

Richard Fox transferred to Gonzaga from the University of Colorado in 2001, sat out the next basketball season as the penance the NCAA exacted before the current portal free-for-all and readied himself to suit up for 2003. | Read more »

We connected with 247sports’ Ben Moore for a Q&A to learn more about the Panthers. He’s covered Georgia State basketball for 15 years and, in his words, attempted to walk-on in 1999-2000 when Lefty Driesell was the head coach. | Read more »

Sophomore wing Julian Strawther chose a memorable dunk. Senior guard Rasir Bolton picked one that happened in practice, seen by just Gonzaga’s players and coaching staff. Head coach Mark Few recalled something that only he and maybe a handful of others witnessed. The question to each: What’s your favorite highlight produced by freshman forward Chet Holmgren? | Read more »

Former Gonzaga great Dan Dickau, longtime announcer on Gonzaga’s local and regional telecasts, is calling first- and second-round games in Portland for Westwood One Radio.Dickau took the last few weeks off from his broadcasting schedule to stay close to home with wife Heather, who was pregnant with their seventh child. Margaret Rose was born last Friday. | Read more »