WARSAW, Poland – The first thing he noticed upon arriving in Ukraine’s shattered capital of Kyiv was the stationary train.

“One entire train of the metro isn’t even moving,” said Jared Malone. “And it’s because people are living on it. You know, all their kitchen supplies are in there, blankets, towels, people sleeping on the floor.”

Malone is a Marine veteran who now lives in Post Falls and works as a counselor. He arrived in Ukraine on March 22 and is working with a church in Lviv, a western city mostly spared from fighting. But on Friday he took an overnight train to Kyiv, with plans of bringing a family back west.

He knew Kyiv would be intense. He served two combat tours in Iraq so he’s familiar with war. But what he’s seen over the course of three days shocked him.

The streets of the country’s capital city are covered in glass, the consequence of shock waves from bombs. Residents leave their windows open so concussions don’t break them. The roads are nearly empty other than military checkpoints, one every 200 meters, he estimated.

“It’s like something out of an apocalyptic movie,” he said. 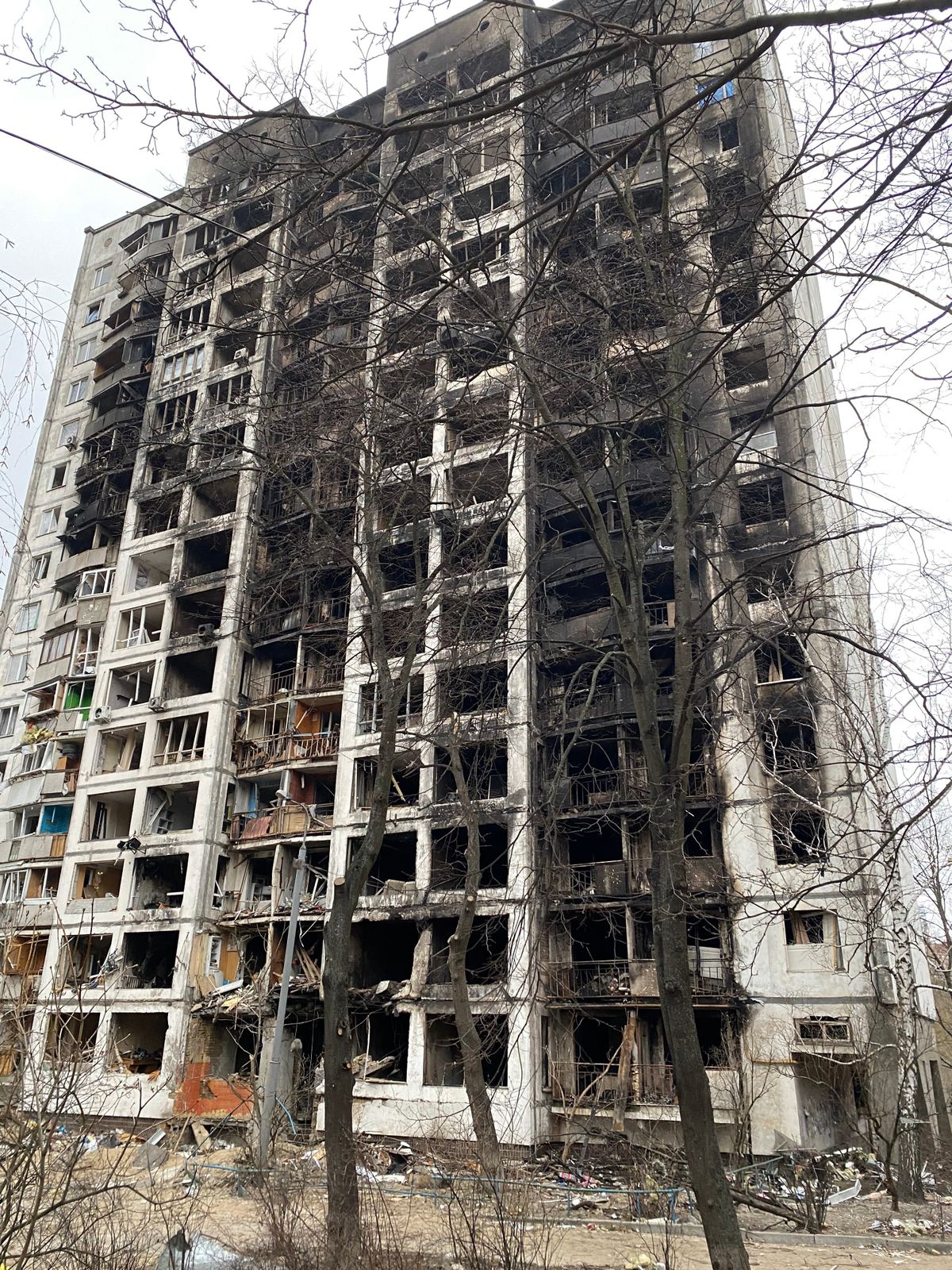 A destroyed apartment building in Kyiv, Ukraine as seen on March 26, 2022. (Courtesy of Jared Malone)

At each checkpoint he was interrogated, his passport examined, his motives questioned. Soldiers searched through his phone checking to see if he’d taken photos of buildings or fighters, suspicious he was a Russian spy. All this happening to the drumbeat of artillery and bombs exploding on the city’s outskirts, the noise making it seem as if everyone was whispering.

Malone had been in Kyiv for three days as of Monday, and he’s accompanied by two Ukrainian men affiliated with the Victory Christian Church. While in Lviv, the western city, he’s staying and working with that church although the churches’ main congregation is in Kyiv.

On Friday, Malone met with the main pastor in Kyiv to coordinate support and supplies from America. Malone has raised about $18,000 so far. After meeting with the pastor he contacted some families with disabled children trying to coordinate pickups and evacuation from Kyiv to Lviv.

He spent that night at the home of one of his Ukrainian friend’s parents.

The man’s parents fled Kviv about a month ago. Getting to that house was harder than he’d anticipated.

“When we pulled into the neighborhood we were immediately interrogated, and they were upset,” he said of the soldiers at the checkpoint.

The soldiers yelled at him and his two Ukrainian friends. Asked why they were there, particularly after seeing Malone’s body armor, they grew even more suspicious. This lasted for 10 minutes and Malone was getting “pretty scared.”

But then his friend spotted a soldier with whom he’d grown up. The solider vouched for them and they made it into the neighborhood. Snow fell that night and the house was freezing. They cooked eggs over a propane stove.

“Constant bombs here,” he texted. “Going to sleep in a freezing house with no electricity to the sound of explosions.”

He spent Saturday touring the city with his friends, documenting the damage to civilian areas, upon their request. That included a visit to the shopping center that was bombed on March 21, killing eight people. Shrapnel from that explosion sprayed upward, pockmarking the sides of nearby apartment buildings. He hopes his photos and videos will inspire more people he knows, through his church, friends and family, to donate.

“They want people to understand that civilian structures are being targeted,” he said.

He also visited a children’s hospital that evening and spoke to overwhelmed doctors. On Sunday he went to a local grocery store and bought food for some elderly residents who couldn’t leave their home. Most grocery stores are closed, from what he’s seen, although one that’s located in a basement continues to operate and “seemed like it had plenty of food.”

Malone also continued to try and make arrangements with a stranded family, although phone calls started to fail Monday afternoon. As of Monday evening he was still deciding whether to return to Lviv or wait to connect with a family ready to leave.

“It’s heartbreaking thinking we may have to leave without reaching people. I’ve been angry and frustrated most of the day. One family requested evacuation but they are in occupied territory and can’t get out. They have a sick daughter. We can’t do anything for them,” he texted.

“I feel like Kyiv is getting more tense by the minute.”

Spokesman-Review reporter Eli Francovich is in Eastern Europe to cover stories with ties to Spokane. Francovich’s articles will appear throughout the week. His trip was paid for largely by Spokesman-Review readers who have donated to the Community Journalism Fund and through the newspaper’s Northwest Passages event series. To help support this trip and similar newsroom efforts, contributions can be made at www.spokesman.com/thanks