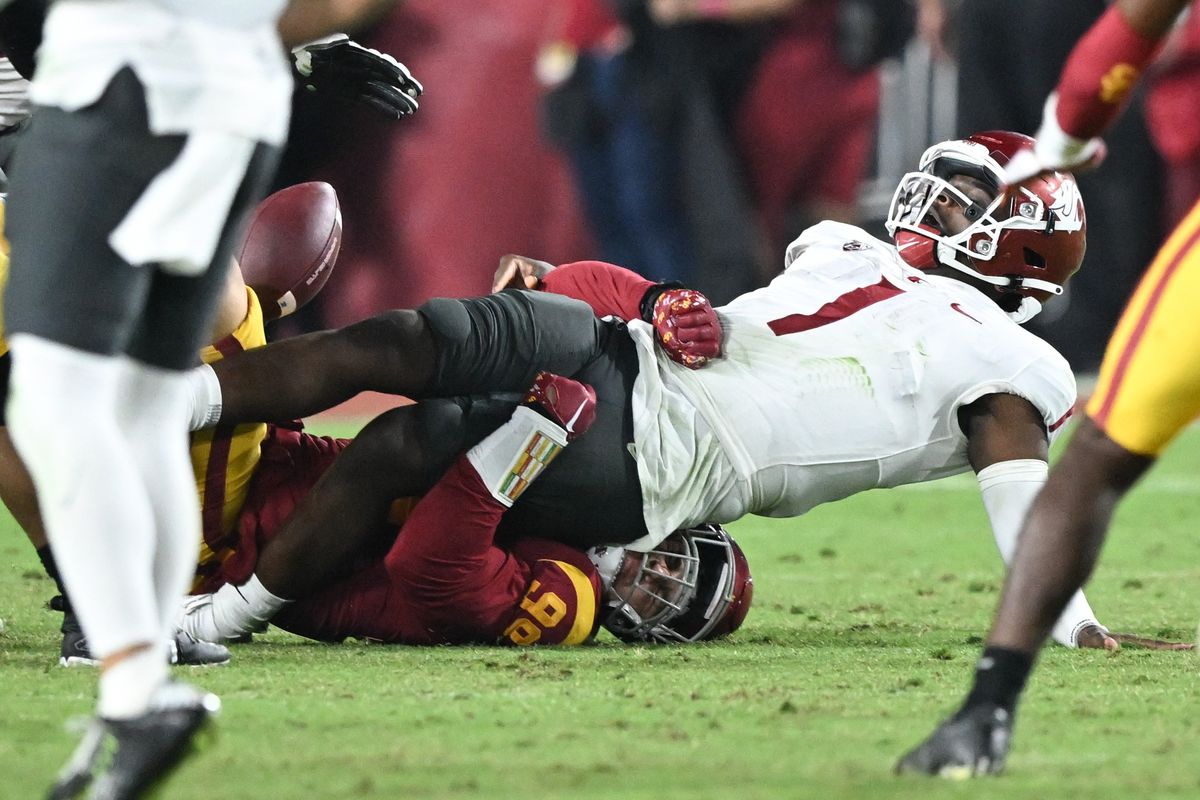 LOS ANGELES – Southern California cruised to a decisive win behind its defense and unrelenting rushing attack.

Washington State didn’t do itself any favors, accumulating a slew of penalties during a 30-14 loss.

USC running back Travis Dye ran for 151 yards and a touchdown, while quarterback Caleb Williams completed 15 of 29 attempts for 188 yards and two touchdowns. And when they weren’t moving the ball on their own, the Cougars gave them a boost.

WSU committed 11 penalties for 106 yards in the game. The defense extended both of USC’s touchdown drives in the first half – an offsides penalty on 3rd-and-4 and a pass interference in the endzone against Armani Marsh.

Williams also drew the Cougars offside in the third quarter allowing him a free shot into the endzone, which he completed to Mario Williams for a 24-yard score.

Cameron Ward and the Cougars offense was also 4 of 13 on third down conversions. Ward completed 19 of 32 attempts for 172 yards and two touchdowns. He was sacked five times.

WSU’s offense was sparked by freshman running back Jaylen Jenkins, who ran 13 times for 130 yards and hauled in a 48-yard pass that set up the Cougars first touchdown.

Despite the woes it was a decent showing for the Cougars against one of the top teams in the country. A team that figures to compete for not only the Pac-12, but a spot in the College Football Playoffs.

And now with a 10-62-4 all-time record against USC, WSU may feel relief it could be the last time they face the Trojans, who make the move to the Big Ten in 2024.

TV Take: It was a tough to switch from Mariners historic comeback to catch beginning of WSU-USC

It happened. The worst thing possible. The Mariners’ tied their playoff game with the Blue Jays just as the Washington State football team was scheduled to start their game at No. 6 USC. | Read more

LOS ANGELES – Washington State came into the game with a healthy roster, but the Cougars lost a couple of their top contributors to injuries during Saturday’s 30-14 Pac-12 loss to No. 6 USC. | Read more

LOS ANGELES – Washington State right guard Grant Stephens was tagged with a targeting penalty and ejected during the third quarter of the Cougs’ game Saturday against No. 6 USC. | Read more

The Coliseum crowd with about 10 mins till kickoff between No. 6 #USC and #WSU (RV). pic.twitter.com/urGZoY1Oiw

An offsides called on WSU near midfield extended the Trojans’ drive.

USC starts again on their own 40. Not an ideal start for WSU fans.

3:32 – USC 10, WSU 0: Caleb Williams is sacked by Armani Marsh on third down and the Trojans settle for a 31-yard field goal by Denis Lynch.

WSU drove 92 yards in eight plays for the score.

💪 @WSUCougarFB gets on the board!

Ferrel powers through for the TD ⚡️ pic.twitter.com/t1U9JjfCld

Ward heaved a prayer earlier in the drive, which was answered with a 45-yard catch by Jaylen Jenkins to set up the touchdown.

Jenkins fights off the PI and still makes the catch for @WSUCougarFB 💪 pic.twitter.com/Ha4ejp6W1C

8:29 – WSU 14, USC 10: Cameron Ward’s shovel pass attempt on 3rd-and-7 hit the ground after a diving attempt by Robert Ferrel and is overturned after video review.

The Cougars punt to the USC 35, where the Trojans take over.

The Cougars have seven penalties for 63 yards in the half. The Trojans have three for 35.

Dye finds his way in the end zone for the @uscfb TD! 🔥 pic.twitter.com/IRFMS2TEBw

0:20 – USC 17, WSU 14: The Cougars defense comes up with a key stop and the Trojans pin them deep right before halftime.

USC will receive to start the second half.

Washington State is playing USC close at the half, but penalties have been killer.

Both of the Trojans touchdown drives were extended by penalties against the Cougars defense. WSU has seven penalties for 63 yards. USC has three for 35.

Penalties aside, both teams have played similarly. WSU is 2 for 6 on third down, while USC is 2 for 7. The Cougars have 181 yards to the Trojans’ 190.

WSU quarterback Cameron Ward has completed 12 of 16 yards for 123 yards and two touchdowns, but running back Jaylen Jenkins has been the difference. He miraculously came down with a 45-yard heave from Ward to set up a short touchdown and has five carries for 54 yards.

USC quarterback Caleb Williams is 10 of 18 for 125 yards and a touchdown. Travis Dye has 11 carries for 54 yards and a score.

The Trojans will receive the kickoff to start the third quarter.

13:59 – USC 17, WSU 14: Brenden Rice drops a pass from Caleb Williams that would’ve moved the chains, but instead the Cougars force a 3-and-out to start the half.

The Cougars start on their own 35.

More penalties cost the Cougars. This time a defensive holding/unsportsmanlike conduct combination negates an interception and sets up the Trojans in plus territory.

1:36 – USC 24, WSU 14: Cameron Ward is sacked on third-and-forever after an illegal blindside block backed them up, along with a targeting call on offensive lineman Grant Stephens, who was ejected.

9:09 – USC 27, WSU 14: The Cougars defense finally stop the Trojans drive inside the redzone and force a 27-yard field goal to keep it a two-possession game.

7:29 – USC 27, WSU 14: De’Zhaun Stribling drops a first down pass and the Cougars opt to punt on 4th-and-11. Would take a stunning comeback for WSU to make up the 13-point difference now.

2:08 – USC 30, WSU 14: Another field goal from USC will nearly seal it, this time from 31 yards. Cougars need a quick score, 2pt conversion, onside kick recovery, another quick score and another 2pt conversion to tie.

Wins have been few and far between for Washington State over USC. One Saturday would shake up not only the Pac-12 standings, but the national rankings.

The No. 6 Trojans (5-0, 3-0 Pac-12) host the Cougars (4-1, 1-1) at 4:30 p.m. on FOX in one of conference’s most-anticipated game of the week. USC has been solid to start the season under first-year coach Lincoln Riley and quarterback Caleb Williams, who followed Riley from Oklahoma during the offseason.

The Trojans have convincing wins over Rice, Stanford, Fresno State and Arizona State by a combined score of 194-84.

USC’s only test came in a come-from-behind 17-14 victory over Oregon State in Corvallis, Oregon. It was the only time Williams has struggled this season, completing 16 of 36 attempts for 180 yards and a touchdown – a go-ahead score with just over a minute remaining in the fourth quarter.

The Cougars are coming off a 28-9 win over California, where their offense was lethargic through three quarters and snapped into action after the Golden Bears pulled within five points early in the fourth.

The Trojans are 12-point favorites according to VegasInsider consensus.

Welcome to the land of The Wild Wild West.#GoCougs | #WAZZU pic.twitter.com/sXWdd8Ug0v

The top defenses in the country at getting after the QB💥 pic.twitter.com/wDWlgRSYcq

Quarterbacks Cameron Ward and Caleb Williams have been two of the most explosive in the Pac-12 this season, with over 1,400 yards and 12 touchdowns apiece. The main difference between the two sophomores: mistakes.

Ward has been careless with the football, forcing throws into double coverage and racking-up seven interceptions – tied for third most in the country. Williams only has one interception on the season.

The Cougars have defeated the Trojans seven times since the second world war, with a 10-61-4 all-time record and 13.3 win percentage – their worst against Pac-12 teams.

‘We’re confident in what we can do, too’: Washington State returns to national spotlight for matchup with No. 6 USC

LOS ANGELES – From a general point of view, the football programs at Washington State and Southern Cal don’t share much in common – soon, they won’t even share a conference. | Read more

Two-minute drill: Keys to victory for Washington State against USC

The pick: Why USC will beat Washington State

LOS ANGELES – According to USC’s coach, the Trojans haven’t faced a challenge like Washington State this season. | Read more

PULLMAN – Since the creation of the Associated Press college football poll in 1936, Washington State has played 78 games against opponents ranked in the AP’s top 10. | Read more

PULLMAN – Washington State’s sturdy defense will be up against a potent USC offense, a Trojans attack led by perhaps “the best play designer in the country,” Cougars coach Jake Dickert said. | Read more

During his upbringing in the heart of Los Angeles, Renard Bell lived in the shadow of the Coliseum. The veteran Washington State receiver grew up just down the road from USC’s campus and the iconic football venue he will be playing in this weekend. | Read more

What is it? Washington State (4-1, 1-1 Pac-12), coming off a smooth win over Cal, travels to Southern California hoping to pull off an upset victory against the USC Trojans (5-0, 3-0) – the front-runners in the Pac-12 and the sixth-ranked team in the nation. | Read more