The region in 2021 had its driest, and second hottest, Feb. 1 through July 10 stretch since record-keeping began in 1881, according to the National Weather Service. And the unwelcome weather isn’t letting up soon, with 100-degree days and no rain forecast this week.

While Spokanites got a brief, slight respite from extreme heat last week, the National Weather Service is predicting highs in the low 100s for Monday and Tuesday in Spokane.

“If you have to be outdoors, just take precautions,” said Travis Wilson, a meteorologist with the National Weather Service in Spokane. “Limit your exposure to the sun, take frequent breaks, drink plenty of water.”

A cold front will bring cooler temperatures Thursday and Friday, with highs expected to fall to the low 90s and high 80s. It will still be sunny, and the second half of the week will likely be windy with gusts of 25 to 35 mph.

After the brief cooldown, temperatures will climb again next week.

Wilson said 2021 has been one of the hottest, driest years in the region’s history.

The stretch from Feb. 1 through July 10 has been the second hottest Spokane has ever seen, behind only 2015 – which was the worst wildfire year in state history.

“Acres burned are mostly highly correlated to the summertime temperatures, so it’s not a good thing that we see temperatures of this magnitude,” Wilson said.

The same window in 2021 has been Spokane’s driest on record for the span.

“We only received 1.94 inches of rain, so pretty pathetic,” Wilson said. “It’s not looking good.”

According to the U.S. Drought Monitor, most of Eastern Washington is in extreme drought. A small area in the northern Cascades is one of the few places in the entire West that isn’t experiencing drought. 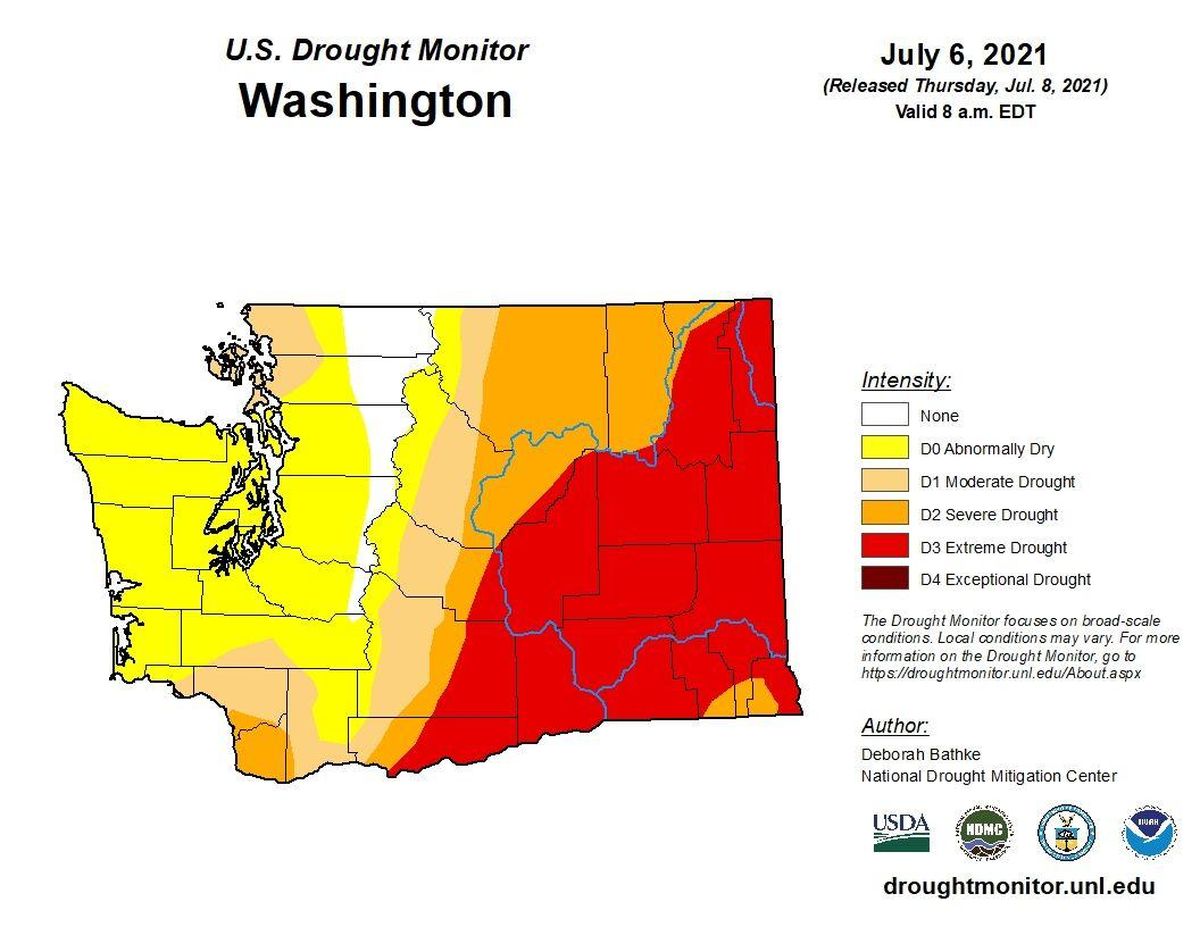 Most of Eastern Washington is in extreme drought. There’s no rain in the forecast immediate forecast and temperatures early this week are expected to eclipse the 100-degree mark. (U.S. DROUGHT MONITOR)

There isn’t any rain forecast for the next two weeks, Wilson said. In addition to causing wildfire concerns, the lack of rain this year will mean decreased yields for many Washington farmers.

Smoke from wildfires in the Blue Mountains and southern Nez Perce county will continue to degrade air quality in the Lewiston area for a few days.

A few major fires are active near Washington’s far southeast corner. The largest, the Snake River Complex Fire, has burned more than 54,000 acres in Idaho and Washington. The burn is 0% contained.

The fire is only 20 miles south of Lewiston. Land management agencies are holding a meeting about the fire at 1114 9th Ave. in Lewiston on Sunday at 7 p.m.

A handful of other fires are burning throughout the region, including the 46,325-acre Dry Gulch Fire in the Washington portion of the Umatilla National Forest, the 1,000-plus-acre Leland Complex raging east of Moscow and the 1,600-plus-acre Cougar Rock Complex 30 miles north of Orofino.

Eastern Washington air quality remains in the “good” category but is near the “moderate” threshold in some areas. Five Idaho counties have air quality alerts in effect: Latah, Nez Perce, Lewis, Clearwater and Idaho.