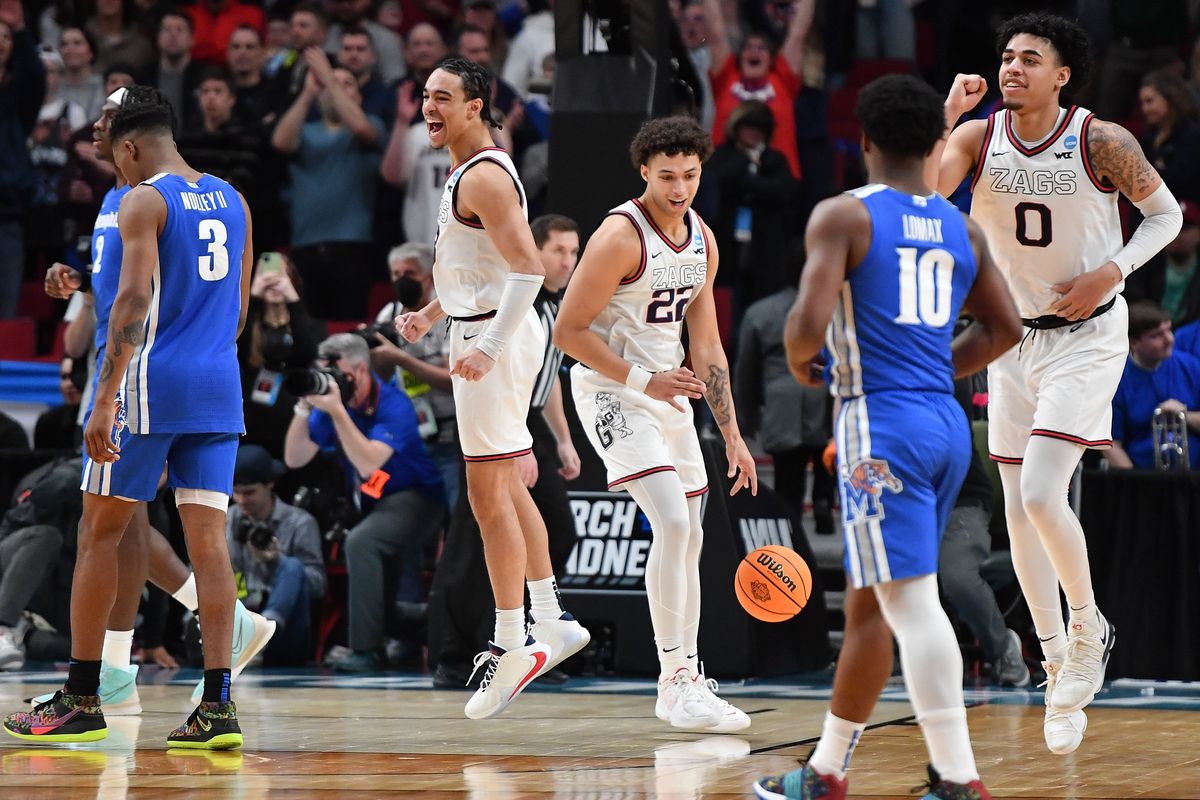 Gonzaga Bulldogs guard Andrew Nembhard (3) erupts in a a cheer as time expires and Gonzaga defeats the Memphis Tigers during the second half of the second round of the NCAA Division I Men’s Basketball Tournament on Saturday Mar 19, 2022, at the Moda Center in Portland, Ore. Gonzaga won the game 82-78. (Tyler Tjomsland/The Spokesman-Review)

Drew Timme exploded in the second half and Andrew Nembhard came up clutch time and time again, as Gonzaga beat Memphis 82-78 in Portland to reach its 7th straight Sweet 16.

Memphis led by 10 at halftime, but Timme single-handidly went on an 11-2 run to get the Bulldogs (28-3) right back in it. He finished with a team-high 25 points and 14 rebounds.

Meanwhile, Nembhard scored 23 points, shooting 5 of 10 on 3-pointers and made the final four free throws to keep the Tigers (22-11) out of reach. Rasir Bolton was the only other Zag shooting well, making 3 of 6 3-pointers and scoring 17 points.

Gonzaga struggled to keep pace with the Tigers early on and were being dominated in the post. Memphis’ bigs got in foul trouble in the second half as Timme was finding his form, which turned the momentum.

The Bulldogs advance to play No. 4 seed Arkansas in the Sweet 16 on Thursday.

PORTLAND – Turns out Drew Timme’s stellar second half against Georgia State on Thursday was just his warm-up act. | Read more

Dave Boling: Gonzaga’s win over Memphis displayed the glory of March madness and could springboard another deep tournament run

‘Don’t be soft’: Halftime messages from Gonzaga’s Few, Drew Timme come through loud and clear in 82-78 win over Memphis

Gonzaga faced three halftime deficits during the regular season. A perceptive fan should remember how those three games turned out for the Bulldogs. For those that don’t, a quick refresher. | Read more

TV Take: Gonzaga gets all it can handle from Memphis, survives to reach another Sweet 16

Every NCAA tournament, it seems, Gonzaga faces one team in an early round that the “experts” see as a real test. | Read more

15:48 - GU 8, UM 4: Bolton and Nembhard knock down a pair of 3-pointers to give the Zags an early advantage, but the focus remains on the battle in the post.

Memphis went right to Duren inside on the first possession, who was blocked by Holmgren on his first attempts, but out-muscled the Gonzaga big man after an inbound pass.

Holmgren returned the favor a few plays later with a fade-away jumper and defensive stop on the next drive.

11:35 - GU 13, UM 13: The pace is blistering as Gonzaga and Memphis race up and down the court after each change of possession.

Tigers have six offensive rebounds and generating a lot of points on second chance efforts. Nembhard leading the Zags with eight points on 2 of 4 shooting on 3-pointers.

Nembhard looks to be off to his best shooting night of the year, scoring a team high 11 points on 3 of 5 3-pointers.

Tigers tie it up against (1) Gonzaga 👀#MarchMadness pic.twitter.com/yYw99KBQuC

Few is called for a technical foul, which gives Memphis its largest lead. The Tigers are 7 of 10 on free throws while the Zags are 1 of 3, despite Memphis being called for two more fouls. Nembhard and Bolton have accounted for 17 of the Zags’ points.

MALCOLM DANDRIDGE WITH THE GROWN MAN SLAM TO GIVE @Memphis_MBB THE LEAD OVER TOP-SEEDED ZAGS 😱#MarchMadness pic.twitter.com/vF2V98Qqrb

The Zags haven’t been able to get anything going inside, as the Tigers hold a 23-17 advantage on rebounds and Holmgren and Timme have been limited to five combined points.

Memphis used its size and athleticism to build a 10 point lead over Gonzaga at halftime, dominating the paint and converting several highlight dunks in the process.

Drew Timme and Chet Holmgren accounted for just six points, as Holmgren was sidelined for half the period with two fouls. Instead, Andrew Nembhard leads with 13 points, while Rasir Bolton added six. The Zag guards slowed toward the end of the half, where Memphis took advantage.

The Tigers out-rebounded the Bulldogs 25-18. Tyler Harris came off the bench to score a team-high 11 points, while NBA prospect Jalen Duren sat in foul trouble.

Gonzaga has lost all three times it trailed at half this season.

The Gonzaga forward completely turns his performance around from the first half single-handidly going on an 11-2 run to erase the Tigers’ lead.

In a blink of an eye Timme is up to a team-high 15 points.

11-2 Gonzaga run with all 11 from Timme 🔥pic.twitter.com/M1XOLFw5ei

Elsewhere Arkansas advanced past New Mexico and will play the winner of Gonzaga-Memphis in the Sweet 16.

Arkansas takes down NMSU 53-48 and is on to the 2nd weekend!#MarchMadness pic.twitter.com/Dn2wWiU4FR

The Tigers have 17 fouls to Gonzagas’ 8, which will likely factor into the final 10 minutes, as Williams and Duren both have four.

It’s been all Timme out of the locker room, who is now up to 22 points on 9 of 13 shooting. Meanwhile, Memphis is running out of posts’ with its two starters in foul trouble and Dandridge, who’s put in a crucial effort off the bench, is gassed after played 19 minutes.

ZAGS TIE IT UP AFTER BEING DOWN 12! 😱@ZagMBB #MarchMadness pic.twitter.com/dMNSjZYr9w

Tigers haven’t been able to stop the Zags’ offense, who now could lock up a 7th-straight trip to the Sweet 16 with a few more successful possessions.

Timme to Chet is a TOUGH combo to stop 🔥 @ZagMBB #MarchMadness pic.twitter.com/4qHJS4Git3

The Bulldogs are 9 of 20 from the free throw line.

6.1 - GU 80, UM 78: Memphis makes a pair of free throws and the Zags will inbound from under the basket, while the Tigers look for a turnover or quick foul.

Top-seeded Gonzaga is looking to advance to the Sweet 16 for the 7th straight season. In its way is No. 9 seed Memphis, led by former NBA All-Star Penny Hardaway, seeking a return to prominence.

Gonzaga is coming off a 93-72 win over No. 16 seed Georgia State, where the Zags struggled for the opening 30 minutes, before breaking away with a 20 point run.

Memphis beat No. 8 seed Boise State – led by former Gonzaga assistant Leon Rice – in the first round 64-53. The Tigers never trailed and took a commanding 38-19 lead into halftime, before fending off the Broncos in the second half.

Plenty of NBA scouts will be in attendance to watch the matchup between Chet Holmgren and Jalen Duren in the post. Both players are projected to be top 10 picks in the 2022 NBA Draft.

The winner of tonight’s game will play the winner of No. 4 seed Arkansas and No. 12 seed New Mexico State in the Sweet 16 next Thursday.

Drew Timme and Chet Holmgren get loose ahead of this Round of 32 game. #Gonzaga frontcourt duo combined for 51 pts. and 30 reb. on Thursday. Will be a huge test against #Memphis and Jalen Duren. pic.twitter.com/SyuBWyJ1cv

Mark Few knows his team will have their hands full with the size, skill and athleticism of Memphis’ frontcourt.

Incredible play on the “Zags got Dudes” motto that’s caught on in recent years. https://t.co/citocmWfRQ 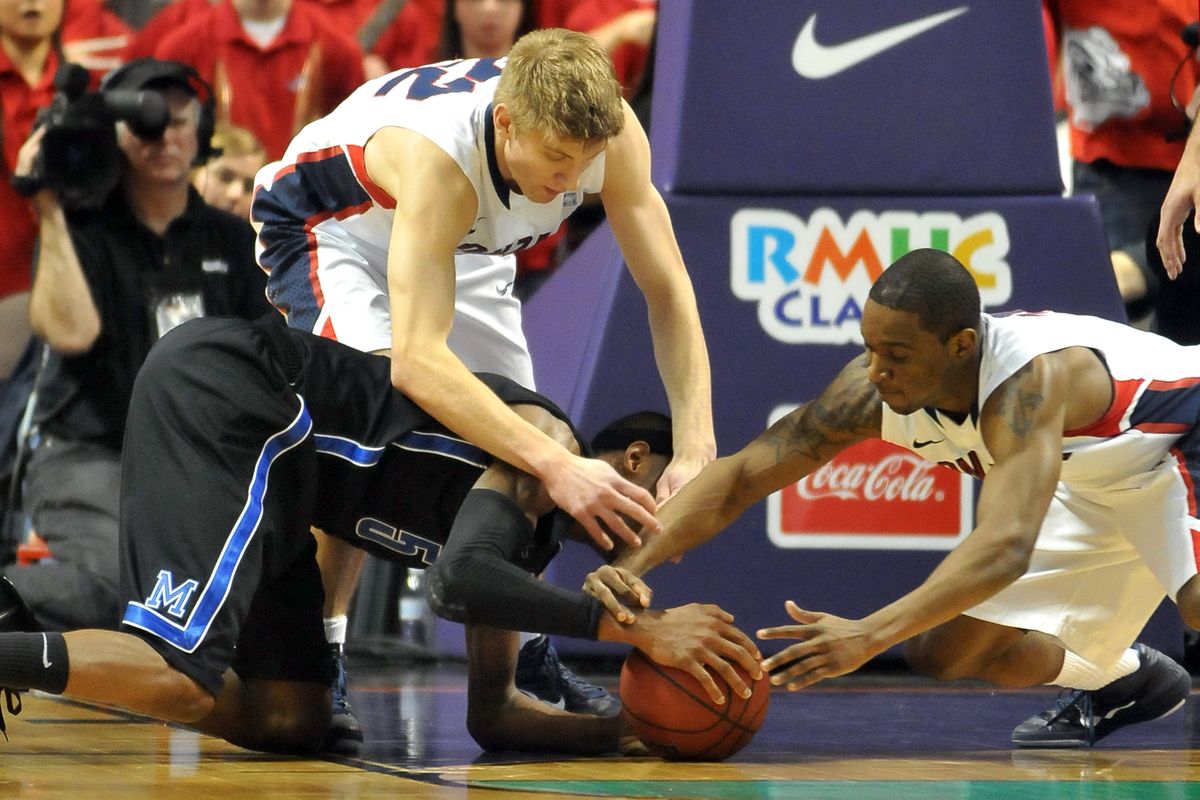 Gonzaga’s Mathis Monninghoff, above, and Demetri Goodson, right, dive into to take the ball from Memphis’ Will Barton, left, who helped the Tigers past the Bulldogs, 62-58, on Saturday, Feb. 5, 2011, at the Spokane Arena. (Jesse Tinsley / The Spokesman-Review)

The two teams have never met in the NCAA Tournament. The Tigers have appeared in the tournament 26 times with an overall record of 35-26, though its wins from 1982-86 & 2008 have been vacated by the NCAA.

Mark Few frequently points out that one of the hardest feats in sports is getting back on track when a player or team hits a rough patch. Few cited an example of each after the top-ranked Zags pulled away from Georgia State on Thursday. GU center Drew Timme rebounded from a sluggish first half with 22 second-half points. And Gonzaga’s next opponent – young, but highly talented Memphis – as a prime example of a team that has weathered low points to emerge as a formidable obstacle in the Zags’ attempt to reach the Sweet 16 in the seventh straight NCAA Tournament when the teams square off at 6:40 p.m. Saturday at the Moda Center. | Read more

It should be a March Madness feast for NBA scouts and college basketball fans. It should also have a lot to do with the outcome when Gonzaga faces Memphis on Saturday. At the highest levels of prep and summer basketball, the best players see quite a bit of each other at various all-star games, camps, showcase prep events and top AAU tournaments. Therefore, GU’s Chet Holmgren and Memphis teammates Jalen Duren and Emoni Bates won’t require pre-game introductions. | Read more

Dave Boling: While the analytics rank Gonzaga No. 1, Mark Few grades his guys on things that can’t be measured

Class of 2023 five-star prospect Jared McCain commits to Duke over Gonzaga, others

Duke edged Gonzaga on the court when the college basketball heavyweights met in Las Vegas the day after Thanksgiving and the Blue Devils notched another victory over the Bulldogs on Friday – this time for a coveted recruit in the class of 2023. | Read more

PORTLAND – Drew Timme and Chet Holmgren supplied many of the highlights during Gonzaga’s 93-72 victory over Georgia State. | Read more

PORTLAND – Usually sporting a Sony 4K camcorder, Dave Holmgren had built up a cult following for his old-school antics while following his son Chet on his basketball journey. | Read more