A GRIP ON SPORTS • Usually Friday morning are reserved for looking ahead to the weekend. We will do a little of that. But our main focus today has to be on a problem plaguing college hoops right now. Yep, we need to address the elephant in the arena.

• And, no, we aren’t referring to the fact games are being played in the middle of a pandemic. That’s been analyzed to death, both pro and con, and it’s not changing. Nor are we referring to the odd way most coaches wear their masks, sporting a look Cartman calls a “chin diaper.”

Instead we want to discuss the propensity of college basketball officials, almost all of them during the multitude of games we’ve watched, to default to offensive fouls whenever a defensive player hits the floor. It’s gotten out of hand.

We watched two games in their entirety last night. And in both Gonzaga’s win over Pacific and Washington State’s win at Oregon, the charge/block call helped determine the tenor of the contest. In the Cougar game, one Noah Wiliams picked up late, may have decided the outcome.

Almost every one of the 50/50 calls, whether they be near the restricted arc, on the perimeter or, seemingly, getting off the bus, results in the official putting his hand behind his head and pointing toward the defense’s basket. Even when, as happened last night in the GU game, the defender is still moving and hasn’t establish legal guarding position before the offensive player leaves the floor.

Three calls in that game come to mind. Two were whistled against Gonzaga offensive players and one, the most egregious, against a Tiger. As Jim Spanarkel, analyzing the game for the CBS Sports Network, pointed out during replays of the first two, the calls were probably justified under the rule as now written. The last one, which triggered a technical-earning tirade from Pacific coach Damon Stoudamire, was just a miss, as Drew Timme never established his position, though he did hit the court with an impressive thud. And therein lies the problem.

Once a tone is set, as long as the offensive player makes any type of contact, no matter how softly, and the defender acts as if he (or she, as the problem occurs in the women’s game as well) was hit by a speeding motorist, the offensive foul is called. It happened in the Zag game more than once and happened to Isaac Bonton (and others) in the Cougar game as well.

It’s destroying the flow of the games. It is also subverting the restricted arc rule, which the NCAA put into place in 2010 in the name of player safety. The offensive player’s safety, actually. But it doesn’t seem to be working. The contact, and the flopping, just seems to be occurring outside the 4-foot arc.

It’s hard to understand why the call has evolved recently into less of a coin flip and more of an offensive-foul bent. Every national analyst we listen to rails about the rule and maybe that’s the point. Maybe it’s so hard for anyone to understand, and enforce, there is an unspoken decision by the referees to just default one way in hopes of getting the rule changed.

Whatever the cause, it’s something the NCAA will need to address in the offseason. Heck, it might even want to issue a directive or clarification before the tournament. After all, it would be awful to see the national title hinge on a controversial contact play around the hoop.

By the way, one aspect of the restricted arc rule that seems to be missed often is it applies only to a secondary defender, which is defined as a player “who has helped a primary defender after that player has been beaten by an opponent because he/she failed to establish or maintain a guarding position,” among other criteria. That part of the rule seems to get lost at times when officials point to the floor to emphasis the contact occurred within the restricted area.

The rule explicitly states there is no secondary defender after an offensive rebound if the rebounder makes an immediate move to the basket, an exception that was ignored at one point in last night’s Gonzaga game.

• Is there anything worth watching this weekend? Besides the Puppy Bowl, I mean? (And is there going to be another Puppy Bowl?)

The Super Bowl should be interesting, as interesting as the game usually is these days. But there is also more to watch, including a huge college basketball game Saturday night, as UC Irvine hosts Cal State Bakersfield on ESPNU.

Wait, not everyone follows the Anteaters? For shame.

Well then, the Cougars are playing at Oregon State on Saturday afternoon in game that will be broadcast by the Pac-12 Networks, so you may not be able to see it. The same can be said about Idaho’s visit to Eastern Washington, as the noon start is an SWX production. If you live outside the Inland Northwest, its streaming or nothing.

There is also NHL, NBA and PGA action all weekend, with the golfers in Phoenix for what usually is the most raucous event on Tour, though this year’s Waste Management has been muted a bit by pandemic limits on attendance.

Just about every sporting event Sunday occurs before the Super Bowl’s 3:30 p.m. PST kickoff time, though there is an exception.

Stanford and California will meet on FS1 starting at 7:30, which may or may not be in conflict with the football game. In the Pac-12 they call that counter (intuitive) programming. 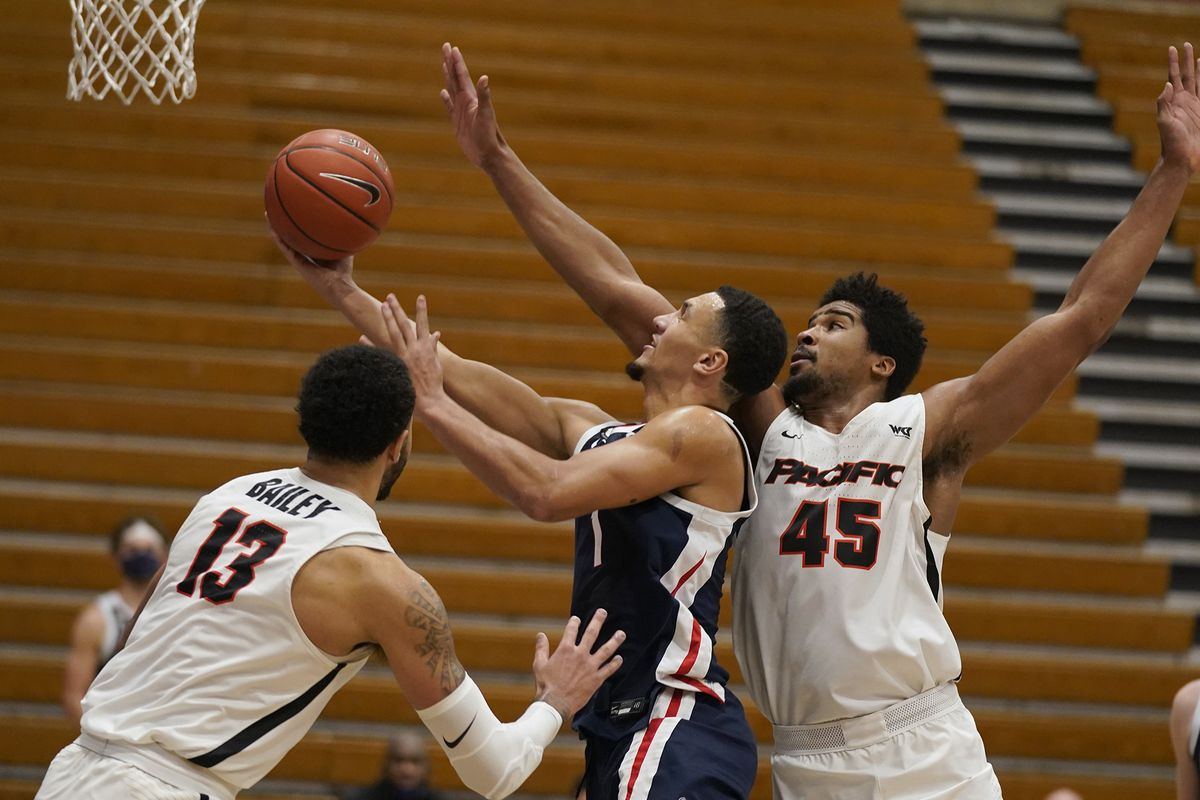 Gonzaga: The Zags slogged through their re-scheduled appearance in Stockton last night, pulling away late for the 18-point win. Jim Meehan took care of the game coverage, including the analysis and the difference makers. … There is also a recap with highlights to pass along. … Oh, and my TV Take. … Jim has a story on two GU recruiting targets earning a high school honor. It’s weird, though. The 10 semifinalists for the Naismith Trophy High School Player of the Year award includes O’Dea High’s Paolo Banchero, who has yet to play a minute of high school basketball in 2021 and will not play before the award is announced in April. … What Gonzaga and Baylor are doing is historic. … Elsewhere in the WCC, Portland’s disappointing conference season continued with a loss to BYU. … The Zags game against the Cougars is Monday night, a change that seemed to have riled up the BYU faithful. 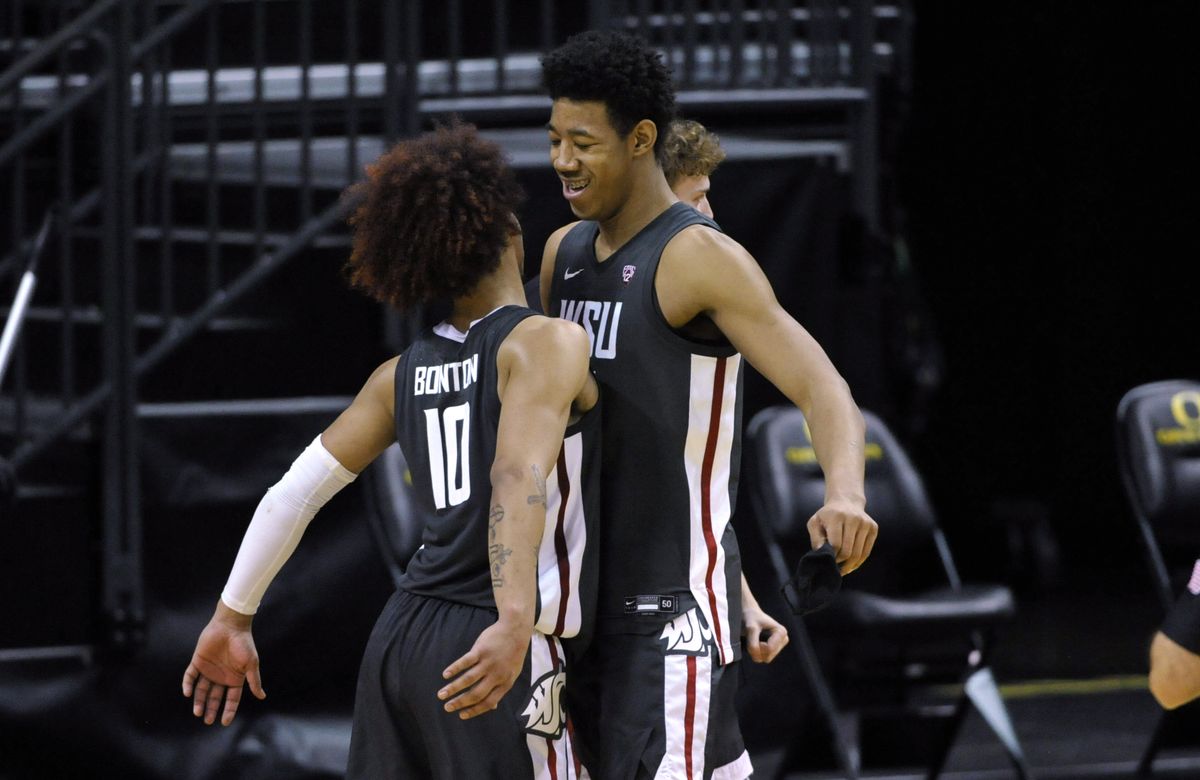 WSU: Bonton was not recruited by Oregon or Oregon State and he’s helped ensure coach Kyle Smith has yet to lose to either school in his home state. His 25 points last night, including some key ones down the stretch, were the difference. Theo Lawson has the game story. … The volleyball team rallied for a five-set win over No. 18 UCLA in Pullman. … Klay Thompson may not be playing due to injury, but he certainly is staying in the spotlight. … Around the Pac-12 and college basketball, Washington struggled again, losing this time at Oregon State. The Beavers have been playing better. … The Matthew Knight Arena floor seemed slippery last night but that didn’t seem to be the reason there were injuries. … Utah proved too slippery for Arizona to guard as the Utes ran away from the Wildcats in Salt Lake City. … Stanford defeated California last night, but that’s not the school’s biggest piece of news. It seems the Cardinal administration handed out bonuses while cutting sports. That’s not going over well. … Drake London isn’t playing hoops for USC anymore. … In football news, Oregon State received a $50 million anonymous gift toward its Reser Stadium remodeling project. That’s a number it doesn’t seem many schools can match, especially not Washington State. … Everyone always trumpets their recruiting classes. But not all of them are the same. … David Shaw thinks his Stanford class was underrated by the services. … California, however, likes its rankings. … So does Oregon. But what will next year be like? … Jedd Fisch’s first Arizona recruiting class also includes a lot of transfers. I wonder if anyone will rank transfer classes this season. … Colorado has picked up a Notre Dame transfer. … There has been comings and goings among Utah’s wide receiving corps. … Does Arizona State have the easiest schedule in the Pac-12 next season? … Finally, former UW athletic director Mike Lude is still going strong at age 98. A life goal for me, for sure. 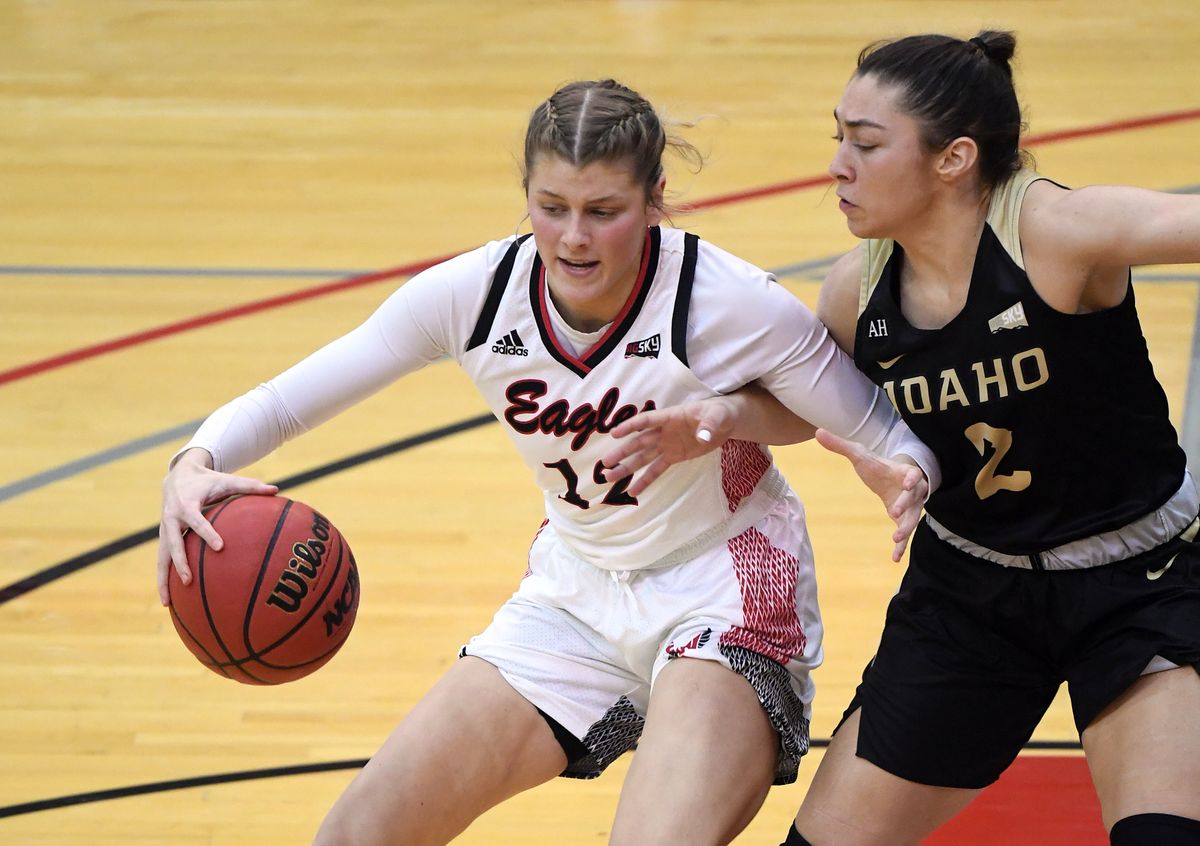 EWU: The Eastern women rallied at home but still lost to Idaho. Ryan Collingwood has the story. … Colin Mulvany was in Cheney and has this photo gallery. (By the way, I had the wrong site for the women’s game in yesterday’s column. Sorry.) … Ryan also spoke with Larry Weir yesterday for the latest Press Box podcast. … Elsewhere in the Big Sky, Montana State scored enough points to stay undefeated in conference play, but its defense didn’t get the job done as Weber State won 96-88. … Montana had to go to overtime to get past Portland State. … In football news, Weber State lost an assistant coach to the NFL.

Idaho: The Vandal men got close in the second half but were unable to deny EWU the victory in Moscow. Peter Harriman has the story.

Whitworth: The athletic department was expecting a series of contests this weekend. COVID-19 had other plans. Dan Thompson has this story explaining how the Pirates’ programs are on pause.

Seahawks: Did the Hawk offense become passive last season? Russell Wilson believes so. … Seattle gave Frank Clark a second chance. He’s made the most of it.

Mariners: Kyle Lewis isn’t going to rest on his laurels.

• Is there a harder call in any sport than the block/charge one in hoops? Not that I can think of. Almost all of them are so close. It’s nearly impossible to get them all correct, so maybe we should all just be satisfied there is some semblance of consistency in college basketball these days. Until later …