• Most sports columnists will tell you they only want to write about teams that are really good or really bad. The in-between ones are boring. Most sports columnists have a too-easy life. Try being a beat writer, the guy who covers a team on a day-to-day basis, when the team you cover is really good or really bad. There is a sameness to every competition, which is why last night’s local college basketball games were refreshing to watch.

Take Gonzaga for instance. The last month, poor Jim Meehan has watched at least a dozen games in which the Bulldogs kick it up a gear, either right from the start or some time in the first half, and the rest of the game is just about determining the final score. 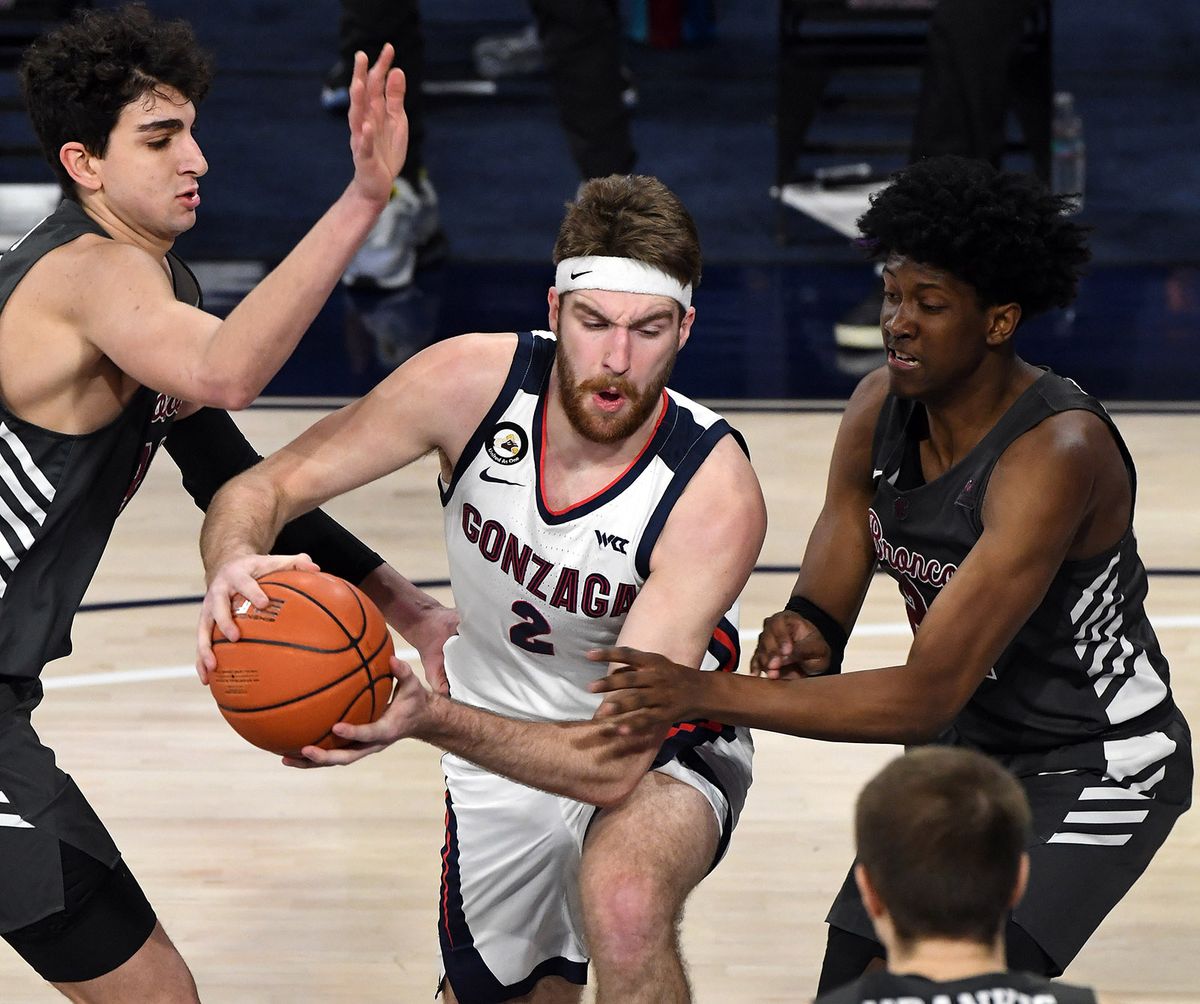 The names may change – one day it’s Drew Timme leading the way, the next it’s Joel Ayayi – but the bottom line is the bottom line. The Zags win handily.

It reminds us of the 2008 Washington State football season, albeit from an upside-down perspective. The Cougars were 2-11 in Paul Wulff’s first season, which is bad enough. But 11 of those games were so similar as to be redundant. In those games, WSU lost by at least 25 points – mostly a lot more but that is another story – or, in the case of Portland State, won by that margin. Even worse, though, the outcome seemed predetermined before the opening kickoff.

Only the Apple Cup, with Washington entering the game without a win and leaving it the same way, and the final weekend in Hawaii, when WSU fell behind by two touchdowns in the first quarter and lost by that margin, were even debatable.

Honestly, we felt as if we were writing the same story over and over, Bill Murray-like. There was a shadow over the program and it only lifted for a few days in November.

Meehan has to deal with that in reverse. Well, he did. Until last night.

• Ten years ago next month we were in New York City. Ken Bone’s best Washington State team (by record) was there as well, set to play in the NIT semifinals against Wichita State. With future NBA All-Star Klay Thompson on the roster, the Cougars rarely had trouble scoring. Until they played the Shockers. 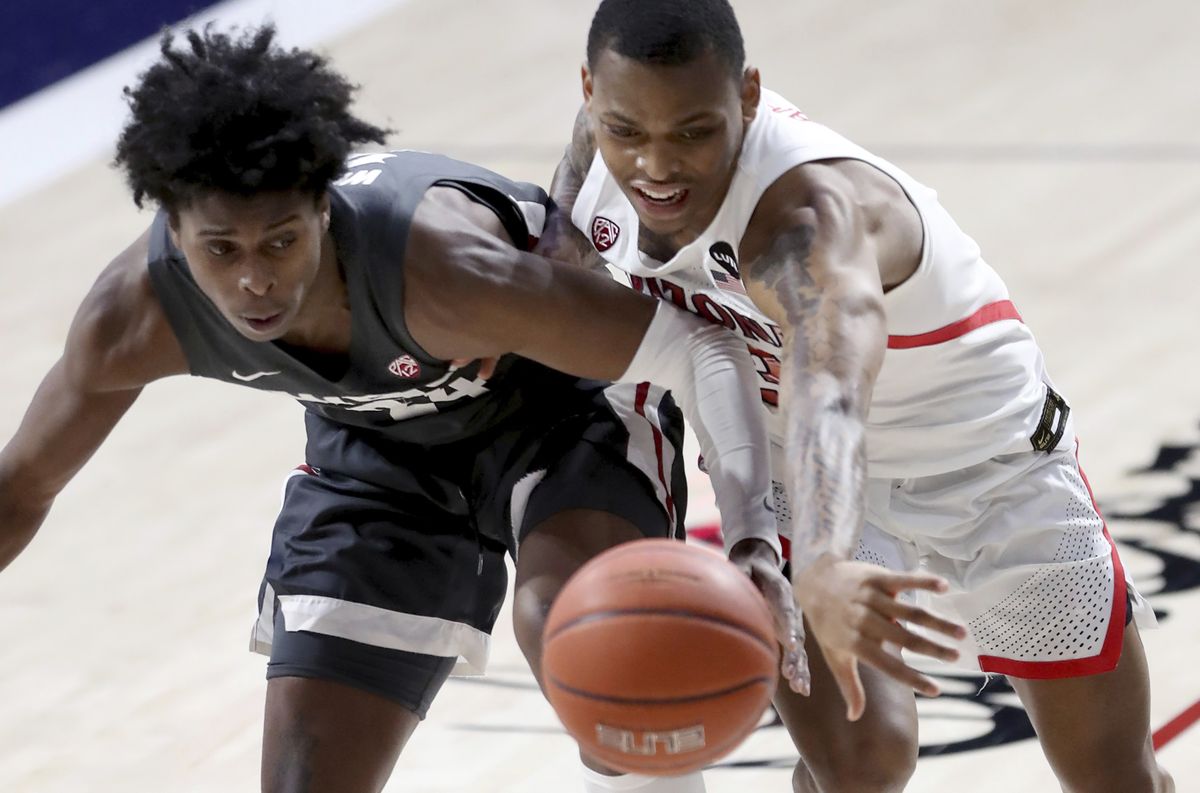 From the opening tip in the near-empty Madison Square Garden, Wichita State ripped their heart out with tough, hard-nosed defense, the likes of which had thrilled the Washington State fans just a few years before. The Cougars were not only unable to solve the puzzle, they finally just kicked over the table and left. Nothing was falling – Thompson was 1-of-10 from the floor in his last Cougar game – and they just gave up. Washington State shot 29.4 percent from the floor with no one reaching double figures in a 75-44 loss.

To its credit, Kyle Smith’s team did not quit last night. The Cougars played hard throughout their 69-53 loss in Tucson. It was just one of those nights. They shot 31.7 percent from the floor, though their leading scorers, Noah Williams and Isaac Bonton, combined to finish 3-of-20 and had 11 points together. The Wildcats were tough, physical and unbending.

Of such things are flashbacks born. 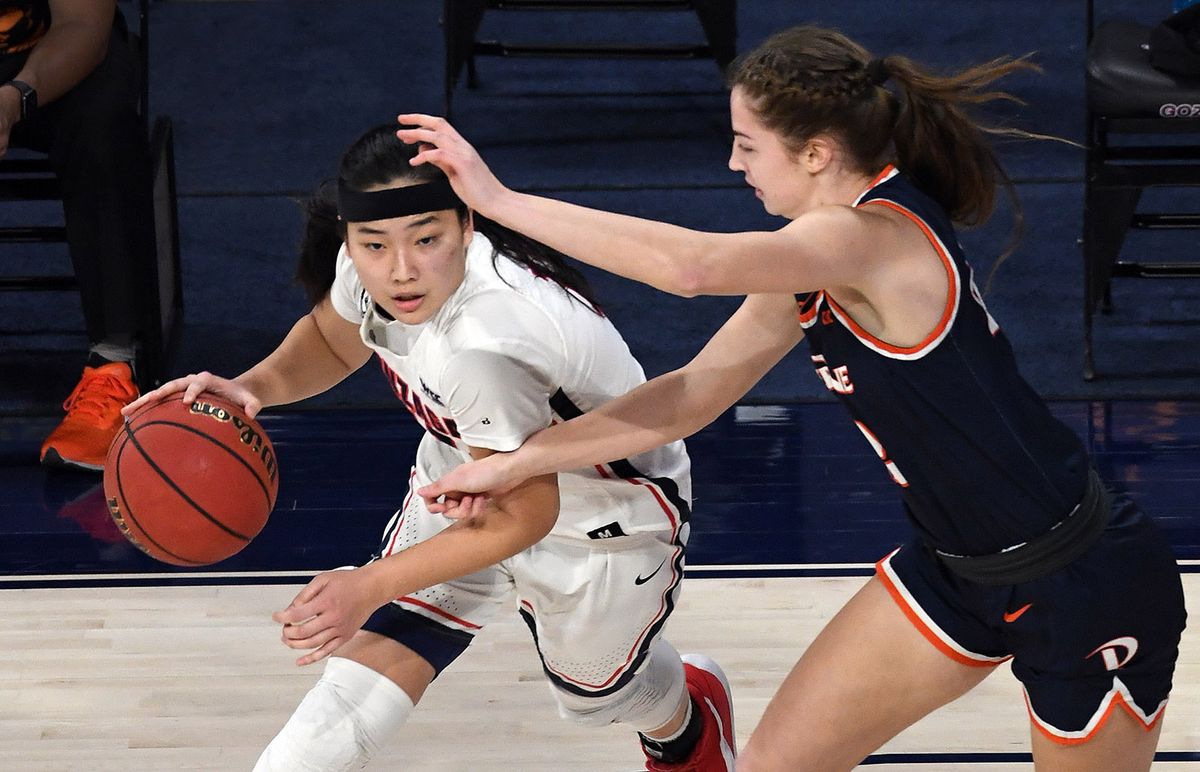 Gonzaga: Jim explained what happened in McCarthey with his game analysis and the difference makers. … Colin Mulvany takes you into the building with his camera and offers this photo gallery. … We also can pass along a recap with highlights. … We watched on television and put together our TV Take. … Jim also has a story on Timme being named a Karl Malone Award finalist, making GU the first program ever to have four finalists in the five major Naismith awards. … If you stayed up later, you may have had a chance to watch the Gonzaga women overpower Pepperdine, winning 95-49. Jim Allen has the game story. … Colin stuck around and put together another photo gallery. … Larry Weir talked with Alyssa Charlston about Gonzaga and the WSU women in the latest Press Box podcast. … The NCAA announced its contingency plans in case the virus invades its Indiana bubble. … Elsewhere in the WCC, Portland’s season is probably over, as the Pilots reported a COVID-19 case and paused yesterday. They will finish winless if it is actually over. … Saint Mary’s shut down Pacific in Moraga. … BYU had to rally, but rally it did against USF in front of fans in Provo. 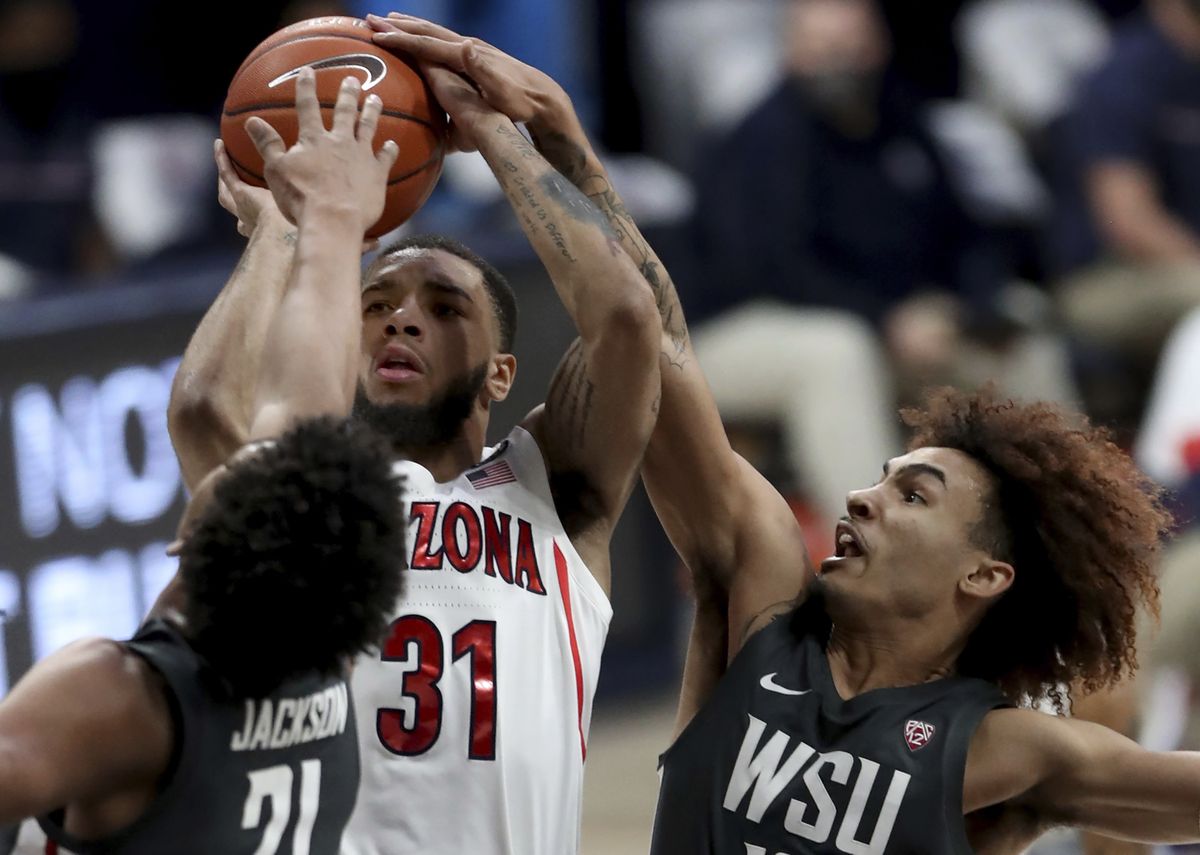 WSU: Theo Lawson has his game story on the Cougars’ defeat against the defensive-minded Wildcats. Arizona is almost finished with its season. … We missed this yesterday but Theo had a preview. It didn’t pan out as he thought. … The baseball team rallied for a 6-3 win at Dixie State in Utah. … Before we get to links around the West, S-R columnist Sean Vestal this morning dove into the muddy waters of college athletics and its funding. He focused on Washington State and Eastern Washington, two schools with athletic departments dealing with deficits and faculty groups who want answers. Instead of jumping in ourselves, we are just going to link a recent statement from the University of California, Berkeley chancellor Carol T. Christ, explaining why one of the top academic institutions in the nation in the past few years has covered its athletic department debt to the tune of around $100 million dollars. Jon Wilner used that statement to look at Cal’s debt issues and how it is dealing with them. … Around the Pac-12 and college basketball, Washington got closer in its second consecutive game against Arizona State, but it still lost. … Stanford played without its best player and Oregon took advantage, winning 71-68 on the road. … Oregon State started slowly, never hit a 3-pointer and still won 59-57 at woeful California. … USC is no longer atop the Pac-12 standings. Colorado took care of that with a relatively easy 80-62 win in Boulder. … UCLA is back in the top spot after handling Utah with ease, 76-61 in Salt Lake City. … In football news, Jedd Fisch can handle Twitter. Can the new Arizona coach handle Arizona State? 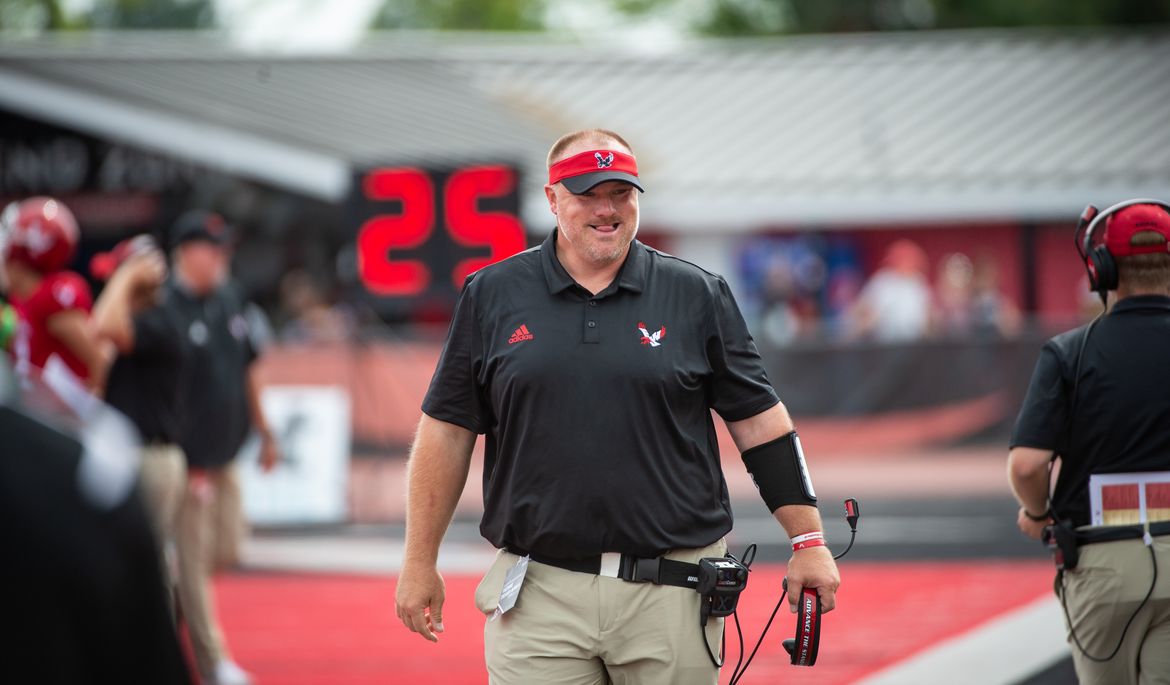 EWU: There is good news and bad news out of Cheney. The good news is Eric Barriere is ready to lead the Eagles in their spring football season, which begins Saturday in Moscow. Ryan Collingwood has this feature on the senior quarterback. … The bad news? Aaron Best will not be in the Kibbie Dome. The Eastern coach tested positive and will be in quarantine. … Elsewhere in the Big Sky, Cal Poly’s COVID-19 woes have forced a second postponement. The game with Weber State will be played in April. The Wildcats face Idaho State this weekend. … In basketball, Montana handed Idaho State a home loss, 64-58. … Weber State stayed in the race with an 82-73 win at Sacramento State. … Northern Colorado scored late to edge Portland State.

Idaho: The women’s basketball series with Montana State this weekend is off due to COVID-19 issues within the Vandal program.

Preps: Dave Nichols has a roundup that includes GSL volleyball, area football and Idaho basketball. … It is never easy to be a high school student. And it is even tougher these days. John Canzano writes about a Portland football player who could not get through it. 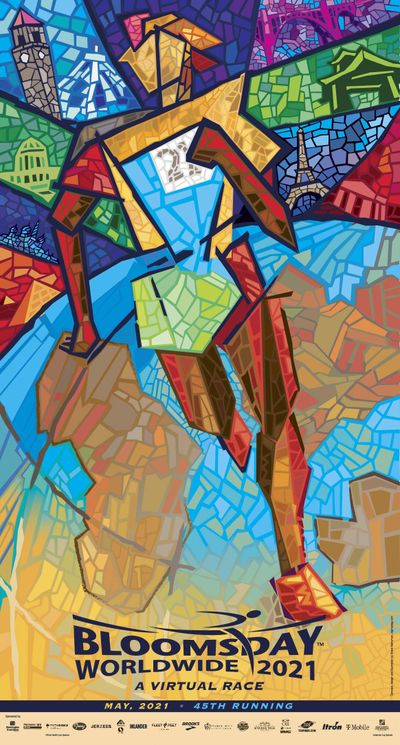 Bloomsday: The race may be virtual again this year, but the poster isn’t. Maggie Quinlan has this story on its unveiling.

Seahawks: What a quagmire. The money hanging around Russell Wilson’s neck makes it almost impossible for the Hawks to deal him. And yet he seems to either want a trade, a change in coaching philosophy or, maybe a new coach. Or maybe he wants to be back but with control. Whatever the end game, it’s ugly right now. And it’s hard to put into words how ugly. … We linked this Athletic piece yesterday looking at how we got here, but we thought we would link it again.

• Hopefully nothing will happen today. We’re not feeling our best and would love to spend a day sleeping, reading and otherwise just being as lazy as a turnip. Turnips are lazy, aren’t they? Until later …