A GRIP ON SPORTS • It’s not just the name on the other jersey. It’s the players within them. That’s a lesson Gonzaga fans should take from the Zags’ latest home win.

• Kent State? It’s breather time. Who could blame Bulldog fans thinking that heading into Monday night’s game with the Golden Flashes? After all, Gonzaga has faced Michigan State, Texas, Kentucky, Purdue and Baylor already this season. That’s a Murderer’s Row of basketball excellence over the years. 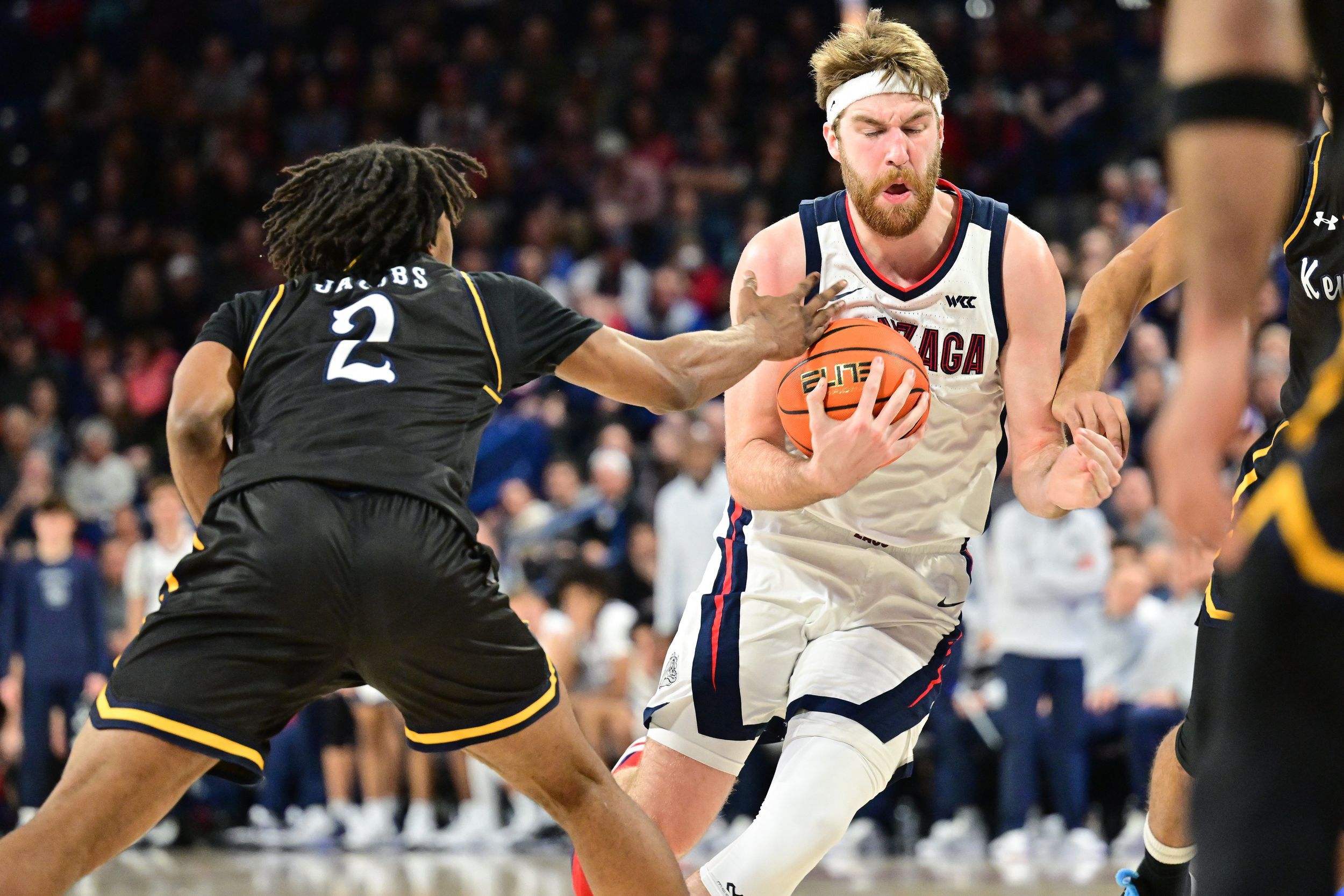 At least in name.

Kent State? Isn’t that where that awful thing happened in the ‘70s? Yes, it is. But, unbeknownst to many uncommitted to delving deeply into college hoops, coach Rob Senderoff has put together an excellent team in Ohio. Sincere Carry. Malique Jacobs. Miryne Thomas. These guys can play. And they showed it, despite running up against quite possibly GU’s best defensive effort of the season.

How excellent is Kent State? Let’s take last night’s 73-66 Gonzaga win out of it, a game the Zags didn’t put away until they ended it on an 11-0 run. Let’s look back a bit. The Golden Flashes have already played a West Coast Conference darkhorse, Portland, and won by 12. That tells you they are solid.

But it was their late November game in Houston that tells you they are capable of upsetting the nation’s best. No, really. Kent State went into the Fertitta Center and led No. 1 Houston 44-43 with less than a minute left.

That Kelvin Sampson’s Cougars rallied to win 49-44 is immaterial to our point here. What matters is, against a team that puts as much pressure on you as anyone in America, the Golden Flashes held strong for 39 minutes.

Against Gonzaga, they “only” held up for 37. It was the last three that cost them a chance at an upset.

That and their inability to deal with Drew Timme.

The senior post did what All-Americans are supposed to do. And more. His 27 points is, if not expected, easily conceivable, especially against a team without a dominating big. But his 17 rebounds? That’s Hulk-like work from a guy who looks a bit more like Bruce Banner. And then there was his key blocked shot in the final minutes, erasing a defensive mistake out front and keeping the Golden Flashes at bay.

This was a big win for Gonzaga, make no mistake about it. Not only did it keep its home win streak alive – it is a nation-best 69 games heading into Friday’s visit from 7-2 Washington – it also will pay dividends come March. How? The NCAA released its first NET rankings Monday and Gonzaga was listed at 29th. Kent State? Twenty-fourth.

In other words, according to the people who pick the tournament field, the Zags picked up something of an upset in McCarthey. Ya, right. Still, don’t ever be fooled by the name on the front of the jersey. Sometimes you have to look at those on the back.

• When Kelly Olynyk’s name was on the back of his jersey as a freshman or sophomore, how many Gonzaga followers would have told you his number 13 would be up in the rafters someday? 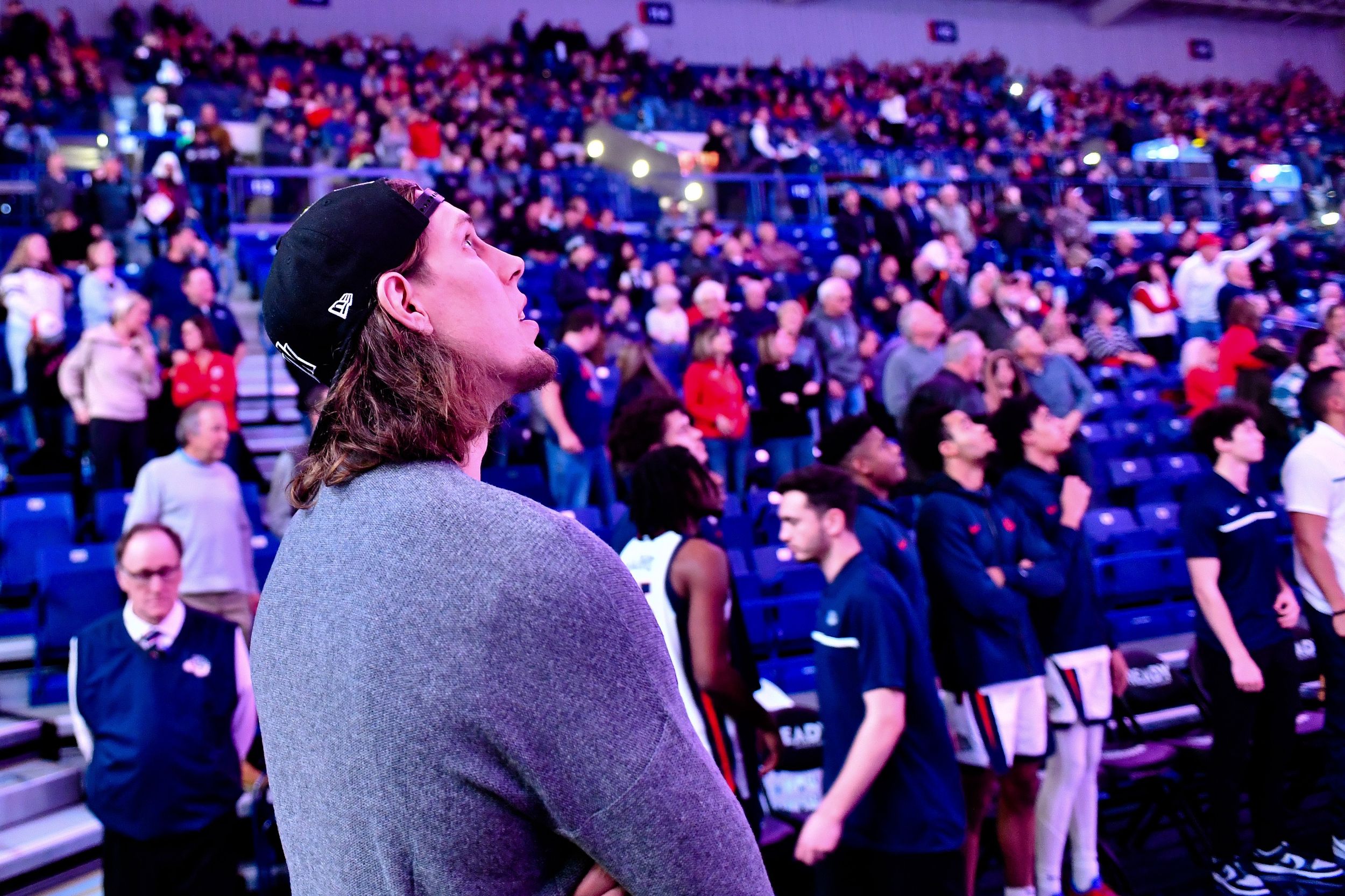 Don’t lie. No one. Certainly not Mark Few.

Until Olynyk decided to take a year off from playing games and rebuild himself into a basketball machine.

“He just invested in himself and the growth was just incredible,” is how Few described it last night as Gonzaga placed Olynyk’s number among those of John Stockton, Adam Morrison and Frank Burgess.

His redshirt junior season was among Gonzaga’s best, as he averaged 17.8 points and 7.3 rebounds in 2012-13, earning All-American honors.

Now a 10-year NBA veteran, the kid from Kamloops, British Columbia is still a walking billboard for the Zag program’s ability to develop players. And now he’s also officially recognized as one of GU’s greats. 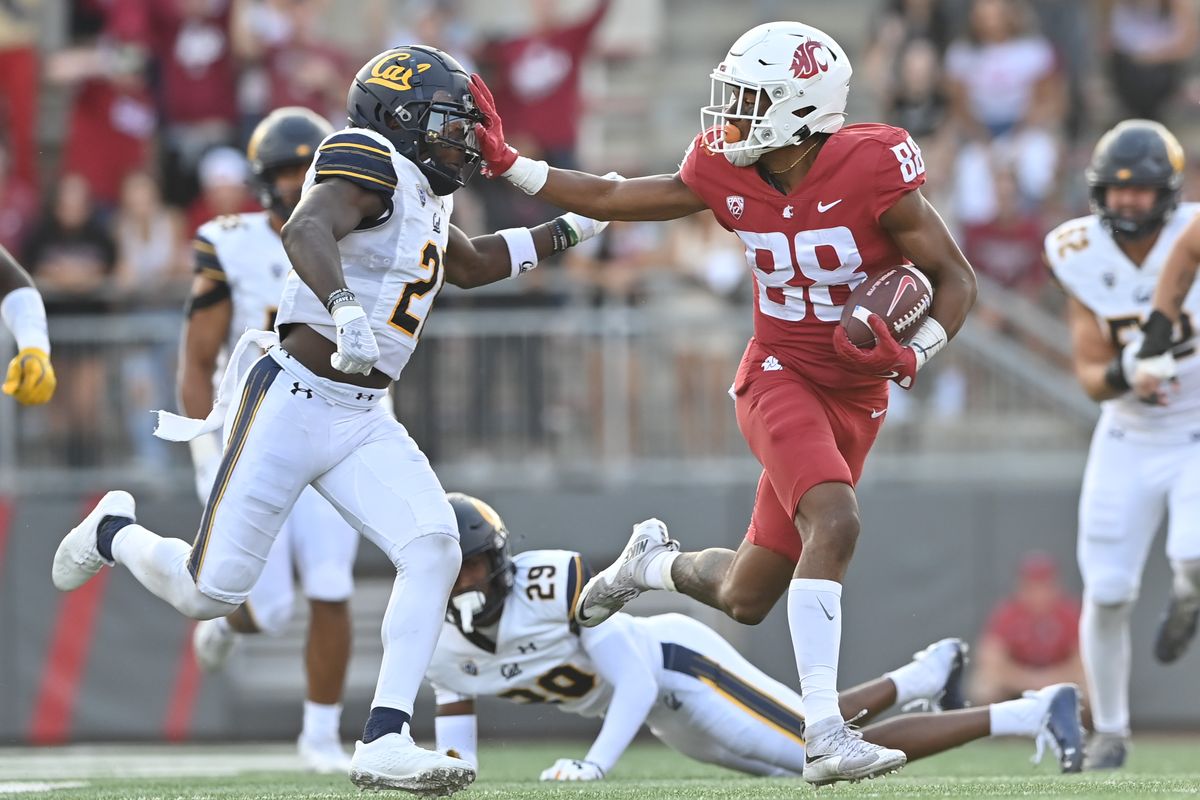 WSU: Should we wait until the madness is over? Or should we delve into every player from Pullman who is entering the transfer portal? And every player emerging from it, headed to Washington State? We’re more inclined toward the first, but poor Colton Clark doesn’t have that option. He has story after story of Cougar players putting their name into the big hat and hoping someone better will pull it out. The biggest names yesterday? Receivers De’Zhaun Stribling and Donovan Ollie. For some reason it seems necessary to leave before the season is over. Oh, well. … The S-R has an actual tracker for all the movement. … A few WSU volleyball players earned All-Pac-12 honors. That news leads off the S-R’s latest local briefs column. … Elsewhere in the Pac-12 and college football, Jon Wilner delves into the transfer portal scrum. … Michael Penix Jr.’s return makes everything seems possible for Washington. … Penix wasn’t one of the four Heisman Trophy finalists, despite having some of the best numbers of any quarterback. However, USC’s Caleb Williams is and is also considered the frontrunner for the award. … Oregon’s best linebacker is leaving, Arizona’s best receiver is too. A lot of Arizona State players. It’s a crazy time. … Especially crazy in Colorado, where Deion Sanders is telling a bunch of players to get out. … Oregon has settled on a new offensive coordinator. … The Raiders need the field early Sunday so Oregon State will have an early Saturday start for the Las Vegas bowl against Florida in a couple weeks. … Utah fans are just trying to figure out how to buy Rose Bowl tickets again. If this was a couple years down the road, the Utes would be prepping for the playoffs. … The Big Ten is good for UCLA’s financials but not its athletes. … In basketball news, Oregon State is trying to put the pieces together. … Same with Colorado. … The sky is not falling in Arizona, though its poll standing is. 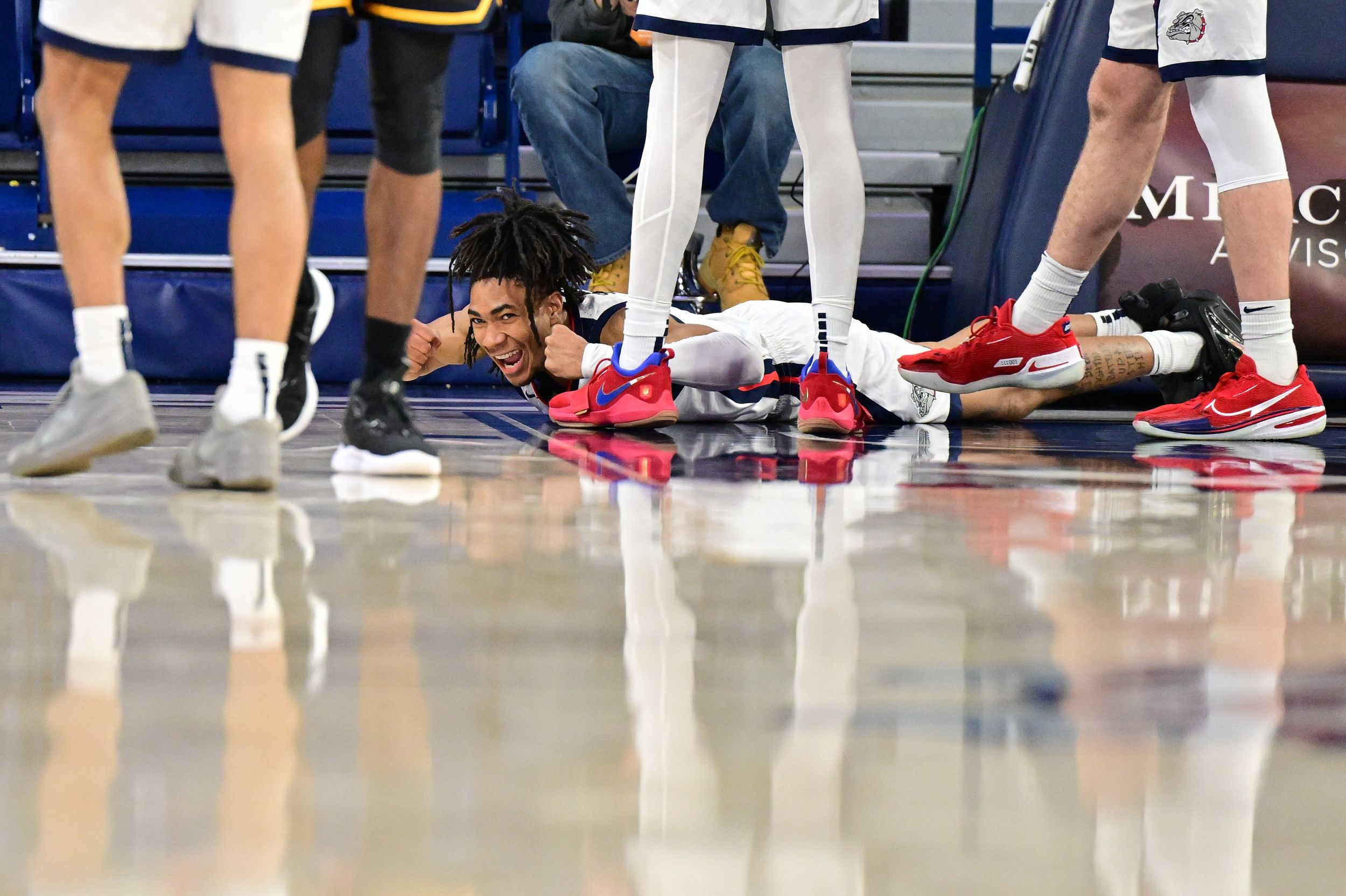 Gonzaga: Jim Meehan covered the game itself last night. … Theo Lawson has the story of Olynyk’s honor as well as the difference makers. … Tyler Tjomsland put together photo galleries of Olynyk’s ceremony and of the game itself. … The folks in the office created this recap with highlights. … Theo returns with his story on the Associated Press poll. … Jim Allen has two stories on the women, the first a preview of tonight’s home game against Queens University and the other on them moving up in the A.P. poll despite a loss to No. 2 Stanford. … Elsewhere in the WCC, Portland inexplicably lost a home game to North Dakota State. … BYU has yet to learn how to win.

EWU and Idaho: Around the Big Sky Conference in football, Cal Poly is looking for a new head coach now that Beau Baldwin has moved on. … Next up for Montana State? William & Mary. … In basketball news, Montana faces another tough test. This one is at home.

Preps: Dave Nichols has a notebook/roundup of high school news and events. 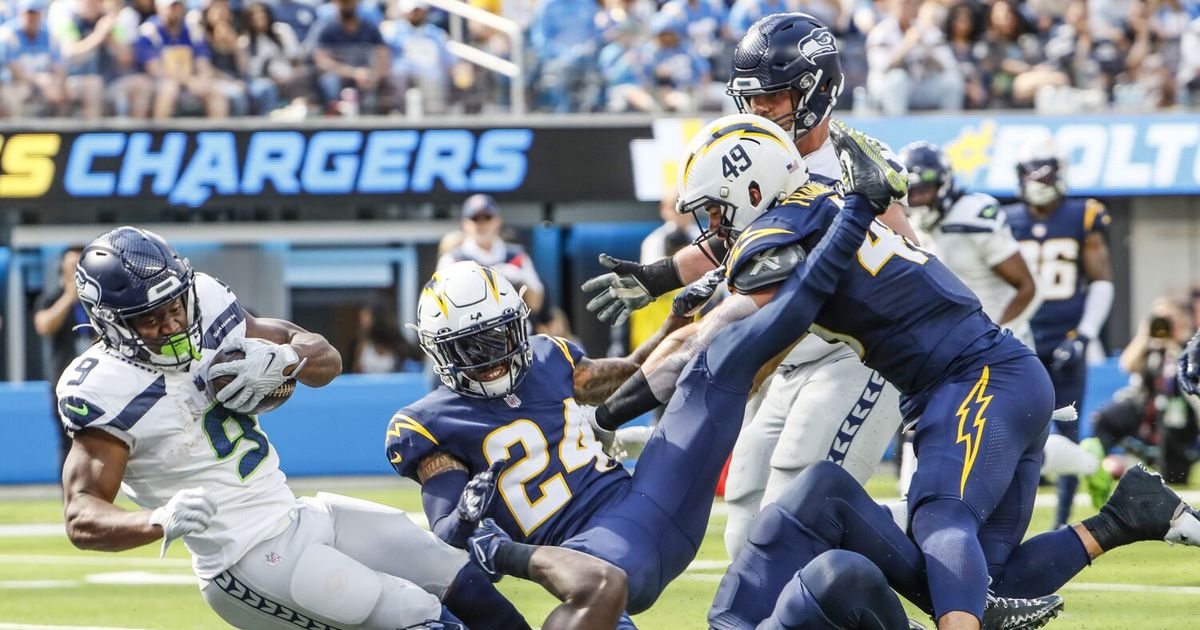 Seahawks: The Hawks are dealing with a series of injuries to their running backs. However, it doesn’t look as if they will be in the market for additions. … Kenneth Walker III’s injury is a “jammed ankle,” whatever that means. Maybe only Pete Carroll knows. … Bobby Wagner played exceptionally well but afterward, everyone got along just fine.

Mariners: Day One of the Winter meetings were anticlimactic – for the Mariners. Some foundations for future actions might have been built, however. … Scott Servais is happy with the recent additions.

Kraken: Shane Wright is back. His confidence is restored.

• My thought is simple. All of USC’s players should have opted-out of the Pac-12 title game. Then changed their mind after the game was over. A simple move. It would have assured the Trojans a spot in the CFP. There, we fixed the screwed-up system. You are welcome. Until later …