A GRIP ON SPORTS • Oh my goodness. How did that happen? It is fall already? How can that be? Well, we may no longer have summer to share but we do have more events to watch on the weekends. A fair tradeoff? No way. 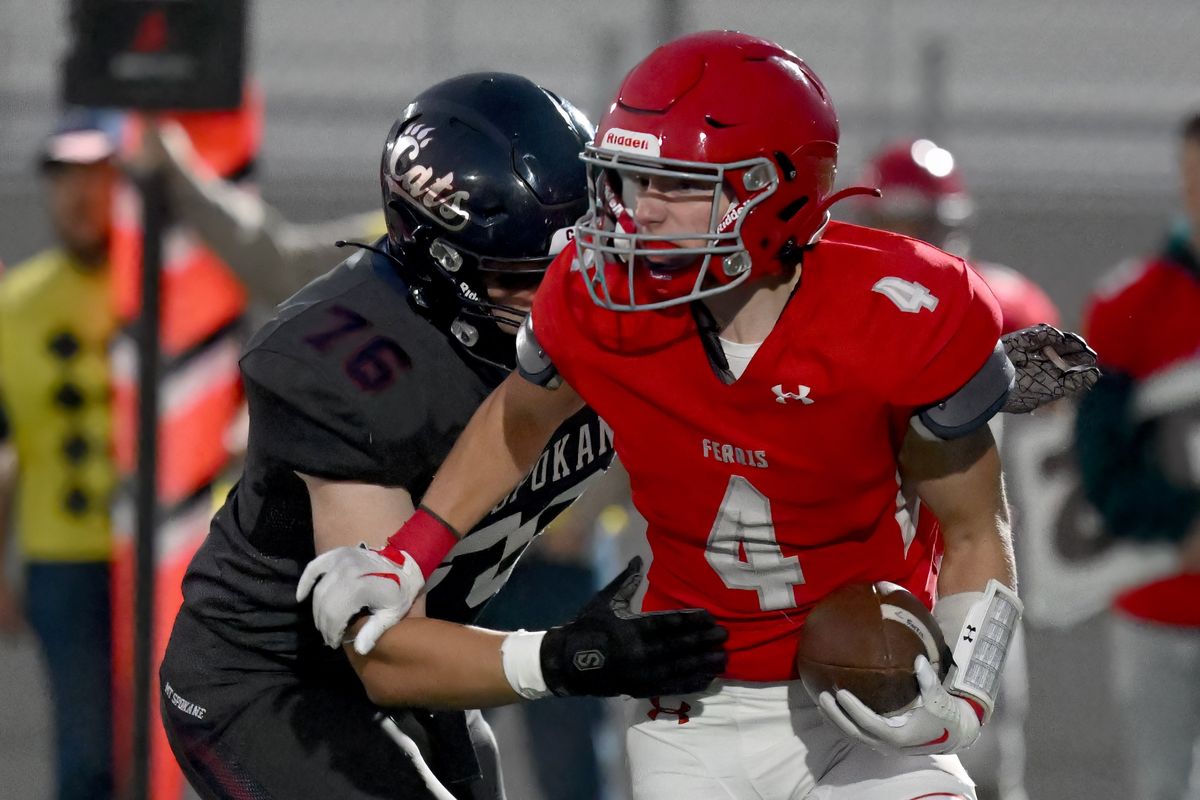 • Let’s get this straight. Summer is the best season. There is no debate. As much as we love spring and our wife loves fall – and, yes, somehow, we’ve stayed together for 43 years – and our old friend John used to rave about winter – he’s the only one – it doesn’t matter. Summer is ranked No. 1.

But when it comes to sports on TV, there are few weekends that matchup well with some we get in the fall.

Like this weekend. And there isn’t even postseason baseball to throw into the mix just yet.

There is, however, postseason golf. Or something similar. An international competition. The U.S. vs. the World. OK, it’s the President’s Cup, not the Ryder. The younger brother. Still, rooting for the U.S. of A. against anyone on the field of (somewhat-friendly) competition, is fun. It’s on the Golf channel today and on NBC over the weekend.

But it isn’t headliner. Nope. That would occur in the mid-afternoon Saturday on Fox. Pullman will be rocking. No. 15 Oregon against the unranked (and undefeated) Washington State. One team a little overvalued (maybe) and the other underappreciated (certainly). Tee it up and figure out who is better. It’s what college football is all about.

One of the teams that is part of WSU’s 3-0 record, Wisconsin, gets its opportunity to show that game was a fluke (and help the Cougars’ national reputation) when it travels to third-ranked Ohio State tomorrow. That game is on ABC starting at 4:30 p.m. 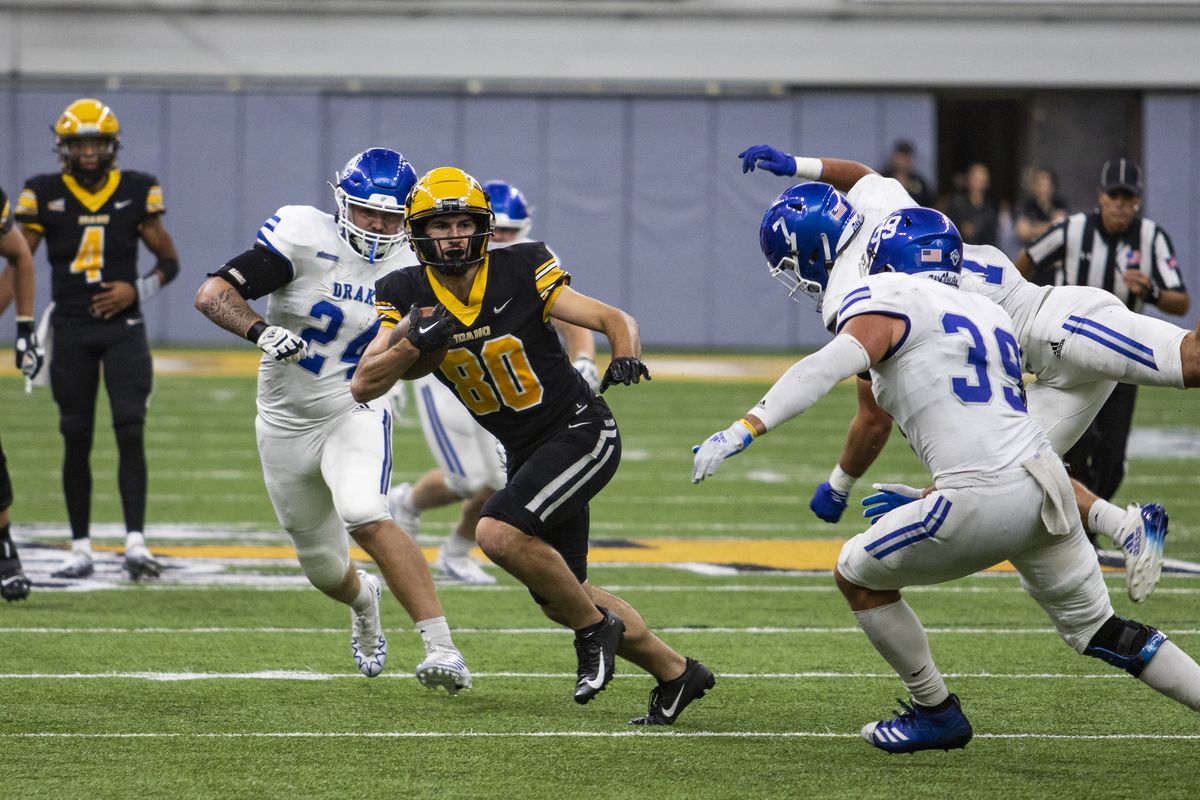 What else is good? On the local level, SWX has Eastern Washington’s Big Sky Conference opener against Montana State. It begins at 1 p.m. as well. And the Pac-12 Network has the second-best conference game this weekend, as seventh-ranked USC travels to Corvallis for a showdown with 3-0 Oregon State. It begins at 6:30.

Football isn’t reserved for Saturday, however. The NFL takes over Sunday as usual. If you aren’t a RedZone fan … why the heck not? But if you aren’t, the full games are pretty boring outside of the Seahawks hosting Atlanta. Come to think of it, that’s not all that exciting either if you drop the hometown edge. The Hawks will be on Fox this week with the late-afternoon 1:25 start.

If you want to watch pennant-race baseball instead, you’re almost out luck. As September winds down, only the National League East actually has anything resembling an old-fashioned pennant race. And thanks to the new-fangled scheduling system, the teams in the thick of those chases aren’t playing each other right now. However, we all have a vested interest in the Mariners’ quest to end the long postseason drought. And they are in Kansas City, home to a franchise that emerged from obscurity, appeared in two World Series (won one) and returned to the shadows, all while the M’s went through their long playoff famine.

There is more, however.

The snow has yet to fly – thank goodness – but hockey is back. The Chiefs aren’t on TV but you can listen to their game tonight and tomorrow from Victoria on 103.5 FM. That’s always fun, especially if you are driving from Spokane to Pullman – and back.

And, as usual, there is NASCAR and soccer throughout the weekend. It may be fall but there is no fall-off with your viewing options. Don’t forget. Summer is just nine months away. 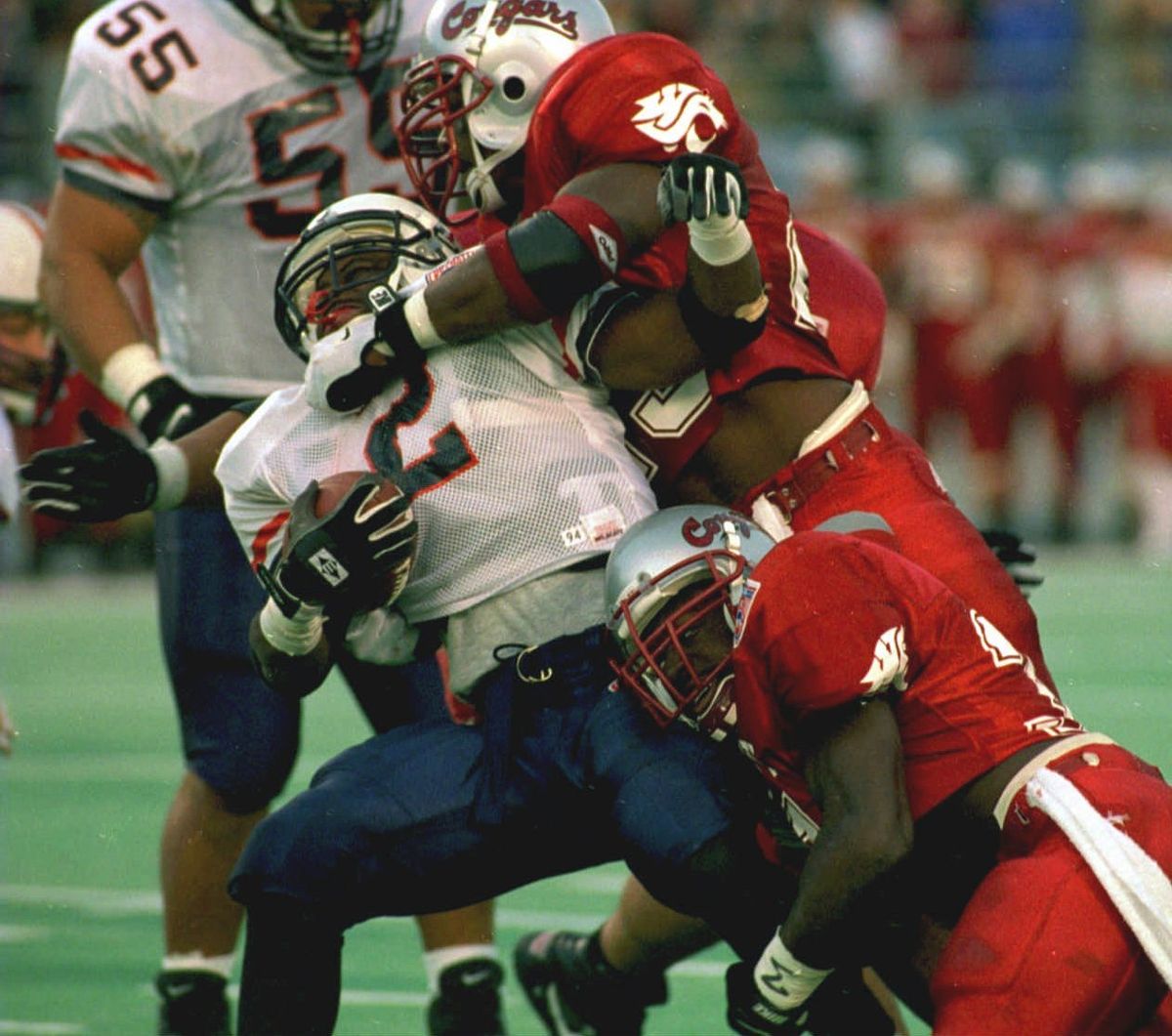 WSU: We asked a couple weeks ago what to name this year’s Cougar defense. After all, it had the chance to be pretty darn good and deserved a Harry Missildine-like moniker akin to the Palouse Posse. Well, Colton Clark takes up the banner today, calling for nicknames within his story on the emergence of this group. … The anchor of this year’s defense, linebacker Daiyan Henley, is the focus of Oregon’s offense coming into tomorrow’s contest. … A few guys who Missildine wrote about back in the day, the 1972 WSU team, will hold a 50th reunion of sorts this weekend in Pullman. Peter Harriman has that story. … Elsewhere in the Pac-12 and college football, the UC Regents discussed UCLA’s move to the Big Ten yesterday. Nothing was said after, though it was reported the Pac-12 sent a letter to the body urging it to keep UCLA in the conference. … Besides that story in the Mercury News, Jon Wilner has his picks in the S-R as well as a preview of the weekend and an interesting stock report. … Bruce Feldman is picking WSU to upset Oregon. … Washington’s play caller has come a long way in a short time. He will have to be on point against Stanford. … Moms are always important. For everyone. Including one Oregon State receiver. … USC will be without a key pass rusher against the Beavers. … The seat is getting hot for Colorado’s Karl Dorrell, the former UCLA coach who faces the Bruins this week. … Arizona State has an interim coach and is searching for a permanent one. Utah will try to make life miserable for the current guy. … Arizona will try to speed past California. … In basketball news, the best point guard in the nation when we were in high school was never UCLA’s Greg Lee. At least not to anyone but myself. He was the person we patterned our game around. His passes to Bill Walton are still etched in our memory. Lee died yesterday at 70. 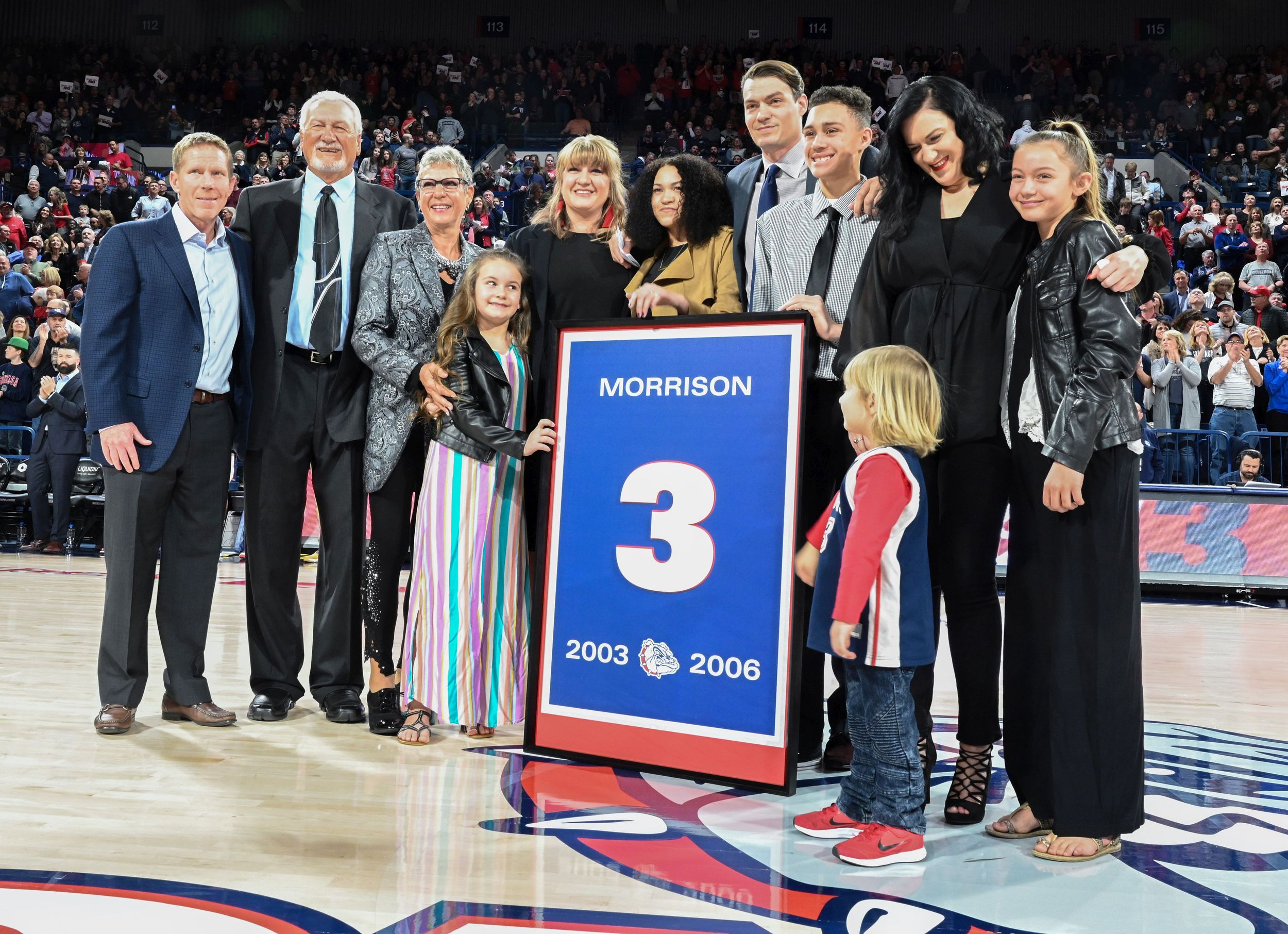 Gonzaga: The latest class to be inducted in the Inland Northwest Hall of Fame is headlined by Mead High and Gonzaga University great Adam Morrison. Theo Lawson has more in this story. … Kelly Olynyk has been traded again, this time to the Utah Jazz. Jim Meehan has more. … Drew Timme is mentioned in this Athletic story on players with a lot to prove this season. Huh. … Around the WCC, Portland has some of the best soccer programs in the nation. 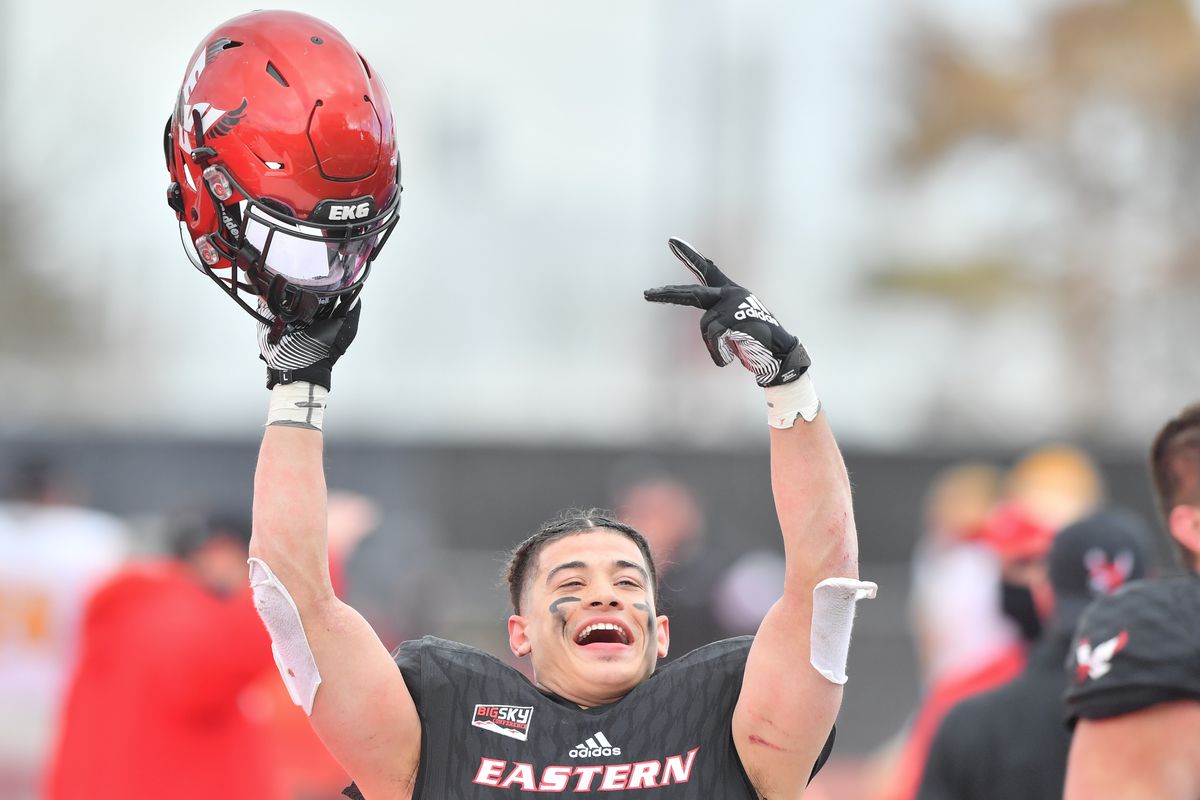 EWU: Anthany Smith is a leader of the Eastern defense. Dan Thompson has more on the defensive back. … Elsewhere in the Big Sky, giving up baseball turned out to be the turning point for one Montana player. … Montana State will rely on its creative running game this weekend in Cheney. … Northern Colorado is probably better than Idaho State. … A Weber State player changed positions and it worked out really well.

Idaho: Hayden and Hogan Hatten really wanted to be recruited by Northern Arizona. But the feeling wasn’t mutual. When the Vandals face the Lumberjacks on Saturday, they’ll try to show, once again, what NAU missed out on. 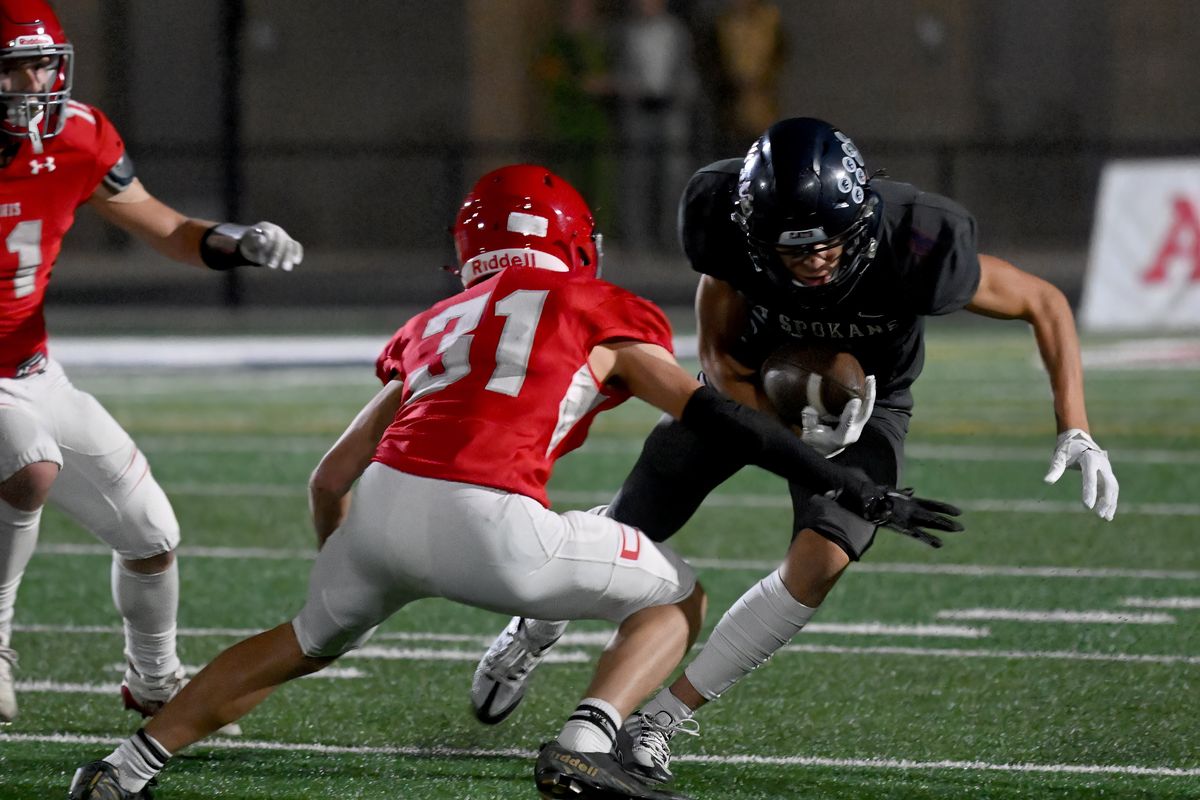 Preps: It was a busy Thursday in the area. Dave Nichols has a roundup, sure, but he also covered Mt. Spokane’s rout of Ferris at Union Stadium. … Madison McCord checks in with a story on the area’s premier volleyball tournament now carrying Buzzie Welch’s name. … Jim Meehan shares the news Mead senior Ben Jones playing hookey. He has good reason. He’s playing golf at two of the nation’s premier courses for First Tee.

Chiefs: We mentioned the two games in Victoria above. We can also pass along this preview of the WHL openers. 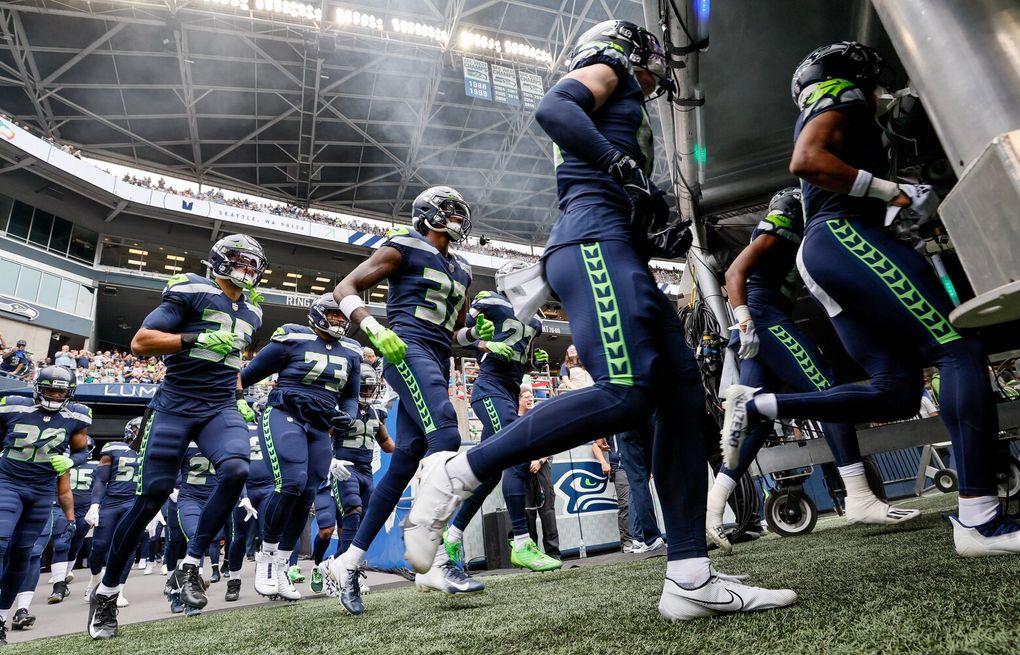 Seahawks: The Hawks need to score. Duh. … The Falcons are in town. Over the next few weeks Seattle will play teams with top draft picks at quarterback. It’s a cautionary tale. … We shared earlier why we think Darrell Taylor will struggle this season. … Geno Smith doesn’t feel he’s been shackled.

Mariners: Who would have thought Jarred Kelenic might have saved the M’s season? In July we mean. This morning, it seems obvious. He had two big hits in his first game back, leading Seattle to a 9-5 victory over Oakland. … Here’s the bad news. Julio Rodriguez’s back acted up yesterday and everyone is concerned. That means we all should panic. … The guys who keep the field in shape never panic.

Kraken: The first year is over. The second one needs to be better to keep Seattle interested.

• Back on the road again today. Headed to a high school football game in Northern California. Yep. Going to watch our nephew’s offensive line. He’s a high school coach, which makes us proud, as we remember him knocking us over when he was 3. We’ll spend the entire game screaming “hey Fryan, when are you going to put my kid in?” You know, like everyone else. Just to make him feel appreciated and loved. Until later …